This week’s entry is about the 2002 Broadway Revival Cast Recording of Man of La Mancha.

My previous exposure to this musical has been limited to a Broadway revival from thirty years ago - when I was probably too young to appreciate it - and a very pallid local production, so I was very pleased to rediscover this collection of uniformly beautiful songs with concise, passionate lyrics. This recording, featuring artists who are up to the score’s considerable challenges, is definitely a rewarding musical experience.

I’ve always considered Brian Stokes Mitchell (in the obviously central role of Cervantes/Don Quixote) to have a voice that is powerful but can seem, for lack of a better word, a little distant. This makes him a perfect choice for a larger-than-life character like Quixote. His interpretations of legendary songs like the title song and “The Impossible Dream (The Quest)” are truly intense and thrilling, and even out of dramatic context they still manage to belie the noble self-deception inherent in the character. The overall effect is perfect. 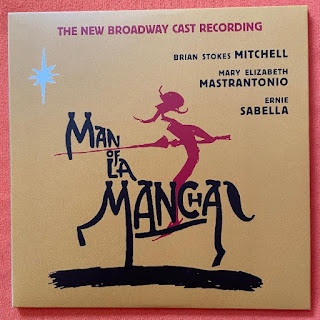 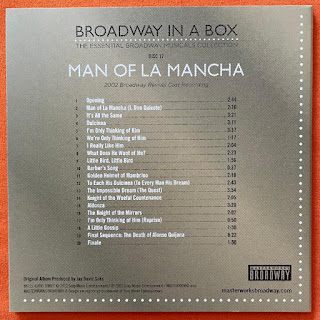 Mary Elizabeth Mastrantonio is almost as strong as Aldonza, with a voice that is lovely and full of character. Only once or twice, as in the final note of “It’s All the Same,” did I get the impression that her voice may be just slightly too low to be an ideal fit for the score. I would also add that, at least in her singing, she doesn’t draw quite as abrupt a distinction between fantasy Aldonza and prostitute Aldonza as Sheena Easton did back in 1992. But this is still an interesting and beautiful vocal performance, and these quibbles didn’t really do any harm.

The rest of the casting is equally solid and vocally quite varied, which is always a big asset when one is following a story from a cast recording. Ernie Sabella (Sancho) has a wonderfully rich comic singing voic; it was delightfully obvious that this is one of those roles that in retrospect we would call “queer-coded.” Natascia Diaz (Antonia) has a darker and deeper voice that contrasts nicely with Mastrantonio’s. Similarly, Mark Jacoby’s (Padre) simple but gorgeous delivery of “To Each His Dulcinea” makes for a nice complement to Mitchell’s more stylized voice. 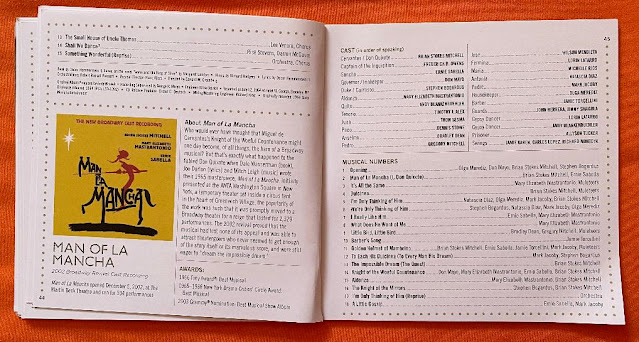 The quality of the recording itself is outstanding. Every word from these intricate lyrics is crystal clear, even to someone like me who hasn’t heard them very often or very recently. The balance between the soloists, the chorus, and the musicians is perfect throughout; with the orchestra in particular, everything is vibrant: tutti outbursts (in the title song), tender musical moments (in the finale), little woodwind details (like the clarinets in “I’m Only Thinking of Him”), and of course the guitar that gives the score so much of its particular character. I would certainly be interested in seeing and hearing these songs on stage once again.

Next up is the Original Broadway Cast Recording of My Fair Lady.

Thanks for such a thoughtful review, Mike! Fun fact: Man of La Mancha was my first musical. My Fair Lady was my second! Looking forward to your thoughts on that classic. --Jeff