This week’s entry is about the 1987 Original Broadway Cast Recording of Into the Woods.

I’ve been familiar with Into the Woods, and this CD in particular, for the majority of my life, so this is another one of those recordings that’s hard for me to evaluate from a fresh perspective. Rather than a review, I’ll just offer a few observations that came to mind while I listened to this OBCR once again. 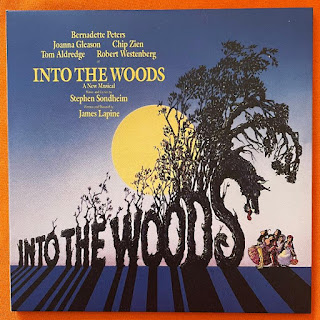 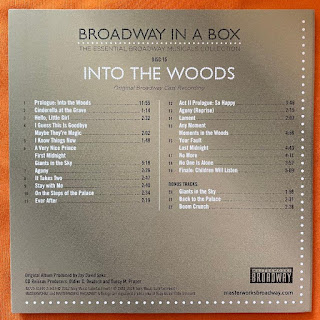 Even from an audio recording alone, it’s easy to appreciate why some of the original Broadway performances remain legendary to this day. Bernadette Peters is at the peak of her game as the Witch; from moment to moment, she is fully in control of the volume and quality of her voice, which makes her perfect for a role that requires sudden and dramatic shifts in tone. Joanna Gleason is by turns funny, earnest, and heartbreaking as the Baker’s Wife, in all her complicated glory; it’s easier to see why she won the Tony Award, and why her successors have sometimes had a hard time competing with her achievement. Although it’s the women who really shine in this show, I’ll also mention Chip Zien as the Baker, probably the roundest of the adult characters, who does a terrific job with one of my personal favorite songs, “No More.” 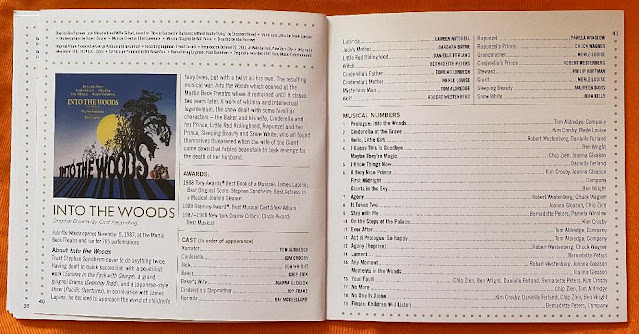 A fresh listen to this CD reminded me of what a marvel the orchestrations are. Working with what has to be one of the smallest Broadway orchestras of his long career, Jonathan Tunick manages to wring out the brassy bravado of “Agony,” the seductive jazziness of “Hello Little Girl,” the poignant warmth of “Moments in the Woods,” and of course lots of catchy jauntiness throughout. Thanks to Tunick’s unique genius, this is one score that I don’t think would benefit from a significantly expanded orchestra.

Last year I read the pared-down version of Mark Eden Horowitz’s fascinating book Sondheim on Music, based on interviews between the author and composer. In the section on Into the Woods, Sondheim discusses what he calls the “bean theme,” noting that “the story is in a sense about the bean theme,” and encouraging the listener to “look below the surface and see how this theme is twined into the show throughout, and how it’s reflected in so many ways” (pp. 84-85). As I re-listened to this cast recording, I took the opportunity to listen out for this theme, and it is definitely ubiquitous throughout the score. Some of these appearances are obvious if you pay a little bit of attention; the tune is the one that Rapunzel sings to herself, and it forms the backbone of several songs, including “Giants in the Sky,” “Stay With Me,” and “Moments in the Woods.” Other uses are more hidden; it can be heard several times in the accompaniment of the opening sequence. I readily admit that I would never have noticed the inversion of the theme in the melody of “No One Is Alone” if it hadn’t been discussed in the text.

The CD in this collection has three short bonus tracks, all from a demo recording for a proposed children’s version of the show. (I don’t know Into the Woods JR. well enough to tell whether these versions made it into the final product.) John Cameron Mitchell sings a slightly edited version of “Giants in the Sky” at breakneck speed, and it’s nice to hear this song performed by an accomplished singer not trying to sound like a kid. Kim Crosby (also Cinderella in the actual cast recording) sings a song called “Back to the Palace,” which is apparently an early version of “On the Steps of the Palace.” Maureen Moore sings the well-known cut song “Boom Crunch,” replaced by “Last Midnight,” but doesn’t quite have the expressive range to fully sell it.

Next up is the Music Theater of Lincoln Center Cast Recording of The King and I.