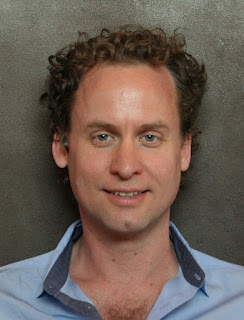 What I loved most of all about The Visit was that it grabbed a hold of you from the moment you entered the Lyceum Theatre and didn't let go of you until hours after the final bows. Heck, I still think about that stunning show and it haunts me. The one element of that production my mind always goes to is Japhy Weideman's stark, yet bold, lighting design.
Favorite Designs:
Lighting Design for The Visit
Walking into the oldest continuously running Broadway theater always brings with it as sense of occasion and history. With this show, there was the added sense of gloom and mystery, what with Scott Pask's stark, dilapidated set that suggested many locations all at once of a society in decay. Importantly, Weideman's equally stark lighting only allowed for specific glances of those places, with beams of light full of dust and smoke that shown down, but seemed to evaporate before hitting the floor. The shadows - not quite completely black - seem to both beckon and push you away. Impending doom pervaded the air.

Later, as the show progressed, the starkness and light versus darkness continued, but shifted, revealing new layers and hiding old. Shafts of bright white greeted and then followed The Visitor (Chita Rivera) and her odd minions. During times of high stress and conflicts these beams would cut across the stage like a horizontal stripe, with darkness above and below, stretching like a barrier to keep those on stage from cutting out into the world. 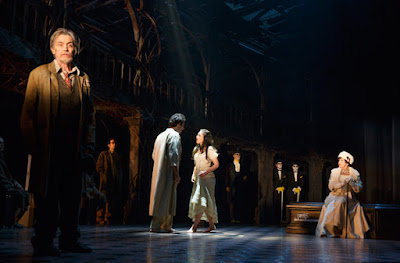 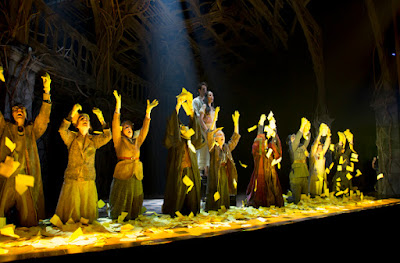 Only twice did the harsh whites, smoky grays and cold blues give way to something different: pools of warm amber to illuminate memories of better times, and a startling bright yellow that shown on the inhabitants of the town as they embrace to visitor and promises of something different. But this is not the yellow of a new age dawning. It is a caution light screaming out to warn all of us not to be taken in. The image of these poor people scrambling to get their share in this yellow hellscape is something I've actually had recurring dreams about.
An excellent lighting design can stick with you, just as much as sets, costumes and the performance itself.
Posted by JK at 1:59 PM