Broadway in a Box CD Review: The King and I (1964 Lincoln Center Theater Cast)

This week’s entry is about the 1964 Music Theater of Lincoln Center Cast Recording of The King and I.

Some shows, like How to Succeed… from a couple of weeks ago, lend themselves to cast recordings that stand on their own in terms of musical storytelling. I don’t think The King and I is one of those shows, and this competent but undistinguished Lincoln Center recording neither adds nor detracts from that impression.

Don’t get me wrong - this score is full of great songs, some beautiful, some quite fun, but most of them not very dramatic, in the sense of building a story and moving it forward. The first act, especially, is dominated by lush but slow-moving introspective ballads (one of which, “Hello, Young Lovers,” is one of my two favorite Rodgers and Hammerstein songs), plus a similarly textured love duet. This general homogeneity is not really a problem in the context of the larger story we’d see on stage, but it doesn’t make for a particularly exciting cast recording. The second act is much more dynamic, but also rather short on this CD, which omits several reprises of songs from the first act. 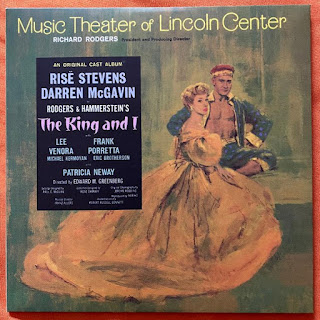 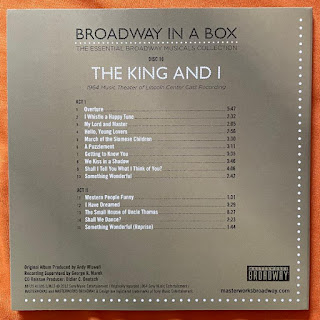 This recording boasts a huge and talented Lincoln Center chorus and orchestra - I could listen to the amazing overture all day long. Otherwise, most of the individual elements are polished but not particularly remarkable. This applies, first and foremost, to operatic soprano Risë Stevens (Anna Leonowens), who of course has the vocal abilities necessary to tackle this score, but does not add much in the way of personality. She’s at her most interesting when she attempts an early-Disney-princess sort of chirpiness in her jauntier numbers, like “Whistle a Happy Tune.”

Darren McGavin is similarly middle-of-the-road as the King, with an appropriately broad set of vocal gesticulations, but otherwise without much sense of really inhabiting the character; his accent is vague and sporadic. Of course, it’s hard to listen to a performance like this in 2022 without there being some kind of cringe factor at the lack of authenticity from both the writers and the performer. Along those same lines, I was slightly bothered by the fact that the chorus of the King’s wives and children would sing using the Queen’s English (“Getting to Know You”) or stereotypically strained syntax (“The Small House of Uncle Thomas”), depending on the momentary requirements of the story. 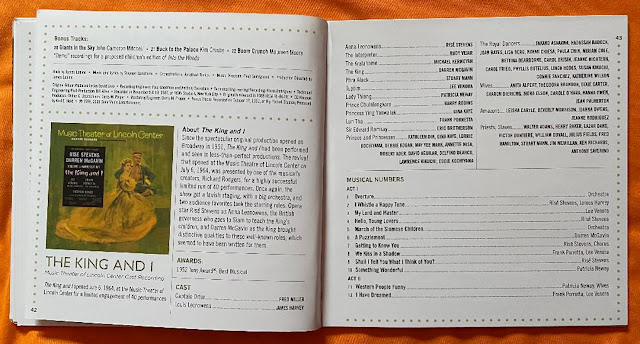 Despite my lack of enthusiasm for this recording, there were several highlights. The best vocal performances belong to Lee Venora (Tuptim) and Frank Porretta (Lun Tha), who deliver passionate versions of their two duets, “We Kiss in a Shadow” and “I Have Dreamed.” The recording also comes alive in the first part of the second act, beginning with a vivid performance, led by Patricia Neway (Lady Thiang), of the provocative “Western People Funny.” (Do the ironic lyrics here imply that the creators knew that there was something a little peculiar about people like them making a show like this?) Finally, “The Small House of Uncle Thomas,” always a highlight in this score, doesn’t disappoint here (cringe factor notwithstanding).

Next up is the 2002 Broadway Revival Cast Recording of Man of La Mancha.

Thanks for another great write-up. It is always interesting to look back at vintage recordings, consider how they are a product of their time, and to recognize what holds up and what doesn't. Looking forward to next week - Man of La Mancha was the very first show I was ever in! --Jeff

Labels: Broadway in a Box, CD Collection, CD review, The King and I