I really had no intention of continuing the baseball theme I started yesterday.  But about 3 hours after my Wednesday blog (Mr. Broadway August) posted came news that my choice, Julian Ovenden, was leaving Death Takes a Holiday, with his understudy, Kevin Earley (left) permanently taking over the role of Death.  And that got me to thinking about the baseball I recently attended.

In baseball, a change of pitcher (actually multiple pitchers) is an expected, planned for part of the game.  It is not unlike an actor having an understudy or two, not to mention a stand-by.  Baseball has two other things in ther mix, generally not used as often as the pitcher change, and certainly more on the fly.  Those things are pinch hitters and pinch runners.  Now, I'll admit I don't know the intricacies of the rules of America's pasttime, but from what I have seen, pinch runners/hitters come into the game ready, but unscheduled (again, like understudies and stand-bys), for a couple of reasons: the player they are replacing is injured or has a bad time facing a new pitcher.  The difference is a fine line, not unlike that between understudy and stand-by.  But a pinch player permanently takes the place of the player in the game.  So... if a show's run is "the game," and someone comes in unexpectedly to replace an actor ("player") they are like pinch hitters/runners.  And this is still different from scheduled cast changes.

To sum up: Brooke Shields replacing Bebe Neuwirth in The Addams Family, is a planned on change, like a relief pitcher.  Kevin Earley taking over for an unexpectedly ill Julian Ovenden  for the rest of the run of Death Takes a Holiday is a pinch hitter going in to keep the game going.

In theatrical terms, this scenario is best summed up by one of the longest running musicals (and longest running revivals, too) in Broadway history, 42nd Street.  In that show the mega-talented but uber-mousy chorus girl is plucked from obscurity to take over the lead in a huge show from an injured diva.  The girl goes on the be a mega-star.  They say life imitates art. 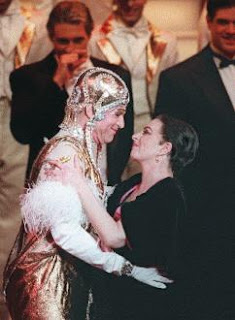 Liza's curtain call;
Tony and Liza hug
One major star has generously gone on TWICE as a pinch hitter.  Most recently, she took over the title roles in Victor/Victoria to spell an unexpectedly ailing Julie Andrews. (At the time it was simply Liza taking over for a vacationing Julie, but Andrews was on vocal rest, etc.)  That take over had some subdrama - Minnelli and Tony Roberts reportedly hated each other - he staged a sickout to protest her poor performance; she missed five shows, claiming illness, even supported by a doctor's note.  They famously hugged at the end of her run - see photo.)   But even more famously, this legend took over the role of Roxie Hart from fellow legend Gwen Verdon in the original Broadway production of Chicago.  I'm speaking of none other than Liza Minnelli, a true superstar in her own right, taking over for two other superstars in their time of need.  These three divas are the epitome of "the show must go on." 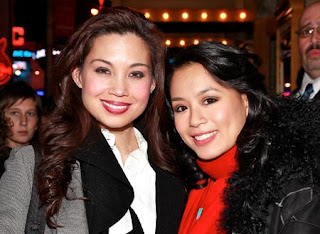 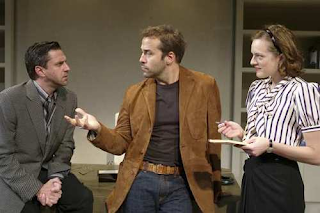 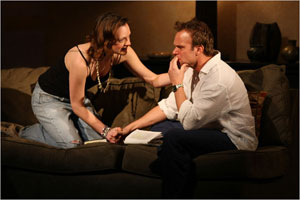 Piven and Butz in Speed-the-Plow
The 2011 winner of Best Actor in a Musical, Norbert Leo Butz, has been a pinch hitter.  A couple of seasons ago, he found himself in the position of take over actor in the revival of Speed-the-Plow, when Jeremy Piven abruptly left that production for infamous "health reasons."  Butz even went so far as to go on script in hand for several performances so the show could go on.  Eventually, William H. Macy finished the run. 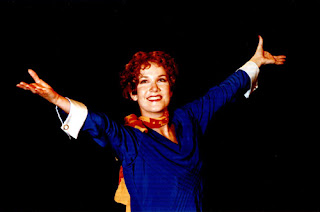 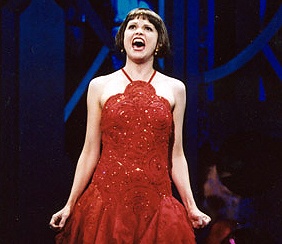 Erin Dilly and Sutton Foster
as Millie Dilmount
And the 2011 winner of Best Actress in a Musical, Sutton Foster, arguably has the career she has because she was a pinch hitter.  The show: Thoroughly Modern Millie.  The original star - in this case - stars: first Kristin Chenoweth, who was the original Millie, left the show for a television series that suddenly came her way.  Then came Erin Dilly, whose image is still on all of the Broadway logo material.  She wasn't working out, was axed and her understudy, one Sutton Foster stepped in for the out-of-town tryout, and was a sensation.  The search for the Broadway Millie was ended immediately, the show was retooled to really fit Foster and poof! The pinch hitter becomes a star!  From the obscurity of the choruses of Grease!, The Scarlet Pimpernel and Les Miserables to leads (and several Tony nominations) in Little Women, Shrek, The Drowsy Chaperone and now, a Tony-winning turn in Anything Goes.

Pinch hitters keep the game going.  Ball players step up to the plate to give their team a better chance against their opponents when other players get hurt.  Broadway actors do just the same thing to keep the show going.  In both cases, it is a win-win for fans.

TRIVIA QUESTION #5
Follies director Eric Schaeffer directed all of these musicals on Broadway EXCEPT:

CLICK HERE FOR THE COMPLETE CONTEST RULES AND TRIVIA QUESTION #1.
Question #2 is with Tuesday's blog, question #3 was with Wednesday's blog and #4 was with yesterday's blog.

Rate the blog below and leave your comments here, or via email at jkstheatrescene@yahoo.com, or Tweet me!
Jeff
2.342
Posted by JK at 10:25 AM