Grade for Glee fans: A

For the uninitiated: watch the show first, then get the concert on DVD.

Being one of only two people in a movie theatre, the other being my friend Mike, helped erase the potentially creepy feeling we might have had being the only adult men at Glee: The 3D Movie Concert. But there we were at a matinee of the film, 3D glasses on, smiling like fools and tapping our feet. The truth is, we are both Gleeks, and we both really enjoyed the movie. Will it convert those who haven’t joined the Gleek ranks? Not likely, since it gives real fans everything it wants, and doesn’t try for any more than that. But it could put to rest any doubt as to the talent of the cast. They are as terrific live as they are on an edited TV program. 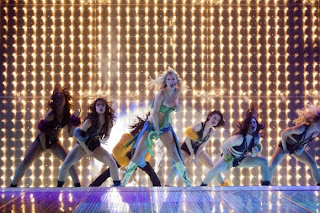 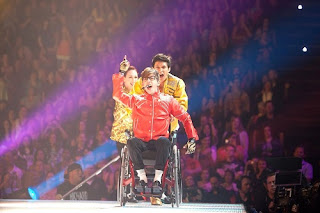 This film is a mock-umentary that chronicles the teenage hormones, fragile egos and incredible talents of the New Directions glee club as they hit the “big time” playing to a sold-out arena. Between signature numbers like “Don’t Stop Believin’” “Don’t Rain on My Parade” and “The Safety Dance, “ we bear witness to Rachel’s drive and insecurity, Artie’s bravado and insecurity, and Brittany’s sweet ignorance and lack of insecurity. Plus we get some smiles from Mercedes, Blaine, Kurt, Puck and Santana. And all of it very tongue and cheek, and all with the TV series’ sharp wit and irony. Gone, though, is the “losers are people too” aspects of these characters. Instead, the glee kids of McKinley High School in Lima, Ohio are big stars, basking in the glow and adoration of the masses. 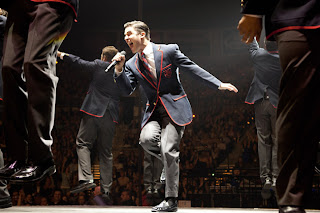 The masses, as director Kevin Tancharoen skillfully reminds us, are the real life Rachels, Finns, Brittanys and Kurts. The people who are or were on the fringe of mainstream popularity in high school, the displaced, the bullied… the losers. In between the fantasy world of high tech Glee concert numbers are real documentaries of the very people Glee aims to entertain and emulate. A little person who is also a championship cheerleader, who used to fear never being seen as just another girl, rises above it all to compete for Homecoming Princess with a cute jock boy on her arm. Then there is young woman with severe Asperger Syndrome, unable to maintain normal friendships or cope with social situations, whose attachment to the character Brittany allowed her to recognize that she could, in fact, find friends who could accept and love her. Meeting the actress (Heather Morris) apparently - unfortunately, we don’t see this meeting - helped her find the strength to not only socialize in small groups, but to attend a Glee concert with thousands. And there is the young man who, in the privacy of his own journal professes his first love for another young man, only to find his life turned upside down when his best friend shares that journal with the object of affection, who in turn shares it with the school. It is now several years later, and the young man who was forced to come out in 8th grade, has not only survived, but thrived, as a well-adjusted gay man. He pointedly tells us that had he had Glee and Kurt as role models, his life would have been that much easier to cope. Glee, he says with a very appealing low key honesty, validates him, and he hopes, everyone else who is walking in Kurt’s and his footsteps. 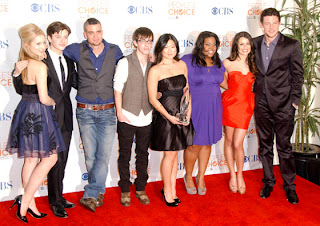 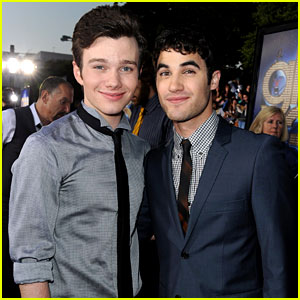 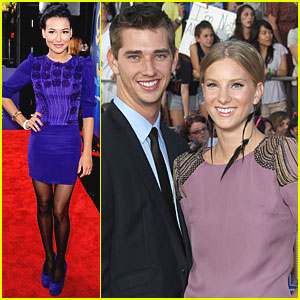 I re-read the previous paragraph and can only imagine what you are thinking: of course these hard luck stories are told to support the Glee promotion machine. And maybe that’s the surface explanation for their inclusion. But it also makes one realize that at its heart, Glee is there for all of us who felt like a loser or still do. That idea is also much more subtly supported by the “man on the street interviews” of concert goers, who tell us why they love the show, which characters are their favorites, and how the show touches their lives. Yes, I said “subtly.” Because nothing says “relatable” like shots of the most diverse audience I think I have ever seen - young, old, gay, straight, handicap-able people, parents, teens, small children, and every race on Earth. The pretty “Quinn” girls are there, singing joyfully along with the chubby “Laurens,” the lady killer “Pucks” right next to the refined “Kurts.” And there are legions of fans sporting the signature “defining words” t-shirts from the “Born This Way” showstopper, and the hundreds of Dalton Academy Warblers fans decked out in private school blue and red blazers and striped ties. In short, Glee is blissfully all-inclusive, and even a fantasy concert brings that all-inclusive mass of humanity to its nearest stadium in droves. 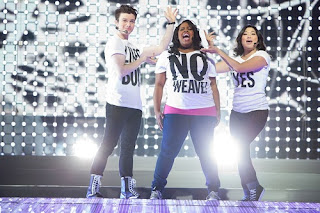 And that concert, actually made to feel more “you are there” with its skilled use of 3D filming, is a true Glee-fest, with all of the best numbers from seasons one and two carefully recreated and then amped up to fit the stadium size with special effects that support, but don’t overwhelm the kids we are there to see. To be honest, I would have liked to see more of Kurt (Chris Colfer), Quinn (Dianna Agron) and Sam (Chord Overstreet), but beyond that, fans of the show won’t be disappointed. A fine balance of production numbers and smaller, one-character numbers are presented. Puck’s (Mark Salling) tribute to plus sized ladies, “Fat Bottomed Girls,” is as spectacular for its simplicity as the all out sexy vamping in Brittany’s (Heather Morris) “Slave 4 U” is for its amazing choreography and production values. Gwyneth Paltrow does a guest shot as Holly Holiday, substitute teacher, and her signature, “Forget You,” while Mike’s (Harry Shum, Jr’s) truly breath-taking dancing skills and Artie’s deep soul vocals are displayed in “P.Y.T”. Theatre fans will thrill to Rachel’s (Lea Michele) stunning “Don’t Rain on My Parade,” and future Finch Blaine’s (Darren Criss) lead vocals on “Teenage Dream/Raise Your Glass.” And Mercedes (Amber Riley), Santana (Naya Rivera) and Tina (Jenna Ushkowitz) all shine in fun numbers where they are featured, too.  To a person, the whole cast looks to be having the time of their lives. That joy of performing radiates off of the megaplex screen as it does the flat screen at home.

That a huge arena concert film can still feel as personal as a television program is a testament to the quality of this film. And maybe the best number of the show, “Born This Way” is as exciting to watch as it is heartening to be reminded that we are all, in fact, Gleeks. I had no reason to feel creepy after all.

P.S. - Be sure to stay through the Slushy-filled credits with those 3D glasses on, and stay for the encore number, too. You will not be disappointed.

Rate this blog below, and leave your comments here, by email ay jkstheatrescene@yahoo.com, or Tweet me!
Jeff
2.361
Posted by JK at 11:58 PM