The minute you walk into Stage 1 at New World Stages, you know that this RENT definitely looks different than the iconic, long running Broadway production that closed just three years ago.  And pretty much after the first few seconds of the show, it is apparent that this version is not much like the original production in most ways.  To be sure, RENT is exactly the kind of show that is ripe for re-examination and interpretation.  Its themes are broad and timeless, its characters simultaneously larger types and specific people.  Like the opera upon which it is based, the show could be reinvented any number of ways.

What is surprising is that its original director, Michael Greif, who helmed the show to multiple Tonys and a Pulitzer Prize, pretty much missed the mark.  With this new production, Greif has, well, turned an event into a musical.  A busy, fussy musical that seems intent on making enough noise and visual frenzy to cover the unfinished work's plot holes and under-developed characters.  I mean even the staunchest of RENT-heads have to concede that Larson's brilliant work has many areas that, had the author lived, would have been fleshed out.  Where the original production had the guts to put it all out there, bold, unfettered by over- theatricalization, thus allowing audiences to soak up the energy and vitality of this group of lost souls, this revival seems determined to cover up the flaws - and nearly all of the brilliance - by cramming these 20-somethings onto a claustrophobic jungle gym of a set, which is in constant motion, with a dozen playing areas and screens of projections taking up all available space on the stage. 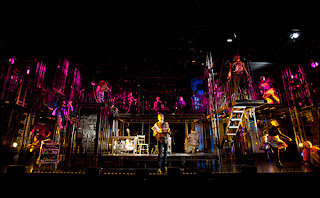 Mark Wendland's cramped set looks much like his black erector-set set for next to normal, if there were three of those sets put together in half the space.  Maybe he is trying to imply that these kids on the verge were stuffed into smallish confines of Alphabet City.  Were they really that cramped?  And the way the cast has been directed to constantly crawl around the girders, ladders and platforms is more Cats than anything else.  And, because there is SO MUCH set, cast members are constantly partially obscured, as are the completely unnecessary projections supplied by Peter Nigrini, which I suppose is for the best.  They feel, at the best, like an attempt to add production values, and at worst a visual Wikipedia of events leading up to 1991 (where the show is firmly proclaimed to take place), so that the new generation of RENT-heads can understand a time that predates them.  (My God! Was it really THAT MANY seasons of love ago!!??)  Only the consistently brilliant lighting design by Kevin Adams works 100% of the time.  It is moody, colorful, vibrant, and helps clarify the visual clutter more than it should have to. 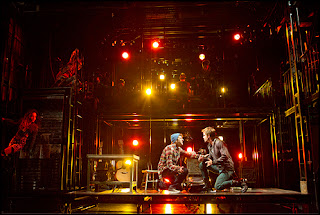 Angela Wendt's mostly unfortunate costumes do double duty: they distract because you know, if you were alive then, that most of the purposely grungy duds they are wearing are re-purposed from eras that rarely hit the 1991 mark, and/or they remind us of the original costumes.  Here is a design concept where a remarkably healthy and robust Roger sports an around the arm tattoo and skinny jeans straight from the American Eagle in Times Square can collide with a Benny who is in a costume that is identical to that worn by original caster Taye Diggs (who, even then, was wearing clothes circa 1996).  The cavalcade of fashion - including drag get ups for Angel that rarely look feminine and more like Ziggy Stardust, and high end fashion by the out of her economic element Joanne - are exactly emblematic of the production.  Some of it works (Joanne's couture), some of it doesn't (everything Angel wears, which is never close to "fierce" or worthy of calling him "her") and the rest reminds you of how great the original was, and how un-great this version is.

Greif and company have done almost everything they can to create something fresh and exciting while placating those of us who loved the original production.  (It remains among the top 3 experiences of my theatre-going life.)  By trying to please everyone, they have created a 21st century musical - loud, histrionic and fraught with meaning mostly unmined.  Today's audiences get to scream and applaud all the moments they think deserve it - like every time Angel takes the stage because drag queens are so IN or when the "Seasons of Love" soloist ululates and trills her way to notes only audible by canines.  It is as if they are trying recreate what they think the last generation of fans got from the original.  And the cast and director do their best to supply just that.  So what does it say when all of the best moments of this production are the quiet ones, unstaged and just happening as if the material has briefly taken over the company in all the best ways?  Seriously.  Even the new RENT-heads gave those moments the most adoration. 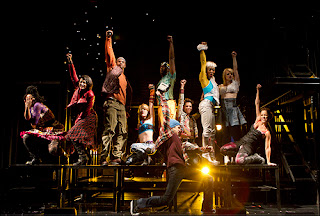 The cast on the whole is good-looking and outwardly talented.  And just like the show they are in, a closer look exposes both greatness and glaring mediocrity - Broadway caliber triple-threats mixed with American Idol/America's Got Talent in-your-face audacity.  But RENT is not a reality competition results show.  The ensemble is quite good, creating small niche characters that manage to impress even when they are relegated to the far reaches of the set, and with enough voice processing that makes Glee seem live and off-the-cuff.  (Larry Keigwin's choreography gives them something more to do, and they execute it well.  But is RENT a dance show?  Again, it creates less "event," more run of the mill "musical.")  Two ensemble members really stood out: Michael Wartella, who makes "Will I Lose My Dignity?" sweet and the waiter role actually interesting, and Morgan Weed, whose spicy presence makes "La Vie Boeheme" the group number it should be. 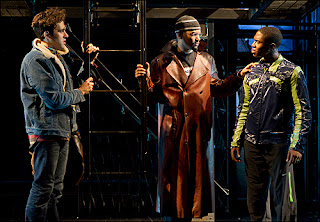 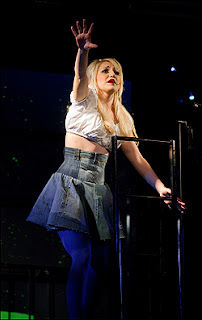 The portrayal of Benny by Ephraim Sykes only serves to point out just how underwritten the part is.  He seems to have severe mood swings - too angry in his confrontational scenes, too bland the rest of the time.  Why ever would Mimi date this guy?  It can't just be the Range Rover, can it?  Unfortunately, he is the least of the show's issues, cast-wise.  Individually, Corbin Reid is a great Joanne - smart, subtly sexy, and classy beyond the Bohemian crowd she hangs with to be near Maureen.  She oozes chemistry with Mark during "Tango Maureen" and sings the hell out of "Take Me or Leave Me."  What a shame that she doesn't have the same with Maureen, no matter how much they kiss and fondle each other.  Of course, it isn't Reid's fault.  No, that lays with the bizarrely miscast Annaleigh Ashford who corners the market on bubblehead blondes - so fun in Legally Blonde and probably as Glinda in Wicked.  Trouble is Maureen is no bubble head.  She's tough, sexy, smart and a vulnerable mess.  Miss Ashford's Maureen is none of the above.  She works her ass off - trust me, you see enough of it - trying to create "Maureen moments."  Part of what makes Maureen's performance art, "Over the Moon," work is because the humor is wry and abruptly true, and the anger genuine.  Here, there is no anger, no cause, and there is all too much humor.  She plays it for laughs, each and every deliberate grunt, pause and gesture.  The whole thing feels like sitcom high jinx, a la Lucy and Ethel, and nothing like a protest that could cause arrests and even change lives. 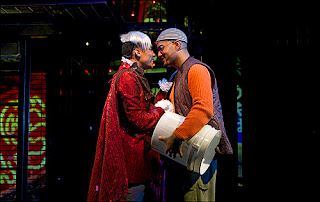 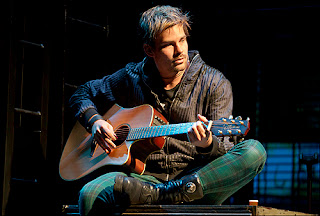 MJ Rodriguez has tough boots to fill, such an impact does his character, Angel, make in the show.  Tall and statuesque, he seems perfect, until you see the get ups he has to wear, including a gaudy red sparkly thing that is at times a shirt, a jacket train, and a cape.  See my note about the costumes above... Rodriguez sings well enough, and the part is well-written, so it would be difficult to play the role and not have the audience right in the palm of your hand.  And yet, after it was over, I found myself disappointed, as he barely makes an impression.  I was not moved to tears when Angel lost her fight with AIDS, and that disturbs me.  It also disturbs me that I felt nothing for Roger, played by the much too healthy and good looking Matt Shingledecker.  Isn't Roger sick and brokenhearted?  He looks like he just rolled in from a spinning class at a Chelsea gym.  And he comes out of the gate at full throttle - I fear for his voice long term considering the vocal blow out he gives "One Song Glory," which he sings like it is the climax of the show, not the second song of the score.  (And it points out how truly awful the "great song" "Your Eyes" is.)  And like Reid and Ashford, he has no chemistry with his Mimi. 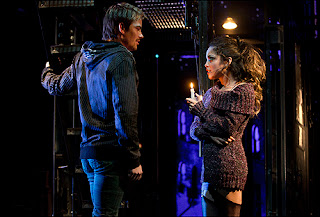 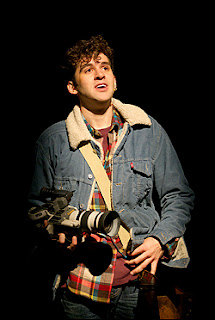 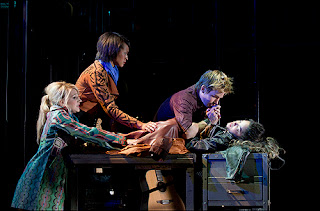 Arianda Fernandez is one of the three glories of this company, as the cheeky Mimi, who strikes a balance between gritty survivor and wounded, vulnerable woman-child.  She delivers "Out Tonight" with a ferocity that raises the hair on the back of your neck; her "Light My Candle" offers a glimpse of mystery and what might have been with a better Roger; and she plays the entire final sequence with a heartbreaking reality that offers the evening's only genuinely emotional moment.  Then there is the sublime pleasure of watching Nicholas Christopher go from victim to lover to heartbroken shell as Tom Collins.  It is fun to watch his insecurity evolve into a strong, loving man, and devastating to watch him mourn.  Everyone in the audience can and should fall in love with this man.  And can he sing...  "Santa Fe"... "I'll Cover You"... brilliant moments of RENT at its best.  Finally, there is the amazing performance of Adam Chanler-Berat, who bears an uncanny and disturbing resemblance to Jonathan Larson.  As Mark, he embodies the troubled observer who avoids his own life by filming everyone else's, by giving an appropriately passive-aggressive performance.  His finest moments include "Tango Maureen," "La Vie Boheme," and "What You Own."  In all three instances, he elevates the cast members he is with into giving performances worthy of him and the rest of the show.  And he is the only cast member that seems to have let the show be part of his essence, rather than just acting like he is in a production of RENT.

I guess that sums up this "revisal."  What is good is great - genuine and honest.  But most of it is an artificial act.  Where the original felt like it was actually happening, the revival feels like it is being performed.  At first, I felt almost bad for being so in love with the original, that maybe I couldn't be fair to this version.  But then I realized if they didn't want to invite the inevitable comparisons, they wouldn't have tried again so soon.

Rate this blog below, and leave your comments here, by email at jkstheatrescene@yahoo.com, or Tweet me!
Jeff
2.349