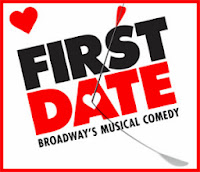 Of the two new musicals that opened over the summer, only First Date is still plugging along.  Although it is pretty steady at the box office, one wonders how much longer this little charmer (review HERE) will be around, as the bigger, splashier shows start opening.  I thought I'd take this time to see what they are doing to try and lure audience members, on TV at least.  And I found two commercials to evaluate.  I don't live in New York or the surrounding area, so I'm not sure which (or both) of these is being shown there.


This ad finds a great balance between the typical Broadway musical commercial and utilizing the show's greatest assets, its leads, Zachary Levi and Krysta Rodriguez.  There is the tried and true fast cut of scenes, revealing a charming character-driven show: lots of close-ups on the cast acting silly, and quite a bit of action, letting us know that, despite a single set, there's plenty of song, dance, movement and laughs.  And there is the expected voice-over, reading the critical quotes.  Cut into this brisk 31 seconds is a "reality" check of Levi and Rodriguez at a restaurant - just like in the show - telling us how fun this show is to be in, and ending with an out of place joke, which is exactly how the show goes.  You get what you expect, and them something fun and and unexpected happens.  The only drawback, kind of, is that it ends with the pair onstage kissing.  This gives away the ending, but I can understand that the producers want to draw in all the folks who dream of romance and a kiss from cutie pie Levi.  And I'm sure there are more than a few out there that wouldn't mind a lip lock from Ms. Rodriguez, either!

This spot, like the other, offers both the typical Broadway musical ad and highlights a unique aspect of this particular show.  Long a staple of such ads, this one combines critical quotes with man on the street testimonials lavishing praise on the show they just saw.  What is interesting, and somewhat unusual, is that some of these testimonials are from men!  Smartly, the producers have included guys in the praise, showing tat this will appeal to both partners on date night.  And it is true from my experience - the day I saw it, the men were having as good a time as all the matinee ladies.  But this ad also wisely (and perhaps to appeal again to men) emphasizes two unique qualities of this particular show: it is short and there is a great after show street party where you can get pics and autographs with the stars.  We know it is short from the time stamp in the corner, and someone mentions that it is 90 minutes of fun.  And then the paparazzi film style shows the cast being silly for the camera while signing everything in sight and posing for photos with the adoring fans.  Clearly, First Date is as fun after as it is during!  The icing on the cake is the final image - the show logo with ticket info, emphasizing that tickets can be had for as little as $35 each.  Smart all the way around, if you ask me.