Logos: Twelfe Night, or What You Will and The Tragedie of King Richard III 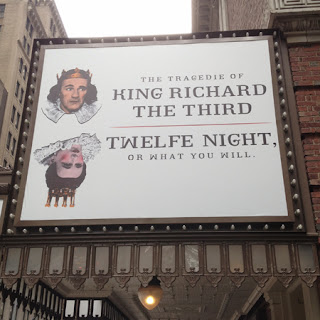 In a season unusually crowded with large scale, commercially visible productions of Shakespeare plays, you really have to stick out to be noticed, I'd think.  And, while I know some of you think a dissection of a show's logo might be digging into the minutiae, the way producers are selling these shows could make a difference in gaining the theatre-goer's limited dollars.  It is difficult enough to get bottoms in the seats of plays in general (versus musicals), and one imagines that an audience for multiple Shakespearean productions would be even more difficult.  So selling the show will probably be even more key to turning a profit than good reviews and star power alone.

Two of the four Shakespearean plays currently on Broadway are Twelfe Night, or What You Will and The Tragedie of King Richard III, and I think the producers have really done pretty much they can to get people to buy what they are selling.  And their product has a top notch pedigree - in import from London, performed by a notable Shakespearean troupe, led by an acclaimed stage actor (which is rare all by itself these days - "a stage actor!")  Adding to it all is the presentation of these shows: one comedy, one tragedy, presented in repertory and done as traditionally as possible, with an all-male cast.  Most all of that figures into the logo for this show.

The title itself signals that there will be a traditional approach to the show.  Both titles, popular, but not over-produced, stand out by using their Elizabethan spelling.  No Twelfth Night and Richard III  here.  The "misspelling" is eye catching, and using the whole titles make you stop and read the whole thing.  And there is the font, which looks like those handbills that the Globe Theatre's shills used to pass out on the streets of London.  I also love how they start the whole thing with "Mr. William Shakespeares" (no apostrophe making it all the more rustic). 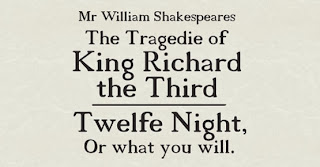 And what better way to show off the repertory aspect of the show AND the star at the same time, by showing old-style photos of Mark Rylance and BOTH Richard III and Olivia.  Even if you don't know who Rylance is, you can tell that it is the same person in both pictures.  And then it hits you: a man is dressed like a woman!  Drag show?  No.  But traditional Shakespeare, for sure.  And he looks so distraught as Richard III, highlighting the tragedy; a man dressed as a supercilious looking queen - royal, not drag - is funny all by itself, highlighting the comedy.  And, finally, on the marquee version, I love how the picture of Olivia is upside down, suggesting that if you just flip the sign over, you'll know which show is on that day.  Again, it is funny, too (in a knowing chuckle kind of way); Richard III upside down would be a poor choice.