In the time honored tradition of Jesus Christ Superstar, Evita, and as it turns out, Tommy and American Idiot, comes a new rock musical tryout via the "concept album."  This time around, theater writer newbies Steven Cheslik-de Meyer (music and lyrics), Alan Stevens Hewitt (music and additional lyrics), and Tim Mauer (book, lyrics and additional music) have created an anachronistic punk/hard rock piece surrounding the American legend of Lizzie Borden, Lizzie.  Set in 1892 and detailing the actual events surrounding the notorious ax-wielding young woman, at the time considered by many (including The New York Times believe it or not) to be a heroine, not a cold-blooded murderer, this piece tells her story through songs written to be edgy punk rock, with the occasional pop ballad.  Not as organically punk rock as American Idiot, this new work certainly benefits from its ancestry.  Lizzie no doubt owes its commercial future to such shows as Idiot and Spring Awakening, if for no other reason than those shows (along with RENT) have laid the groundwork for such fare to be acceptable to musical theatre audiences.

Happily, despite its debt to its predecessors, Lizzie doesn't suffer from being derivative.  No, it is its own animal, a dark study of family politics gone bad, and more particularly of the dark psychology of a young woman driven over the edge.  But the music - infinitely catchy and moment-to-moment specific - and the lyrics - alternately clever and revealing and seriously comic - are only part of what makes this concept album a must-add to any cast album collector. It is also the presentation of the story that makes this a unique adventure. 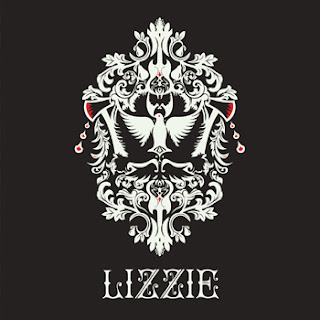 
At least for the recording, all of the songs are sung by four females: Lizzie herself (Carrie Manolakos), the Borden's maid Bridget (Carrie Cimma), Lizzie's sister, Emma (Storm Large), and Lizzie's friend, Alice (Ryah Nixon).  With enough dialogue included to make the whole piece (mostly) cohesive, the songs do the work of advancing the plot, revealing character, and subversively, delving into some complicated themes/motives of a killer.  In this hyper-legend version of the true story, Lizzie and Emma are victims of familial politics, including all sorts of abuse.  Lizzie, the modern thinker has had enough, while Emma tries valiantly to carry on as a lady should in Victorian times.  As an observer of all sides of this situation, Bridget offers (as the liner notes suggest) a sort of angel/devil conscience, and Alice has deeply personal reasons for trying to help Lizzie get away with murder, after her potentially life-saving advice goes unheeded. 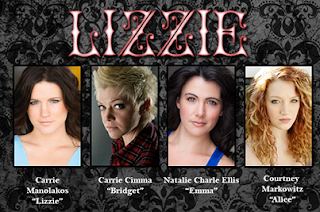 All four vocalists are in superb form, singing and acting the piece with the clarity and understanding  generally reserved of actors who have done the show.  Similarly, the band, orchestrated by Hewitt, is also excellent.  I will say here that when I read that this was a hard rock-punk rock work, I was initially dubious - I don't care for that kind of music generally.  But I figured that if I could come to love Tommy and American Idiot, I should at least give it a try.  And I can say I was completely hooked by track three.  Why?  Because in putting the words, concept and music style all together, it is immediately clear that one, the juxtaposition of rock and 19th century story works as well here as it does with Spring Awakening, and two, because these savvy writers have managed to stay true to their vision while being thrillingly theatrical.

There really isn't a dud on the entire two-disc set, several songs in each act really stick out to me as significant and winning.  Each act starts with a catchy, clever scene-setting ballad (think Sweeney Todd) called "The House of Borden" in Act One, and "The Fall of the House of Borden" in Act Two.  The former sets up the circumstances which lead to those infamous "40 whacks," while the latter sets up the consequences of said whacks. The stirring ballad (in the more traditional sense) "If You Knew," reveals much about the feelings Lizzie's best friend feels for her, while a follow up number, "Will You Stay?" cements that relationship.  Both numbers are lovely and are superlative examples of the poetic nature of the lyrics.  The combination of the final two numbers of Act One, "Mercury Rising" and "Somebody Will Do Something" create an exciting, action-packed and emotional climax.  Listening to them, all I could think was how exciting it would be to see this actually staged.


The Act Two disc is equally packed with treats, including "Burn the Old Thing Up," a song all about getting rid of evidence.  Then there is the infinitely catchy, truly theatrical number "Questions Questions" made up entirely of questions.  More on the pop music side is "Will You Lie?"  The gospel-tinged "Watchmen for the Morning" is a song I put on repeat three times, and the RENT/American Idiot-ish "13 Days in Taunton" is equally impressive in a "showy"way.  The second reprise of the song "Maybe Someday" explains why the authors felt this otherwise unremarkable number earns three spots in the score.  Interestingly, the song "What the F*ck Lizzie?" is the one most stylistically close to the rock genre the writers are enamored with, is, for me, the least successful.  It smacks of trying too hard to be "cool and edgy."  It isn't exactly the swearing, as much as it is that these profanity-laced lyrics aren't quite as good as the rest.

My only other real issue with this otherwise amazing effort is that the liner notes (by Kent Nicholson, of Playwrights Horizons) are long on trying to be clever and short on explanation.  A plot synopsis - even a brief one - would go a long way towards making some of the lyrics seem so blatantly explanatory.  I am sure I'd have noticed them less had I known more of the plot specifics.  Even still, the whole is as great as the parts here.


Lizzie has had several developmental workshops and regional productions (including one in Houston that started yesterday), and one can't help but assume that this concept recording is another step toward a New York run.  Let's hope that this goes the route of Superstar, Evita and Jekyll and Hyde in that they have gone on to significant lives.  Lizzie is totally worth your time and money.  I know it'll be on my  CD player for the foreseeable future.