CD Review: Laura Benanti Live at 54 Below: In Constant Search...

Ever since I first saw Laura Benanti in the revival of Into the Woods, I've been smitten.  Not in any kind of dirty way, but in the I-think-she'd-be-an-awesome-little-sister-slash-friend.  I mean, sure she's pretty, but in that cool, girl-next-door kinda way.  And in everything I've seen her in - on stage or TV - her innate sense of humor shines through.  I bet she's a blast at a party.  Of course, there is her talent.  She is equally at home with comedy and drama, plays and musicals.  And I love her voice - the range, the ease, the belt, the "chest voice," the "head voice."  All of it. The whole package.  Unfortunately, I missed her solo show at 54 Below.  Fortunately, Broadway Records continues its preservation of these concerts for all of us who love Broadway.  And I am thrilled to report that Laura Benanti Live at 54 Below: In Constant Search of the Right Kind of Attention only solidifies my admiration of the Tony winning star. 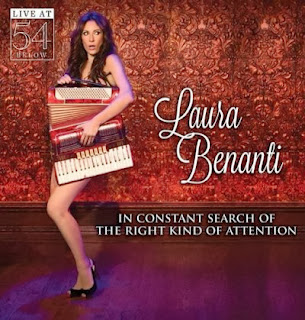 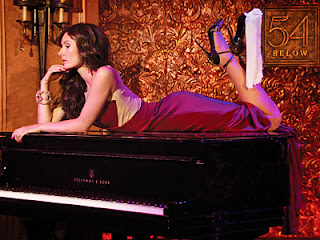 THE TOP 3 REASONS YOU NEED TO BUY THIS RECORDING

3.  The quality of the sound: Kudos to Aaron Ankrum and Greg Reierson who oversaw the mixing and mastering of this live recording, who made this the perfect balance between live sound and full sound.  The songs sound as clear and layered as studio recordings, and the live patter and interplay between artist and audience sounds like you are actually there.  Honestly, this kind of quality is usually reserved for big concert rock bands.  How awesome that Broadway records takes these recording that seriously.

2. The sense of humor of the whole thing: From Nathan Johnson's sweet and very funny photos of La Benanti to her own equally amusing liner notes (even her "thank yous" are chuckle-worthy), you get the sense of fun and appreciation of life Laura has.  And that carries over in her show patter - just a smidge too perfectly timed to be entirely convincing as "spontaneous" - which is witty and charming, especially when she giggles right along with us.  You'll love the bit with the occupation of a certain audience member, and I had to smile at the memory she shares of singing in the stairwell of her apartment building, and its effect on the residents after she became a Broadway star.  Plus, there's a blink and you'll miss it contribution from one of her frequent stage collaborators.  And then there are the songs...

1.  The set list: Eclectic is the word I'd use here.  Sure, there are a couple of obligatory show tunes, including a nifty rendition of "On the Street Where You Live," "Unusual Way" from Nine, and what has become her signature song, "Model Behavior," from Women on the Verge.  Also on the show tune front are two numbers from two new musicals by Todd Almond (also the musical director here).  Both show a lot of promise, with elements of Guettel, La Chuisa and Pasek and Paul in the music and the lyrics.  Almond's is a unique and derivative one at the same time - I suspect we'll hear a lot about him.  Ms. Benanti does both songs justice, not just as a singer, but as an actress, no small accomplishment on an audio recording.  Of the two "Tilly's Aria" makes me look forward to hearing an entire score for that show.  She also includes some Joni Mitchell and Harry Chapin for good measure.  And two of her own songs: the crazy "Ukulele Song,' and the charming "New Mexico."  Like I said, eclectic. 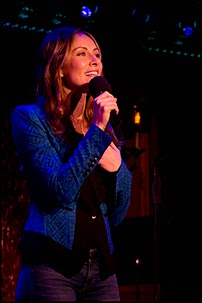 IF I WERE ONLY GOING TO BUY 3 SONGS FROM THIS ALBUM ON ITUNES...

Laura, if you read this... I think you'd be the coolest little sister!  Thanks for a great album!