It is rare that a production really lives up to all of its hype.  It is rarer still that a production exceeds that hype - those are the shows that become legend, talked about for years later.  The current revival of Tennessee Williams' The Glass Menagerie is one of those rarer productions.  Long one of my personal favorites, this true American masterpiece comes to vibrant life under the pristine direction of John Tiffany, not so much a re-envisioning as a laser-like sharpening of the playwright's original vision.  Stripped of much of the physicality of previous productions, the ethereal quality of memory pervades every aspect of the performance, even as the characters and themes become crystal clear.  A perfect combination of text, design, direction and acting makes this not-to be-missed revival a true revelation.

Upon entering the Booth Theatre, it is immediately apparent that this will not be your "typical" Menagerie. The fact that Williams called this a "memory play" is germane to this entire production and is evident in every aspect of it.  True, there are some aspects of Bob Crowley's stunning set that signal that we are in fact seeing the classic play - the prominent fire escape, the living room and dining room of a small apartment, a glass unicorn on display.  But, more tellingly, it is what is not there that is remarkable - no portraits of an absent father, not piles of family clutter of bygone eras gathering so much dust, no ornate place settings... no glass menagerie.  Just the lone unicorn, fragile in its singularity, yet strong in its individuality.  In place of actual walls and rooms, the Wingfield apartment seems to be suspended over a black abyss that completely surrounds it, a collection of platforms representing a whole space, with exits that allow the family to appear and disappear at will, making them visible only when their presence makes a memory clearer. 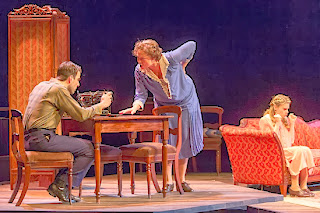 There are very few props, only those specifically attached to specific moments in time; other props are pantomimed.  Take the ritual of setting the table for years of family meals, for example.  Instead of cluttering the moment (and the stage) with plates and cutlery, Tiffany has the mother and daughter set and rest the table with a ritualistic series of movements - the memory of the ritual is acknowledged, but the details are left out; that mother and daughter did this mundane family task with such regularity is what the mind recalls, not the food of a specific meal or the place settings it is eaten off of.  (Movement by Steven Hoggett) Similarly, and more importantly perhaps, the props that do exist are the ones that are attached to specific events, like the glass unicorn, the single piece of the daughter's glass collection that figures most prominently in a major event in her life.  The same can be said for the very specific costumes (also designed by Crowley) which only change for specific events - the mother  and daughter dressing for the gentleman caller, for example. In short, director and designer have collaborated to create a physical representation of how the mind remembers turning points in our lives. 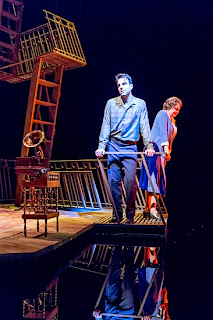 Then there is the rest of the stage area, a deep inky blackness around the apartment, a reflecting pool below.  Often throughout the production, as characters come to crisis points or poignant, life-changing moments, the actors come right to the edge of the platforms, teetering in the brink of falling in; still other times, they bend right down and peer over the edge staring at their reflections.  It is these moments that bring out the psychology of the piece, letting us all even deeper into those most private of human experiences of self-reflection and selective memory portrayed in the play.  This version allows its audience to connect with the characters on a much more intimate level.

I think it is this more direct connection to the characters that makes this production so thrilling.  It shows how the work is both timeless and timely.  It helps, of course that all four roles are filled by actors so in tune with their roles and with each other that you can see a family spinning individually out of control, while being a completely in sync unit.  And really, whose family isn't just like that?

As Jim, the gentleman caller, Brian J. Smith is ideal - he is boy-next-door handsome, with charisma to spare and an easy honesty that instantly draws all around to him without reservation.  His bright smile and understanding delivery reveals a young man who understands instantly why he's been brought into this home.  Smith plays it ego-free, making it totally believable that even as he must reject the reason he is there, he must do so without hurting his intended.  Whether the reason for his rejection is true or not isn't what is relevant here, and Smith smartly plays that ambiguity so we can decide for ourselves. 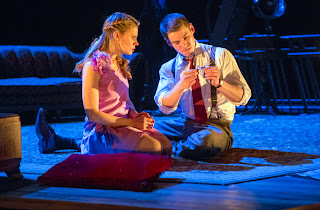 The lovely, and for this production, remarkably fragile Celia Keenan-Bolger plays the wounded Laura with more than the usual wide-eyed look most actresses take with this role.  She only hints at the physical disfigurement with a small limp and turned in foot.  She only hints at her mental limitations with slower, deliberate speech.  Instead, she rounds out this young woman with modulation in her delivery, allowing the emotion of the moment to carry her away, before going back to looking down and making herself as small as possible.  Keenan-Bolger creates a Laura that you can relate to and root for - you wince at her awkwardness and revel in her surprising strength, but you never really pity her.  And that makes a huge difference. 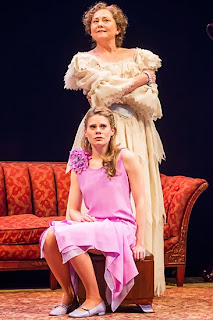 I've seen some real heavy-hitters play matriarch Amanda Wingfield, including Jessica Tandy and Julie Harris.  Both played the faded Southern belle/Scarlet O'Hara strong to the hilt.  But in the hands of the brilliant Cherry Jones, this Amanda is a frantic mother clinging to a past that is gone forever, while desperately trying to protect her family from a  future none of them are really prepared for.  This woman is an infuriating bulldozer, manipulating, cajoling and controlling  her children into submission.  Jones makes this woman also somewhat sympathetic as you realize that she desperately needs her children to take care of and be taken care of. Time is slipping away, and the desperation she feels takes over every aspect of her life.  Ms. Jones is utter perfection.

The biggest revelation of this production, for me at least, is Zachary Quinto as Tom, the older brother, narrator of the piece and stand-in for the playwright.  Quinto has amazing presence - anyone who can hold their own against Jones has to - making this version of Tom a force to be reckoned with.  A seething mass of discontent underneath, it is interesting to watch the actor navigate the tricky balance of showing us that anger while still maintaining a sense of respectful decorum in front of his family. But it watching him evolve into a real fighter against his mother's tyranny while doing what he can to save his sister is absolutely thrilling.  Quinto's innate grace and broad gestures also hint at a variety of secrets Tom harbors; you just know he doesn't go to the movies every time he storms out.  And it is just as easy to believe that there is more - on Tom's part at least - to the relationship he has with his one friend at work, Jim.  Does he pick Jim as the ideal suitor for Laura or because he'd pick him for himself were times different? 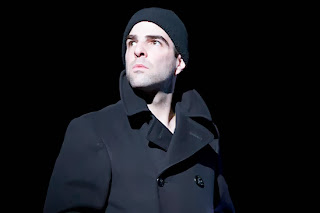 When the play was new, the setting was "now and in the past." While this brilliant interpretation of this brilliant play is definitely of its time - gentleman callers, future spinsters sent to business college, matriarchs being tended to by their children, and the tough economics of abandonment that lead a mother to a small walk up apartment - and as current as today - strong women, gay men forging a life for themselves, even if it means estrangement from his own flesh and blood.   Then, such ideas, even if they were autobiographical, could only be in the subtext.  Modern sensibility, an actor brave enough to explore it, and a director smart enough to make it all come out, make this Glass Menagerie one for the 21st century.  Now and in the past, indeed.