Every year, on the afternoon of the Broadway Flea Market and Grand Auction, Mike, a friend ours and I attend a Broadway show.  Usually, it is to return to a favorite or to catch up on a missed show.  This year, it was a return for Mike and I, and a catch up for our friend.  We had no idea that that performance would also be the last for Tony winner Andrea Martin when we purchased the tickets, but tat was just an added bonus.  As it turns out, for the most part, Mike and I agreed that Pippin was even better the second time, and our friend, an avid Cinderella fan readily admitted that this really deserved the Best Revival Tony Award.

When I first saw the show, I was very close in the front orchestra; this time around I was in the center front mezzanine, affording me a straight on, more panoramic view.  While I loved the up close view of the costumes and the eye-contact with the cast throughout the show, seeing it from upstairs allowed me to see the full scope and grandeur of Paulus/Snyder/Walker' staging/circus tricks/choreography.  WOW!  I'm sure I still didn't catch everything, but seeing those stunts and dance numbers from that vantage point was mesmerizing.  I'm not sure I blinked, and I am sure I held my breath for nearly the entire running time. 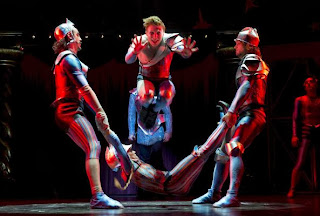 The ensemble, including a few original cast replacements, remains top notch.  Preston Jamieson, on for an ailing Orion Griffiths is very funny in his bit parts (and is appropriately sexy, too).  With Griffiths out, the second act balancing stunt has been replaced with a new, two person stunt.  It isn't quite as breath taking, but the replacement is still pretty amazing - and one of the favorites of our companion that hadn't see the show before.  And Gabrielle McClinton, who has replaced Stephanie Pope, is a terrific dancer (and is appropriately sexy, too).  Luke Kolbe Mannikus, so charming in Priscilla, is a winner here, too, making an adorable Theo.

This time around, I found the "With You" sex sequence to be a revelation - the vantage point allowed me to see it much more detail - particularly the roles in it played by Patina Miller and Erik Altemus.  Speaking of them, both have really grown in their roles - Miller is even more sinister and sexy, and Altemus continues to be an intriguing presence throughout.  I found myself watching what he was doing even in the background.  Rachel Bay Jones is even more marvelous as Catherine, easily getting laughs and effortlessly charming Pippin, and us, with her riveting performance.  I repeat my dismay that she was overlooked by the Tony committee.  And Matthew James Thomas is... sweet, sexy and charming.  I have to say that this time around I found myself hanging on his every word, pause and movement during the entire finale sequence.  He was, no pun intended, ON FIRE. 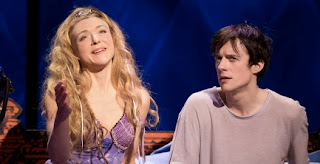 Christopher Sieber, as Charles during Terrence Mann's vacation, is a funnier version, going for the broader laughs.  It is a fun, valid interpretation, and he sings very well - "War is a Science" is crystal clear and booming.  I don't feel "ripped off,"still, I missed the undertone of gravitas that Mann's gruff take on the role included.  Sabrina Harper is an excellent understudy, dancing the role of Fastrada just as well as Charlotte d'Amboise. 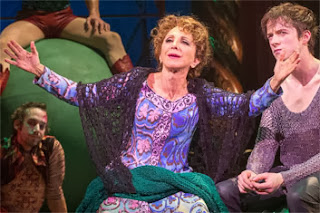 The "big deal" of this particular performance, of course, was the final turn of Andrea Martin.  With everyone in the room aware of the occasion, she not only got a screaming ovation during her entrance in "Magic To Do," most of the audience rose to their feet following her circus act.  The words of "No Time At All" took on added weight, and it was wonderful to see her cast mates smiling through tears as she worked through her big scene.  Thomas appeared to be the most moved, wiping away tears for the remainder of the scene.  I expected there to be some whoop-la at the curtain call, but there was none (save for some hearty cast applause at her curtain call), and in keeping with her class act ways, Martin took nothing away from the rest of the company as they bowed.  Business as usual marked her last show; it was a classy way to end a first class, they'll-be-talking-about-it-for-years star turn.  It was another of those moments I'll cherish as a theatre-goer.  I'm so glad I was there to see it.

Cast changes and circus act modifications have not hurt the show a bit.  And I expect, as the run continues, the show will continue to evolve.  as it stands now, Pippin remains a spectacular and very emotional experience. I look forward to my next visit!

NOTE: This blog was scheduled to post on Monday, September 23rd, but due to posting issues with the blog program, it was delayed.  Sorry about that!

My original review is HERE.