CONTEST: WIN Tickets to The Cripple of Inishmaan

THIS CONTEST HAS ENDED.  THE WINNER HAS BEEN NOTIFIED.  A NEW CONTEST STARTS MARCH 11TH! THANKS FOR READING AND PLAYING!

Maybe you've seen one of the plays of Martin McDonagh - The Beauty Queen of Leenane, The Pillowman, or The Lieutenant of Inishmore.  Or maybe you are a fan of Daniel Radcliffe - his stage work has been terrific (Equus, How to Succeed...).  Either way (or both!), have I got a contest for you!  Enter this contest to win a pair of tickets to McDonagh's latest play to make it to Broadway, starring Radcliffe, The Cripple of Inishmaan!  This contest will end at Midnight on Sunday, March 9th. 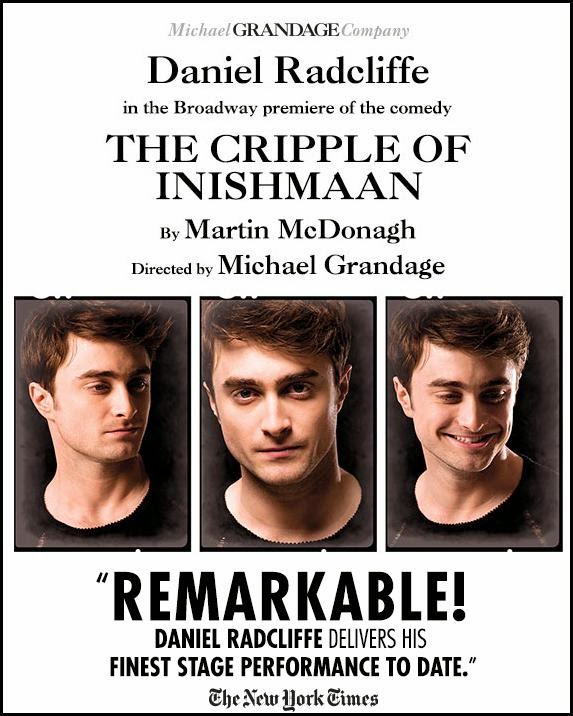 ABOUT THE PRODUCTION:
“Daniel Radcliffe delivers his finest performance to date. He is remarkable,” raves The New York Times.

Radcliffe, star of the eight Harry Potter films, makes a triumphant return to Broadway following his 10-month sold out run in How to Succeed in Business Without Really Trying in the Broadway premiere of Martin McDonagh's riotous comedy directed by Tony® award winner Michael Grandage.

Set on the remote island of Inishmaan off the west coast of Ireland, word arrives that a Hollywood film is being made on the neighboring island of Inishmore. The one person who wants to be in the film more than anybody is young Cripple Billy (Radcliffe), if only to break away from the bitter tedium of his daily life. McDonagh’s comic masterpiece examines an ordinary coming-of-age in extraordinary circumstances and confirms his position as one of the most original Irish voices to emerge in the second half of the twentieth century.

"5 Stars! A stupendous performance by Daniel Radcliffe. The finest piece of acting I have seen all year.” - Tim Walker, The Sunday Telegraph
“The most politically incorrect play in the West End – and probably the funniest.” - Robert Gore-Langton, The Mail on Sunday


THE CONTEST
1.  TRUE or FALSE: Daniel Radcliffe is a Tony nominee for his work in How to Succeed...
A. TRUE
B. FALSE
2.  Director Michael Grandage won a Tony Award for his direction of:
A. Evita
B. Frost/Nixon
C. Mary Stuart
D. Red

3.  All of the following plays by Martin McDonagh were nominated for the Best Play Tony EXCEPT:
A. The Beauty Queen of Leenane
B. A Behanding in Spokane
C. The Lonesome West
D. The Lieutenant of Inishmore

MORE ABOUT THE SHOW: ONLINE and SOCIAL NETWORKS