Big Fish the Original Cast Recording is pretty much like Big Fish the musical.  And that's not necessarily a good thing.  At least everyone involved can be proud of their consistency.  But it says a lot about both the recording and the show itself, that the very best song on the CD is the Bonus Track, "The River Between Us," a song cut from the show before opening night.  It is pretty much the only song that even comes close to real depth, nuance or even plain old variety. 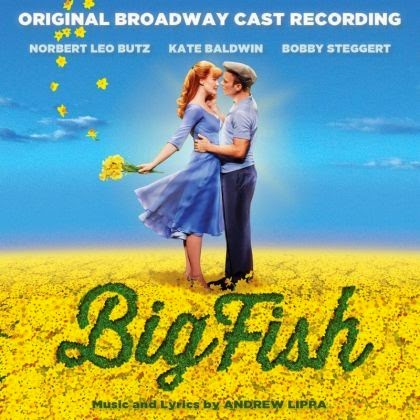 First, let me again compliment Broadway Records on their continued commitment to preserving contemporary Broadway musicals that aren't necessarily guaranteed big sellers.  Clearly, this company recognizes the long-term value of doing so. And whether the show was a hit or a miss, they give every show they record the full-on star treatment.  The booklet is a real souvenir of the show - the presentation is more program than CD book. And the quality of the recording is superb.

There is no doubt that Andrew Lippa can write a big, show-stopping "Broadway" number.  The problem is that, in this case, it seems that he can write only big production numbers.  Because even when he slows it down it seems totally overblown.  This so much the case, that - I kid you not - when I was playing the CD at my desk at work, when it finally got to a different paced song, my cubicle mate turned to me and said, "that was one lonnnng song!"  It was somewhere around track 5.  Seeing the show, it took a little longer for that sense of monotony to hit me, hidden by all the flash of staging and scenery.  And, as we found out from the show, too much of a good thing isn't good at all.  And sense of nuance, nostalgia and sincerity was washed away by all the flash.  This recording changes none of that.  In fact, there is one thing that this recording revealed to me that shocked me.

Even with all of my misgivings about the show (my review HERE), I was still pretty sure I was in that "Norbert Leo Butz will be Tony nominated.  He carried the show" camp.  Well, now, I'm not so sure.  I know this will make me unpopular with some of you, but he chews the scenery so hard that I almost expected him to come gnawing through the speakers.  He of all people, I thought, understood that being loud and over-the-top all of the time reads like white noise, not emphasis.  This was much less noticeable when seeing him perform live, perhaps because some of his bombast was smothered by the over-production around him.  Disappointing. 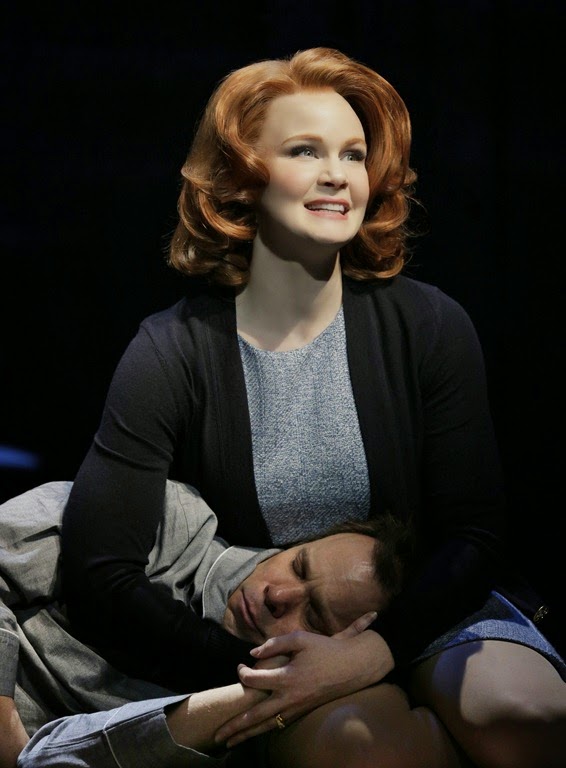 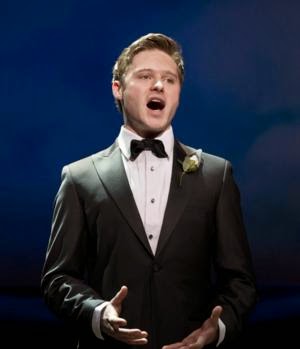 The best work is from Kate Baldwin and Bobby Steggert

I pray to the musical theater gods that Kate Baldwin will at last be attached to a project worthy of her considerable talents.  Big Fish ain't it.  And yet she still manages to rise above it all, turning in a lovely performance that is a wonderful counterpoint to all of the noise around her.  Perhaps, it will be her, not Butz, that the Tonys will recognize.  We shall see.  ("Daffodils" remains underwhelming.)  Another nice surprise is how nicely Bobby Steggert comes across here.  Not a small thing, when one considers that he is the antagonist, saddled with some of the more unpleasant material in the whole show.  But he acts the songs as well as he sings them.  And as I mentioned at the top, I'm grateful that the song "This River Between Us" was captured.  It includes Steggert's best work, and, believe it or not, Butz's best, too.  Would that he had showed some of this restraint a little more.

Fans of the show, I'm sure, will relish this recording.  I'm afraid this is one that will go on my shelf never to be heard from again.