How much you enjoy Rocky, ultimately, I think will depend upon where you sit, how important or not a varied, engaging score is to you, and what you think the film (and this stage adaptation) is really about.  But even if the show fails for you on all three of those counts, there are still plenty of things to admire about this ambitious, if flawed, new entry in the movies-to-musicals pantheon.  The technical elements, the staging and many of the performances are top notch.  And it is not hyperbole to say that the final scene is among the most breath-taking 20 minutes I've ever seen on a Broadway stage.

I was very fortunate to have sat in the Golden Circle seating area for the show, meaning I was fourth row, dead center, and onstage for the final sequence.  I'm not going to waste the time and effort to discuss potential seating issues for this show - read the message boards for that.  But I will say, that for me, seeing the show up close really made the show that much more enjoyable.  Sometimes distance does lend to the enchantment, and if I were to see this again, I'd like to see it from the mezzanine.  Being up close, though, allowed me to really enjoy what the story is really all about. And that is where your expectations might come into play.

If you go into this with the feeling that Rocky is about boxing - the training, the big championship bout, and all of the requisite action, you won't be disappointed.  The raw eggs, the Philadelphia staircase, and the punching of meat are all there just like in the movie.  And the final twenty minutes are all for you, too.  But the majority of the show is devoted to what both this musical and the film has always been about: the love story between two underdogs in the fight of their lives.  Really, both aspects of the show are very intimate.  Is there another sport where the opponents are so directly up close to one another?  My vantage point allowed me to see and feel the personal details of both aspects of the show.  So, sports fans, if you are willing to get just as into Rocky and Adrian as you are with Rocky and Apollo, this show is for you, too.

Musical theatre fans, on the other hand, might not feel as willing though, because, in truth, the score by Stephen Flaherty and Lynn Aherns, is definitely the weakest link in the show.  Perhaps their work, too, suffers from disappointment stemming from expectation.  This pair is superb at writing for period and genre - the tropical flavor of Once on this Island and the musical idioms of Ragtime were both spot on and gloriously rendered.  Maybe they just couldn't get a handle on the mid-seventies vibe (they really try in the pseudo-funk/disco number "Patriotic," though the number stops the show and not in the good way).  To be fair, they do have a handle on the low level education of our hero, who aptly, if not delicately, assesses his own state of mind in the extended metaphor of "My Nose Ain't Broken," and he's as sweet as can be when he's charming his girl on the ice rink with "The Flip Side."  And there are a few songs that are so good that I'll definitely buy the cast recording - "Happiness," the lovely duet for Rocky and Adrian that even hints at the Sondheim sound, and both of Adrian's major solos, the dark and poignant "Raining," and the empowerment ballad, "I'm Done." Thomas Meehan and Sylvester Stallone's book hues closely to the latter's screenplay, and works the songs in nicely enough that it is never jarring when someone opens their mouth and sings.  But still, it is the score that causes the show to drag, what with 95% of it being ballads.  (And "Eye of the Tiger," while a crowd-pleaser and understandably included, feels like a big cop out to me.) 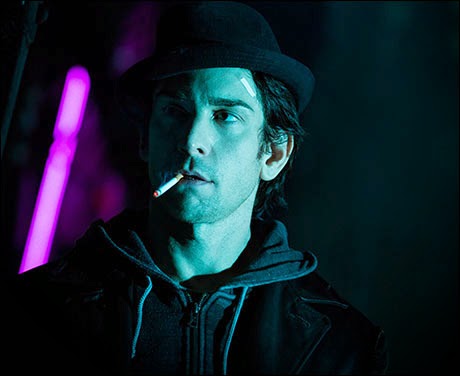 After what I just wrote, you have probably gleaned that, for me, the biggest and best takeaways are the star turns of Rocky (Andy Karl) and Adrian (Margo Seibert).  It is a lot to their credit, that they are able to impress above the din of the spectacle, the action, and the drab songs.  Most of that has to do with some amazing chemistry between them - you'd think they really did grow up together.  And a great deal of their power also comes from how they grow as characters interacting with the supporting cast and in moments alone on stage.  It is so wonderful to finally see Mr. Karl in a role that allows all of his immense talents to shine.  He definitely has the physicality for the role, and the zeal with which he attacks it makes his Rocky Balboa a force to be reckoned with and a guy to root for.  And a star is born in the truly amazing Ms. Seibert, who in one instant can break your heart and get the hell out of her way.  Watching her transform from wall flower to empowered woman is breath-taking in the detail and in the broader strokes for her thoroughly winning performance.  Yes, she has a great singing voice, but her acting skill puts her in the rare company of some of today's greatest musical theater actresses.  Remember Audra in Carousel?  Kelli in The Light in the Piazza?  I have a feeling that years from now, people will be remembering the breakthrough performance of Margo in Rocky.

The supporting cast does their job well enough.  Terence Archie is good in his few scenes as Apollo Creed, nailing the arrogance and, ultimately, the fear of meeting his unlikely match, in his character.  (I feel embarrassed for him for having to perform the truly awful "Patriotic.")  Danny Mastrogiorgio is terrific as the alcoholic and abusive Paulie, managing to make us both love his good side and hate his bad one.  Dakin Matthews' Mickey comes across as more a swarthy longshoreman that gruff gym owner/boxing trainer, but he acquits himself nicely when he is allowed to soften the character some in act two. And Jennifer Mudge does everything she can with a nothing part as Gloria, Adrian's boss/friend and Paulie's girl.  (Jenny Lee Stern is a riot as the drunken friend of the girls.)  The ensemble, particularly the men, has a lot to do, and I imagine 8 shows a week is exhausting what with all the running, boxing and costume changing they have to execute at each show.  I admire their work ethic for sure!

As I said, at its heart, Rocky is an intimate show.  So it might surprise you - it sure surprised me - that the giant spectacle that surrounds the intimacy works so well.  The lighting (by Christopher Akerlind) is a real thing of beauty, a master class in juxtaposing huge effects with the tiniest details of light and shadow.  The same can be said for the monolithic and simultaneously small sets designed by Christopher Barreco.  Who knew lower class dingy blacks and greys and inner city decay could be so magnificent?  Watching the set pieces evolve, revolve, rise and fall is as much a part of the experience of the show as the script and music.  Kudos, too, to the projections and video design of Don Scully, Pablo N. Molina and Jeremy Chernick, whose work really enhances the proceedings - and for knowing when enough is enough, and when to get out of the way.  (Weren't they available when Wonderland was coming in?)

I don't know much about boxing, but the choreography/movement by Steven Hoggett and Kelly Devine, sure was convincing to me.  It all looked real, even (especially) up close during the finale.  And so, I'd have to say that their work was effective.  In the more traditional dance area, the God-awful "Patriotic" is just as much their fault as anyone else's.  The real hero of this incarnation of Rocky, though is the brilliant Alex Timbers, who masterfully balances the intimate with the spectacular.  The whole thing moves with the finesse of a film, including the stage equivalent to huge broad shots and very tight close-ups, montages and slow motion thrills.  In the process, he has created glorious stage pictures that give me goosebumps even at the memory of them.  And I can't say it enough.  That final twenty minutes has set a new standard for the term "jaw-dropping."  Timbers has solidified his place as the go-to director of his generation.

It is so frustrating, though, that despite true master work from the directors, the designers and the leads, that what doesn't work in Rocky the musical drags it down so much.  Instead of the great (and elusive) rush that comes when you've seen a great musical, the show leaves you thrilled with the attempt...the sport...not the art.