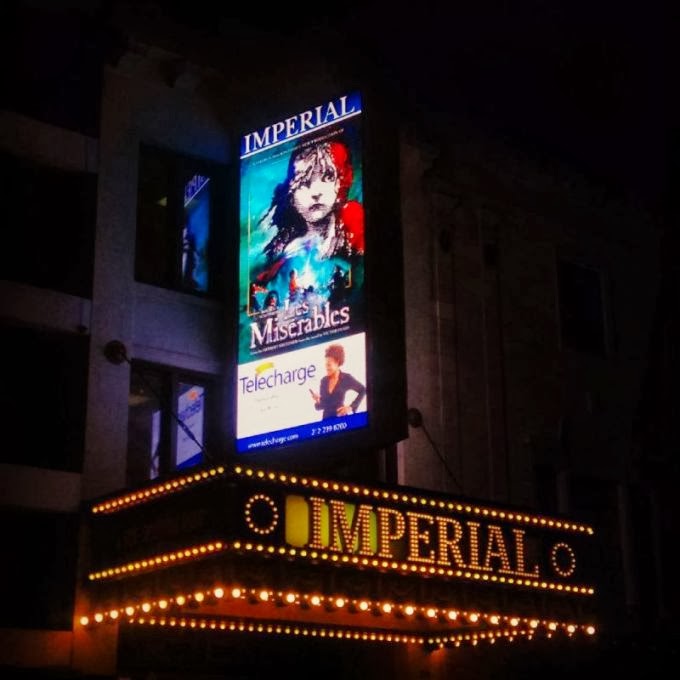 Previously, I blogged about the "re-imagined Phantom of the Opera" (HERE), without the onus of seeing that show anytime soon.  But the "re-imagined Les Miserables, " now in previews, is in my pretty-near future, so the stakes are somewhat higher for me.  There are several questions that I hope this revival will answer.  Some of you reading this may have already seen this new version, so the questions I am about to pose will be more than rhetorical for you.  Bear with me.

Will this new staging be different enough to make someone who is tired of the show interested in it again?  I am intrigued by the lack of turntable, certainly the original's signature staging element.  But will the new directors find a creative way to make epic tale flow?  I pray that it won't be a bunch of static scenes, with all of the solo numbers done full forward, standing center stage.

Will this new staging bring out some previously unrecognized revelations? Will we get a little more from the too-good-to-be-true Valjean?  Will we get to see some of the deeper inner-conflicts that eat at Javert?  Is there anything new to be mined from the Valjean-Javert relationship?  How about some of Hugo's themes getting more support?

Will this new staging incorporate changes brought about by the film version? God, I hope not.  The Thenardiers have already morphed into grotesque parodies of themselves.  If they maim animals  or sexualize Santain this version, I will be walking out.  And no new song, either. Please.

Will the new design elements make the new staging more interesting? Will they simply put everything on trucks that move around tracks on the stage?  Will they rely too heavily on projections?  I understand they are using Victor Hugo-era paintings as scenery, and I find that idea appealing, provided they don't go too far with it. Will they do something unique and new with the lights?
. How much will this new staging stay true to the original production, perhaps to appease "the fans"? Judging from some of the pictures from the tour that has preceded the Broadway revival, it looks like die-hard fans will recognize some iconic moments... the red flag waving, the One Day More wedge... most of the costumes...

Just how impressive are the much-touted new orchestrations? I will admit that I am looking forward to hearing what they've done to the score.  I hope they use lots of real instruments and not too much synthesizer.  The sound needs to be huge, striking and organic.

Was the casting of Broadway names in the principal roles worth it? Individual feelings about the Broadway stars aside, I have always felt that this show is best when performed by the very best actor-singers.  All the times I have seen this, I have been most impressed by those performers I've never heard of before, or people I have heard of doing something extraordinary and previously unheard of before with their roles.  We shall see!

Finally, is anyone else as amused/annoyed by the ridiculousness of the ads for this revival that tell us that "at long last, the phenomenon is coming home!"?  Talk about hyperbole!  "At long last"?  It has been barely 6 years since the last revival closed, and that one started only 3 and a half years after the original closed following a sixteen year run.  And if the "coming home" refers to it being at the Imperial Theatre as the website suggests, PLEASE!  Evidently, the powers that be have never sat in the rear mezzanine there - a mile from the stage and cramped.  Real homey...  (I'll let you know... that's exactly where I am sitting, since that is really all I could afford/was willing to pay to see this yet again.)  The "real" home, if there is one here, would be the Broadway Theatre