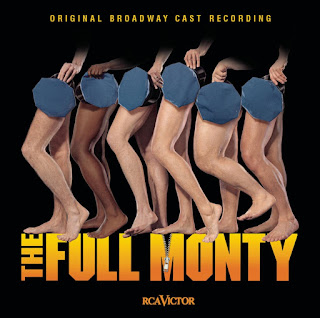 From the zippy, jazzy and unrelated overture to the catchy "Let It Go" finale, David Yazbek's freshman Broadway score for The Full Monty is fun and funny from start to finish. The show itself is one of my favorites, and the score is a large part of why. It had a healthy run starting back in the fall of 2000, but was overshadowed by the juggernaut that was Mel Brook's The Producers. That show was more a triumph of casting over real quality (as evidenced by the steep drop in sales following the departure of its principle cast), and this smaller, but, IMHO, funnier show full of heart got lost in the shuffle. Still, a 700+ performance run is respectable. It all reminds me of Hamilton and Waitress.

This score is full of what are now Yazbek standards - the risque/down-right-dirty lyrics, the pefectly built-in jokes. It actually resembles his most recent effort, though Monty is full of the one thing that Tootsie is largely missing. Heart. Of course, that heart is shown with a lot of humor - it is a musical comedy - but also with a good bit of honesty. These songs sound like the characters singing them; the voice is clear. And the love these people have for each other, spouses, fathers/sons, ex-wives... new found lovers, also comes across simply by listening to this cast recording. This made me fall in love with Yazbek's work. Well, most of it, anyway.

Highlights include the opening number, "Scrap," which is the perfect metaphor for how these steel workers feel about themselves, the act one closer, "Michael Jordan's Ball," where you can hear the moment these guys get their acts together. Then there's the men-are-pigs ode to self-pity, "Man," which offers Wilson and Conlee a chance to show off their comic buddy vibe. And De Shields is comic gold in "Big Black Man." And the women get their chance to keep things balanced - "It's a Woman's World" lets us men in on what goes on when the ladies go to the powder room in groups. And the vocal fireworks of Skinner's "Life with Harold" makes me love her even more.

Remember how I said there was plenty of heart? Well it pervades most every song, but there are a few songs that are bursting with it, and they are lovely to boot: "You Rule My World" (and its reprise) are all about marital support, and both "Breeze Off the River" and "You Walk With Me" bring tears to my eyes.

But mostly, this cast recording is an hour of catchy show tunes, belly laughs and awesome word play. If it isn't already a part of your collection, I highly recommend you add it.