DVD REVIEW: Were the World Mine

DVD: Were the World Mine. US Premiere, March 2008. Written by Tom Gustafson and Cory James Krueckeberg. Inspired by William Shakespeare's A Midsummer Night's Dream and the short film, Fairies. Directed for film by Tom Gustafson. A SPEAKproductions Film in Association with The Group Entertainment and Logo. 95 minutes. 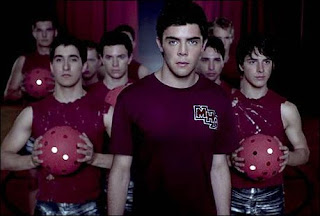 Were the World Mine is that rare film that tries to be all things to all interested parties, and succeeds on every level. This movie manages to be a small independent film, and edgy commercial film, a high school musical, an anti-High School Musical musical, a teen film, and adult (as in "grown up") film, a gay fantasy film and a gay-themed, serious film. It is funny, fanciful, sweet, romantic, thought-provoking and just a little risque. 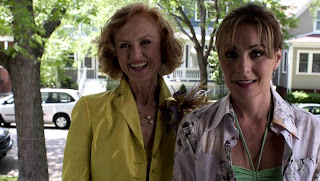 There are also several reasons why a review of this film qualifies for inclusion on a theatre website: it is about a high school drama club production of A Midsummer Night's Dream, and features large chunks of the Bard's work, both in progress and in performance. It is also a musical, though a somewhat unconventional one, with many Roxie/Chicago-fantasy-style numbers that easily move us in and out of "reality." Finally, it also includes several very fine actors, many of whom are no stranger to the stage, be it in New York, Chicago or L.A., though the most recognizable face to Broadway lovers might be that of Judy McLane, who has been starring in Mamma Mia! on Broadway as Tanya for the long haul. You might also recognize Wendy Robie and Jill Larson from both stage and TV screen. 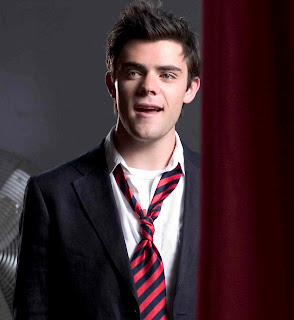 But if there is any justice left in the world, you will someday recognize Tanner Cohen and Nathaniel David Becker as the stars they deserve to be. Cohen plays the lead character, Timothy, while Becker plays Jonathan, the object of Timothy's affection. Both give fantastic performances, both in acting and in the musical elements of the show. Mr. Cohen in particular gives an angst-filled, edgy performance that is never over the top or annoying, but rather nuanced and full of detail, as his character vacillates between the happiness of his fantasy life and the lonely misery of his reality. An openly gay teen in an all boys' private prep school, he faces scrutiny and relentless teasing from his rugby team classmates and even one of his teachers. 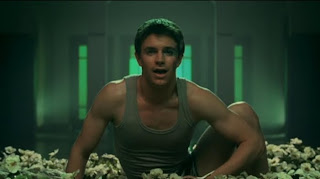 But as the Senior spring play, A Midsummer Night's Dream, comes closer, those two worlds collide as all of the boys are required to participate in the play. Through it all, only one other boy, the strikingly handsome Jonathan, seems to understand Timothy, protecting him and offering him private moments of solace and comfort. Mr. Becker brings this relatively complicated high school jock stereotype/anti-stereotype to full life; his inner conflict is displayed through some fine line readings and heartfelt facial expressions, all carefully picked up on film by director/writer Tom Gustafson, whose heart and soul is clearly driving this picture. 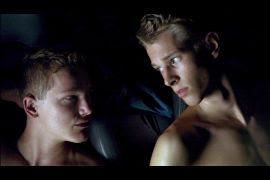 In the course of rehearsing the play, Timothy discovers a magic potion recipe that delivers the fanciful spell in Shakespeare's play: drops of the elixir in the eyes of all makes each fall in love with whomever he sees first. Hoping to woo Jonathan, Timothy makes the potion, but things get out of control when first he mistakenly sprinkles some on his straight best friend Max(a funny Ricky Goldman), and get even worse, when out of spite, he gives the potion to many of the people in the uptight small town he so desperately wants out of. The result? Most of the town begins to see the world from a gay perspective, as couple after couple (same-sex, of course) pursue each other and fall desperately in love. As one might expect, the homophobic coach (Christian Stolte) and the most offensive of his rugby players (Parker Croft and Brad Bukauskas) are the hardest hit by the gay love bug. But what makes this plot have its real bite, though, is in who DOESN'T get the potion: Timothy's mother (Judy McLane), who is struggling to understand her son's sexuality, the principal (David Darrow), who is struggling to keep his school together as the star members of the rugby team pair up and are found dancing and singing on the field, and canoodling in each others' beds, and Frankie (Zelda Williams) a unique girl and best friend of Timothy, and would-be girlfriend of Max. Ultimately, the whole experience opens the eyes of all concerned, realistically, not everyone ends up on Timothy's side, but all have a new perspective. When the very production that started all of this comes under fire and might not open, the drama teacher (the ethereal, wicked and very cool Wendy Robie) convinces Timothy that he must get everyone back to the way they were and hope that maybe they will learn to be more tolerant. The ending, which has both crowd-pleasing elements and healthy doses of a reality check, I won't give away, but you'd have to be a very hard case not to be moved by it. 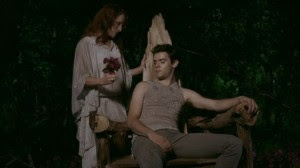 OF FANTASY SEQUENCES, DREAMS AND REALITY 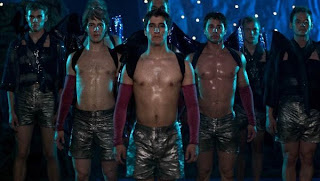 One can only guess that writer/director Tom Gustafson and his design team have practical stage experience, as this low-budget film relies on stage effects over computer and film effects. One of the most effective sequences, the title number "Were the World Mine," where Timothy realizes that the play and his potion are the key to getting the world to be the way he likes it, starts in Timothy's bedroom, and moves into the gym/auditorium of the school and on the stage set. Rather than morphing the scenes, using green screens or even fancy film cuts, Gustafson reveals the sequence as he would were he confined to the Broadway stage. The reality of Timothy's bedroom literally breaks as the wall opens, revealing, in successive pools of light, the gym floor, Jonathan in a midsummer slumber, the rugby team as the fairies, and finally the stage where Timothy, as Puck, can weave his magic. Production designer Cory James Kruekeberg and costume designer Elizabeth Powell Wislar have created a big budget feel with limited funds: it is a gay fantasia filtered through the eyes of a small town gay teen. The emphasis is on glamming up the dreamers, and sexing up the hot jock boys, who as the fairies are topless (but evenly sweaty - think brushed on Vaseline) and in sparkly short hot pants. The choreography by Todd Underwood clearly takes a teen's fantasy world and MTV style dancing into mind. The rugby players/dancers are sexy in a teen lust kind of way, but all manage to maintain some semblance of innocence and sweet awkwardness. In fact, the same could be said of the whole film. 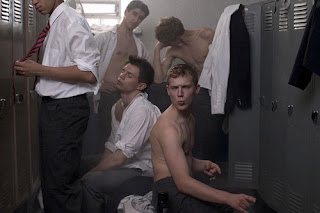 It manages to be the gay film gay audiences want. Lots of teasing with cute boys, who look just enough like high school age to be naughty, but are clearly old enough not to be jail bait. There is the requisite locker room scene, complete with just showered guys dressing, touching each other in a teasing way, with anti-gay banter to fill the void. The star of Timothy's love life manages to be shirtless and/or sweaty in a rugby uniform for most of the picture, and the rest of the boys saunter around in school boy uniforms, untucked, unbuttoned or slightly askew, or they are in a shirts (dripping with sweat) vs skins (sweaty, bare chested) gym game. And when they are effected by the potion, they all kiss like porn stars. Yes, Gustafson makes sure all the "gay" buttons are pushed. But he also balances things with subtle bouts of innocence and behavior that shows how similar gays and straights really are: sweet hand holding, falling asleep cuddling, moonlit professions of love, and heartfelt angst when the pursued aren't interested in the pursuers, all of which are the same no matter your orientation. By playing both sides of this complicated coin, the film manages to please the gay film crowd, the struggling with sexuality crowd, and shows the uninitiated that all of us are pretty much the same in matters of the heart. The difference is merely plumbing.


Sure, lots of plays, musicals and films have covered this territory. But very few have done so with as much intelligence, heart or creative understanding. I recommend this film to anyone who loves a good story, Shakespeare, the theatre, musicals and simply good movies. Were the world mine, there would be a lot more movies like this one.