To be sure, Broadway has continued its tradition of having some of the sexiest men and women alive on the boards each season. And each month, I seek to highlight a gentleman who has the exceptional gifts of talent AND beefcake, that intangible draw that some people just have. And so, today, to wrap up my 2009 in Review, I am choosing my pick for Broadway Boy of the Year, Mr. Broadway 2009.

I had initially picked just one guy who more than fits all of my criteria: A. easy on the eyes, B. unmistakable talent, C. that something extra that makes him stand out in a crowd. And to be sure he has all of this in excess - 2009 was an exceptional year for the guy.

But then some more recent events made me reconsider. But in reconsidering, I faced another dilemma - they are thought of as a pair, so could I choose one over the other ? I couldn't. So I lumped them together as one. In this case, these two gentlemen are inextricably one unit. One amazing unit. But my initial choice was still a viable one.

So what's a blogger to do? Name all three as Mr. Broadway 2009, of course! And because it is a given that all three are hotter than a fry machine at McDonald's, but their achievements are so much more important than their looks, I've decided that there will be no shirtless (or less) pictures of them - you can look that up yourself. Instead, I have chosen pictures that show then doing what they do best (perform) and doing what makes them the men of the year.

And so, without further ado... 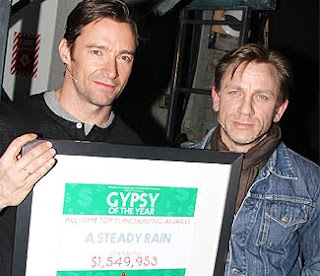 Not since the year of Side Show, when Alice and Emily were the hottest pair on Broadway, has the Great White Way seen a more dynamic duo. Before they even arrived, the street was full of gossip - could an Aussie and a Brit convincingly play two Chicago cops? It mattered not in the long run, as their vehicle, A Steady Rain, proved to be critic proof and became a blockbuster hit. Half of the pair was a no-brainer, not since the boy from Oz played The Boy from Oz was such a Broadway darling. Yes, Mr. Hugh Jackman was a star of film, unlike many others came to Broadway to legitimize himself, create huge box office and leave. Hugh didn't just come and go. No, he remains active in theatre, and is an active celebrity on the charity circuit. In fact, his last go-round had him get and hold the record for the most money gathered by one show for Broadway Cares/Equity Fights AIDS. The record ($600,000.00 plus) held for years, until this season. Who broke the record? Why Wolverine and his sidekick, 007! Yes, Jackman and Craig obliterated the old record, and brought in - BY THEMSELVES - $1, 549,953 in the Gypsy of the Year Competition! That total represents just under 1/3 of the grand total collected by all of the shows ($4,630,695!). It would seem that selling the shirt off your back, some autographed Playbills and posters, plus some backstage passes are recession proof. And good for them, and for all of us. It is pretty easy to see why Jackman and Craig are Mr. Broadway 2009. 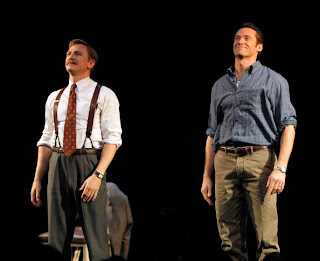 Daniel Craig and Hugh Jackman in A Steady Rain 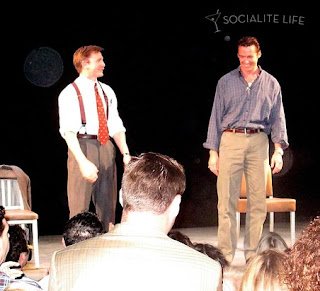 The boys make their curtain speech plea for big bucks. 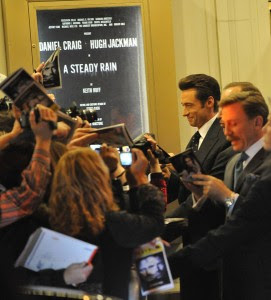 Jackman and Craig meet their adoring fans at the stage door. 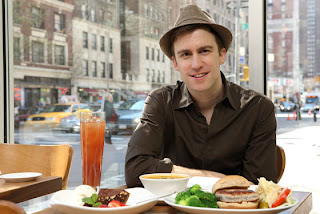 My initial choice, Mr. Creel had an up and down year at the start of 2009. Fresh off of closing in Mary Poppins in London, Creel was announced for a starring role in the revival of Godspell. But that never happened. Instead, as fate would have it, Jonathan Groff (also rumored to be his boyfriend) could not transfer to Broadway with the Public Theatre's Hair revival. Next thing you know, Gavin is playing Claude, earning critical raves, audience adulation and a Tony nod! But, like his cast mates, he wasn't content to just play the role of enlightened hippie, he wanted to spread the show's message of peace and love and equality to the masses. Several "be-ins," some soul searching and some long talks with cast, crew, producers and other Broadway babies later, he convinced the powers that be to shut Hair down for a day in October, so that the cast, crew and a thousand or so friends and fans could put their money where their mouth is and participate in a march on Washington, DC for gay rights and equality for gay marriage. And as if a hit show and some high-profile protesting weren't enough, Mr. Creel also formed Broadway Impact, and organization that uses Broadway shows, performers and friends as a gathering point for people to protest as one for equal rights for all citizens to marry, and related rights to health care, insurance and other benefits enjoyed by heterosexual couples. Despite victories in Washington, DC and other places, high profile defeats to bills on the issue in New York and California make Broadway Impact all the more important and relevant. A terrific actor, a genuinely nice guy, and true patriot, who better to choose as Mr. Broadway 2009 than Gavin Creel? 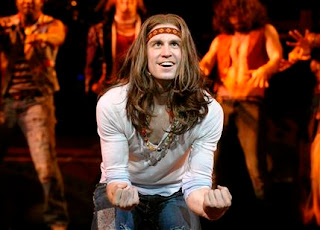 Gavin as Claude in Hair. 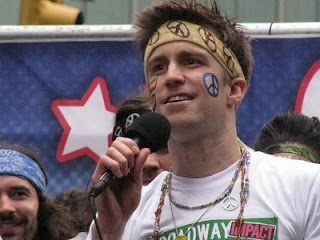 Gavin at a Broadway Impact rally in New York in support
of an equal rights bill concerning gay marriage. 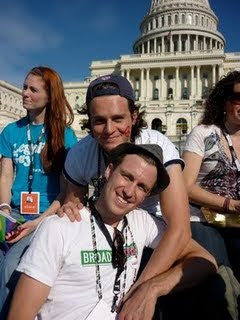 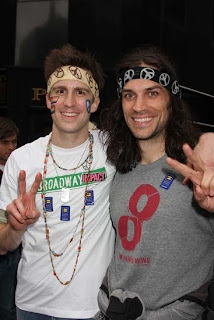 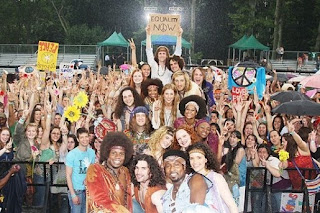 Gavin and the Hair Tribe at one of many events in 2009.

Comments? Leave on here or email me at jkstheatrescene@yahoo.com
Jeff
Posted by JK at 12:01 PM