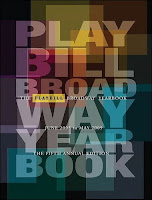 If you really love Broadway, I can't think of a better series of books to invest in than The Playbill Broadway Yearbook. And there are several reasons for my opinion on this. First, it is relatively inexpensive - it lists at $35.00, but I have never seen any edition NOT on sale be it at Playbill Store.com or at Amazon.com. As of this writing, it is currently "on sale" at Playbill Store.com for 34% of, or $22.95, while at Amazon.com it is selling for $23.10. The difference might just lie in the shipping and handling. Second, it is comprehensive, covering every show that was open between June 1, 2008 and May 31, 2009, including holdovers from years past (Phantom), shows from previous seasons that closed (Xanadu, Legally Blonde), shows that closed quickly (American Buffalo), and shows that continue to this day (In the Heights). It also includes entries of all the major Broadway events like Broadway Bares, Broadway Barks, Broadway on Broadway, the Easter Bonnet Competition, and many more. It is like being there when you can't get there yourself. Third, and perhaps the most appealing, is that it is written to be accessible to anyone from newbie to seasoned theatregoer to theatre professional. It is funny, offers insight into a life in the theatre and it contains thousands of color and black and white production photos and backstage candids.

I especially love the "yearbook" format it takes on, with each show getting several pages:
Most shows also feature a backstage Scrapbook, written by a "correspondent" selected by each show, who then fills us in on such varied topics as cast nicknames, backstage rituals, special guests, worst flubs, and even a report of cell phone interruptions during a performance. The correspondents are usually cast members (Gregory Jbara handles Billy Elliot, and Adam Chanler-Berat covers next to normal, for example.)

Here is a link to the product description at Playbill Store.com. Scroll to the bottom to see several pages from Billy Elliot and next to normal for yourself.
http://www.playbillstore.com/plbrye2020se1.html

There is also a faculty section, showing all of the people from various unions and theatre contractors who make the shows happen every night, a comprehensive, easy to use index and even autograph pages!

There really is something for everyone in these volumes. Best of all, if you don't have earlier editions, you might want to start with volume I at $8.00, II at $9.00, III at $10.00 and last year's at $16.95, all at Playbill Store.com. Who knows how cheap this year's will be next Christmas! At any price these are an investment in Broadway history and they fulfill the same needs as the Playbills and souvenir programs you could buy for much more money. Trust me, you'll get addicted!