OK, someone please slow down the clock! It is the third week of December already??!! Argghhh! One week until Christmas!

2009 IN THEATRE ROUND-UP
Everyone and their brother is doing end of the year wrap ups, so why should I be any different? I thought I might do off-beat and topical categories and name best shows/performers/etc. from 2009 that might fit each. For example: Topical Categories: Best Broadway Debut, Best Show Logo, Best Show Website. Off-Beat Categories: Best Straight Kiss, Best Gay Kiss, Strangest Prop.

So far I have about 30, mostly topical, recognizing the efforts of people who might not normally get recognized. Can you help me come up with more topics? Possible nominees? Winners?

Write to me at jkstheatrescene@yahoo.com with your ideas!

SMALL PET PEEVE
This pet peeve occurred first when we spent endless and countless hours listening to people and the media and other folks who should know better talking about the beginning of the millennium as January 1, 2000. Well, that is not the case. Since A.D. started (or maybe the modern calendar, or whatever) started with the first day of the year one, the last day of any millennium would be the last day of the 100th year of the given millennium. That means the 20th Century started 01/01/1901 and ended 12/31/2000. The new millennium started 01/01/2001.

That said, there are polls, surveys and "best of" lists for everything from TV, music and stage to biggest news stories, etc. of "The First Decade of the 21st Century." The truth is that the first decade of the new millennium ends 12/31/2010, roughly 379 days from now. You will see, God willing, my best of the decade stuff this time next year. (NOTE TO MY FRIEND AND FELLOW BLOGGER, SOB: I whole-heartedly approve of your "Best and Worst of the Noughties," as the Noughts started 01/01/2000 and will end on 12/31/2009. That is why YOU are the theatre blog master and I am a mere follower! :-) 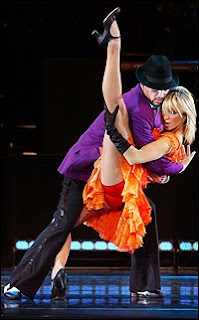 NAMING NAMES
One of my first blogs had to do with the Tony Committee dropping the Special Theatrical Event category, and how it would make things interesting when certain types of shows came to town. Well, here we are. This week, the powers that be determined that Carrie Fisher's one-woman show would be considered a play, and the ballroom dance extravaganza Burn the Floor would be considered a musical. Fight this over amongst yourselves, but here is my bit and piece on that: I can see Wishful Drinking as a play. It has a script and is presented theatrically. Beyond that, should Carrie Fisher even be considered for an acting award for playing herself? And I can see Burn the Floor as a musical in so much as the piece has music as a dramatic element and it is presented in a theatrical way. Does that mean the Maks from Dancing with the Stars should be eligible for acting awards? I mean you hear it on every episode: "You must also 'act' the part in the [insert dance here]." OK, maybe those examples are extreme. But will anyone call foul when it is nominated for Best Choreography (anyone remember the brouhaha over Swan Lake?) ? 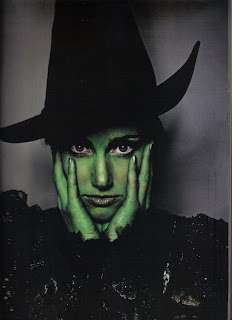 SOMETHING GLEEFUL THIS WAY COMES
Yippee! The other half of the Wicked dynasty has joined the Glee family. Yes, Idina Menzel (above), Broadway's original Elphaba, will, like her Glinda co-star, Kristin Chenoweth (below, with Glee star Matthew Morrison), be a part of season one of Glee. Interestingly, given the hubbub surrounding how much Ms. Menzel and Glee star, Lea Michele look alike, it appears that the former will appear as the glee club sponsor for the rival club that features Lea's Spring Awakening co-star, Jonathan Groff. (I love Broadway cross-pollination!), and NOT as Miss Michele's onscreen mother. Of course, who knows? Maybe her long lost mother is the glee club coach for the rival team. And there is no word yet as to whether Idina and Kristin (as fans refer to them) will share the screen at all. 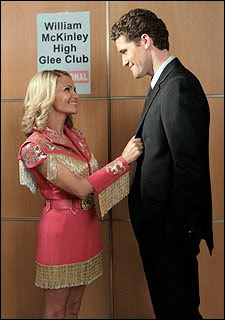 CREEPY, KOOKY and EXCITING!!!
Looks like I won't be faced with the ugly, plain gray facade of the Lunt-Fontanne the next time I emerge from the Marriott breezeway! And I find the Chicago reviews to be just what they should be... a new show trying out of town is looking for that kind of critique and praise to help shape the final product. I am SO looking forward to this one! 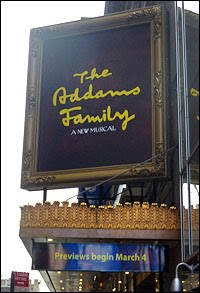 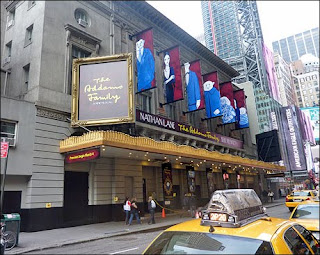