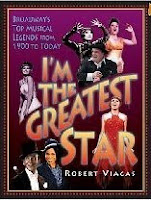 I just got another great theatre book - I have great friends who know what I love and Christmas came early this year! This huge book is another must-have for musical theatre lovers and theatre history fans. And if you love a particular Broadway superstar, this book is also for you.

Written by Playbill Online founder and editor Robert Viagas, I'm the Greatest Star: Broadway's Top Musical Legends from 1900 to Today offers fair treatment - he not only covers the highlights, but also the stumbling blocks - of the careers of 40 Broadway stars (39 chapters, with Fred and Adele Astaire sharing a chapter). For example, the author very candidly discusses the racism faced by Bert Williams, the first Black (he was not African-American) performer to break the color barrier on Broadway, often appearing in his own acts or as a part of the Ziegfeld Follies. Viagas also discusses the media backlash against Donna Murphy, who at one time made the New York Times for failure to appear in Wonderful Town; ultimately, the truth was she suffered from a series of tragic miscarriages, but for awhile she was the negative talk of the town. He tells of his first-hand experience at the infamous Julie Andrews press conference/post show media lashing over the "egregiously overlooked" Victor/Victoria. The book is full of such juicy tidbits.

Wicked fans will have to debate amongst themselves as to whether Viagas chose the right diva as "legend," in choosing Kristin Chenoweth (if you asked me today, I'd say he made the right choice in terms of Broadway star power). But, as with all of the really modern choices, only time will really tell if they have all earned their place in the book. And while I agree with most of his choices, I really have to question the inclusion of Brian Stokes-Mitchell. Is he a terrific performer? Sure. But legendary? I'm not so sure. I can think of several actors with similar resumes that aren't included and rightfully so (Howard McGillin comes to mind immediately) because they are great stars of the Broadway stage, hard-working, with careers in the theatre. But they aren't superstar/legend types. By his own definition, Viagas describes a star as someone who could be wearing a sack, and yet, when they walk into a room, they command attention and respect (I'm paraphrasing here). And I also have to ask: Christine Ebersole, but NOT Betty Buckley or Liza Minelli or Harvey Fierstein? I also find myself wondering who might be added in furture volumes. Cheyenne Jackson? Alice Ripley? Matt Cavenaugh? Laura Benanti? Michael Cerveris? Gavin Creel? Time will tell!

If there is a downside to this volume, it is that there is a lack of photographs. Each chapter starts with a full page image of the star in a show. The pictures included are interesting and not typical - Ebersole in 1980's Camelot, Tommy Tune in the national tour of Bye Bye Birdie are but two fun photos. But it would be nice to see some shots of these people doing what they do best throughout each chapter.

Also, there are a few errors in facts that I found, most likely editing errors (which I know plenty about, myself - thank you readers!). For example, Chita Rivera won the Tony on 1993, not 1991 for Kiss of the Spider Woman, and while Angela Lansbury did win the Tony for Mame in 1966, the show itself did NOT win the Tony for Best Musical. That honor went to Man of La Mancha, a fact not mentioned in the chapter about Richard Kiley. Factual blips aside, it is clear that Mr. Viagas reveres his subjects, affection for each as obvious as his respect for each.

Comments? Leave on here or write to me at jkstheatrescene@yahoo.com
Jeff
Posted by JK at 1:01 PM