From Temp to Full Time

These days, any job, just about, is a good and fortunate thing to have. I remember years ago doing temp work to fill in my budgetary needs. They always dangled that"if things work out/if business picks up, we'll offer you a full time position" carrot on the first day of a new assignment. Sometimes it worked out, sometimes it didn't. 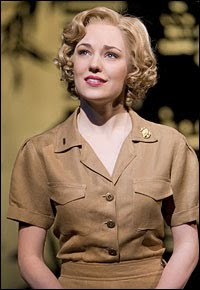 South Pacific announced that Laura Osnes, who "temped" for Kelli O'Hara during that star's maternity leave, will assume the role full time on January 5, 2010. By all accounts (that heard and read, anyway) Miss Osnes did a very nice job as the nurse who wants to "wash that man right out of her hair." At least at first, her co-star will be Tony winner Paolo Szot, and then his "temp" replacement, David Pittsinger will take over as Szot assumes an opera role at the Met in March. (There has been no word about if that temp will become full time or not.) Most recently, Laura Osnes played Bonnie in the world premiere of Bonnie and Clyde, a new musical by Frank Wildhorn, that has its eye on Broadway in the future.

Meanwhile, a day earlier, January 4, 2010, once "temp" Kyle Dean Massey will become the full time Gabe in next to normal, taking over that role from the departing Aaron Tveit. Earlier this year, Massey spelled Tveit while the latter took part in the world premiere of Catch Me If You Can: The Musical, which, like Bonnie and Clyde, is said to be Broadway bound. Mr. Massey is no stranger to the temp-to-full-time job, having taken over the role of Fiyero in Wicked from Mr. Tveit as well. Unofficially, though hardly a secret, several times, when Aaron Tveit was called to film his role on "Gossip Girl," Kyle Dean Massey would hop over from Wicked to play Gabe in his absence. (I always wondered what Tveit's understudy felt about that...)

While I have not seen Miss Osnes in her show, I can tell you that Gabe is in very capable hands with Mr. Massey. I had the good fortune to catch his performance the first time around. In a previous blog, I think I mentioned that he seems to really "act" the role more, while Mr. Tveit concentrates on power belting to get his point across. Both are valid interpretations, and I loved both actors in the part. Maybe a return trip to my favorite show is in order...

(Photos: Osnes in South Pacific and Massey in next to normal. Both photos by Joan Marcus.)

Comments? Please leave one here or email me at jkstheatrescene@yahoo.com. Thanks!
Jeff
Posted by JK at 12:01 PM