Well, thank you, first, to the 5 of you that voted, a 25% increase over October! No, seriously, anyone who reads and/or votes at this blog, you have most humble appreciation. (Now pause and vote in this month's poll!) Now to the results!

3 out of 5 of you (60%) chose my personal favorite Broadway news site, Playbill.com aka Playbill Online. 1 out of 5 (20%) chose my second favorite, Broadway.com, and the other 20% of you picked BroadwayWorld.com. (No one voted for TheaterMania.com, and no one wrote in a different site.) All of the major sites have their pluses and minuses.

I think the very best thing about PBOL, which also makes it my favorite, is that it is easy to navigate. The contents lists are simple, the breakdowns easy to choose from. And the layout facilitates easy navigation as well, with current news (updated frequently) prominent in the center and in size. All the most recent news remains on the page for a longer period of time, and the "more news" link at the bottom of the home page makes it easy to catch up if you miss a day or two. 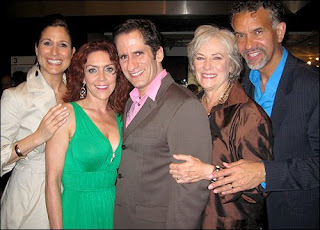 I also like that their longer stories (generally the ones that appear in the physical magazine) are also prominently featured down the left of the main page, and that their photos, multimedia and the like are easy to find at the bottom of the home page. Three of my favorite features appear regularly: Seth Rudetsky's HILARIOUS Onstage and Backstage weekly column (Seth is center in the above picture with (l to r) Stephanie J. Block, Andrea McArdle, Betty Buckley and Brian Stokes Mitchell), the regular music review On the Record, and The Leading Men, a monthly feature about men making a splash in New York Theatre. Diva Talk is another favorite column as is The Week in Review. Hmmm. I guess I pretty much like all of the regular features!

Three more very important features that I use frequently: Playbill Radio (a point and click away from your favorite musical theatre songs and interviews and the like), a quick link to the Playbill Club (where I get most of my discounts and it, too is easy to navigate and it is FREE!), and the link to the Playbill Store (which is rapidly becoming my favorite shopping site on the net - I'll do a separate blog on THAT.) Finally, trivia buffs will love the section on the lower right of the home page, "Insider Info", where you can find a current list of the Longest Running Shows, upcoming shows, upcoming cast recordings and many other things.

So, what, if anything is the downfall of Playbill Online (Playbill.com)? There are a few things:

1. The search feature is ridiculously hard to use. Things that I know exist come up as "no article found". You have to figure out how to phrase your search, and you'd think show titles would be a no-brainer, right? Try typing in "Hair" and see what you get. You get what you'd expect an a whole lot more. Google this ain't!

2. They have started embedding ads in the actual articles. Granted, they are 100% theatre-related, but they interrupt the flow of the article and sometimes appear before the article even starts! Aren't the well-placed ads that border the page enough?

3. They are starting get cluttered in what appears to be an effort to keep up with the Joneses. and coming from a blogger this will sound snooty, but why do they have two blogs: PlayBlog and Inside Track? They aren't discernibly different, and they feature short news features that could/should easily fit under their news category. I mean no offense - they are interesting and reasonably well-written, but it smacks of trying to stay "hip" when they don't need to and it clutters up the page even more.

That Playbill Online is so easy to navigate is its best feature as far as usability, but they can stop adding things before the become like other websites that have so much going on that you can't find anything easily... my biggest peeve with BroadwayWorld.com and TheaterMania.com. CLUTTER, CLUTTER, CLUTTER!

Anyway, thanks to those of you who voted. PLEASE vote in this month's poll. It closes Christmas Eve. Jeff
Posted by JK at 10:33 PM