DON"T FORGET: This weekend is your last chance to vote in this month's poll...

This week has truly been a celebration of theatre and a theatre legend.

WHAT YOU MIGHT HAVE MISSED THIS WEEK:
NOTE:  Several of you have written to ask about when I post new blogs.  Generally, they should post between 12 noon and 12:05 PM (Eastern Time) daily.  Reviews of shows that I have seen before they officially open (Million Dollar Quartet, American Idiot, Sondheim on Sondheim, La Cage aux Folles) will post at 12:01 AM the following day.  For example, Come Fly Away, which I saw in previews officially opened the evening of March 25th, so my review posted at 12:01 AM on March 26th, like the newspapers do.  Other shows that I see after they open (Next Fall, The Addams Family, The Miracle Worker) I will post reviews as soon after I see them as I can.  Mostly, though, I want to thank all of you who read so regularly and religiously, and actually care about my opinion!  :-)

Every March 27, the world celebrates one its oldest and most enduring art forms, live theatre.  Around the world, patrons and artists alike take in thousands of performances - some planned, others impromptu.  This year's worldwide message of celebration was by Dame Judi Dench.  The United States' message was written by playwright Lynn Nottage.  Visit the World Theatre Day Blog and find out how it was celebrated on every continent, from France to Ghana to Mexico.  I commemorated the occasion by working on this blog, listening to the OBCR of 9 to 5: The Muisical, and watching Sweeney Todd  - both the Angela Lansbury stage version and the Johnny Depp film version.  How did you celebrate? 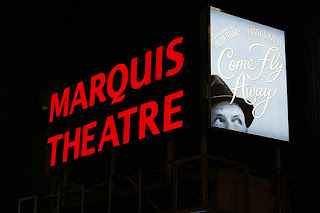 With Come Fly Away looking like a new hit, the Marquis Theatre was in the spotlight this week.  But it might have been anyway.  If you haven't been there recently, the Marquis Theatre Box Office is no longer on Broadway.  Instead it has been moved to where the temporary TKTS booth was on 46th Street, steps from the Richard Rodgers Theatre.  The marquee for the Marquis is now in two places:  where it always was on Broadway, looking at Times Square, and now a modern metal and light mini-marquee (in comparison) lights up the sidewalk where the new BO is.

BROADWAY ON THE 11 O'CLOCK NEWS 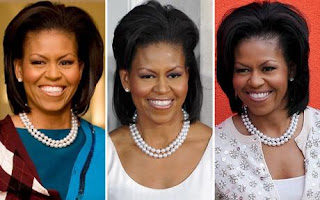 First Lady Michelle Obama continues to set a terrific example for her girls and the nation.  First, she creates an urban garden on the White House Lawn, then she earns a Nickelodeon Award for her outstanding work to get kids away from the TV, on their feet and exercising, now she is taking the family to the theatre!  Good for you, Mrs. O!  As you no doubt heard, last week, the First Lady and her daughters took in Memphis and a preview of The Addams Family.  In a case of the ultimate in good taste, apparently Mrs. Obama went against Secret Service suggestions to leave each show during the curtain call.  No!, said she.  We will stay for the entire performance and the very last bow.  What an excellent lesson for her children and all of the RUDE patrons who feel the need to run out before the last bow.  Running out is rude, disruptive and very unapreciative of the hard working cast.  Clearly, Mrs. Obama is raising two refined young ladies of culture.  Thank you!

MEMPHIS ON THE ROAD 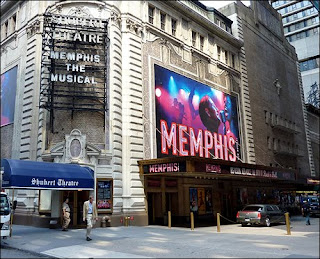 Memphis made the news twice this week!  It was also announced that in 2011 the show would begin a National Touring Company.  Not bad for a show that this time last year no one had heard of, then took the fall season by storm, and still going strong at the Shubert Theatre. Take THAT nay-sayers!

TONY AWARDS IN THE NEWS

The Tony Awards Committee stunned the theatre community by announcing that starting this season (2009-2010) the First Night Press Corps would lose its voting priviledge for the awards, effectively silencing over 100 members and the journalists who cover theatre.  Massive protests ensued, and they sort of changed their minds.  Sort of.  Starting next season (2010-2011), the New York Critics Circle, consisting of about 20 members, will have full voting priviledges.  It is a start...

THE BIG NEWS OF THE WEEK: STEPHEN SONDHEIM 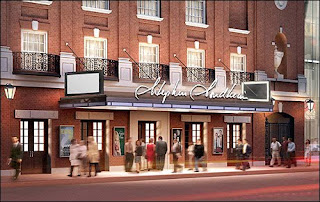 Celebrations of theatre great Stephen Sondheim's 80th birthday continued, and this week actually included his birthday date!  Song filled tributes to the man who changed lives and theatre as we know it were the order of the day, and tearful speeches were given.  Of course, the biggest and probably the best gift he could ever have imagined is that very soon the Henry Miller's Theatre will be renamed the Stephen Sondheim Theatre!  What a tribute!

BROADWAY BY THE NUMBERS
Happy Birthday Last Week to: