I have often written on this blog about my penchant for darker, more serious and challenging musicals.  I've said (to a few jeers from you readers) that I like my shows with a little sting to them.  Perhaps that's why I'm drawn moth-like to the Sondheim flame (Sweeney Todd, West Side Story and Company are my three favorites of his) or why I can't seem to get enough of the Kander and Ebb "evil trio": Chicago, Cabaret and Kiss of the Spider Woman.  All six are full of troubled souls, society gone bad, tragedy and much pathos.
So, last week when The New York Times published an article called "New Musicals That Strike a Somber Chord" by Felicia R. Lee, I lapped it up like cream.  The article focused on three current and soon to be off-Broadway musicals, The Scottsboro Boys, Signs of Life and The Burnt Part Boys (pictured, left) all of which portray varying levels of human depravity and the human spirit.  They celebrate life by dissecting the darker side.  All, as the authors of these shows point out, because people crave theatre "that has some weight, that justifies putting your money down"  "People are hungry for that in musical theater."  That really speaks for me and many of my friends.  You know us.  We are nourished by Passion, The Wild Party and Floyd Collins.  (To be fair, I, and most of my friends also love a good time at a show - Mamma Mia!, The Drowsy Chaperone  and Xanadu are three of my silly favorites.)  You see, we can see the entertainment value in boith the mind-stretching shows and the belly laugh shows.  All we want is a good story, good acting and a chance to see some part of the human experience live in front of us.

So, in reading this article, I got know a bit more about three musicals I know I would love, provided they are well-executed.  I've written about The Scottsboro Boys, (pictured, below) and read with interest the reactions of early preview-goers to the minstrel show style with the white interlocutor and the black ensemble playing all roles - genders and races.  Sign of Life, about a woman in a concentration camp who is made to use her artistic skills to create art that depicts life at the camp as propaganda tells it, while smuggling out her real works that depict the horrors.  And The Burnt Part Boys, the only completely fictional story of the three, still sounds mightily engrossing, as it tells the story of a group of high school boys whose fathers died on a West Virginia mine, and how the deal with things as the mine readies to reopen.  (Andrew Durand who is currently in Yank!, will also be appearing in this show later this spring at the Vineyard. 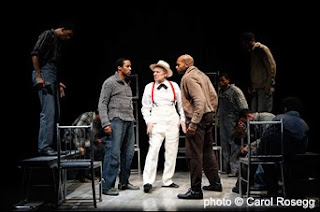 That most shows with this darker side don't even try to venture to Broadway is both understandable and a shame.  But, of course, that depends on whether or not you really see much difference between Broadway and off-Broadway.  Gone is the stigma that off is somehow less as more and more writers, actors and other creative artists have very healthy careers going back and forth between the two.  To me, if Kander and Ebb, Susan Stroman and multiple Tony winner John Cullum are willing to work for less at a smaller space doing work they love and believe in, that is not less.  It is more.

The real truth is that off-Broadway has become the Broadway show out of town tryout, with much less expense.  Don't tell me, that with a pedigree like it has The Scottsboro Boys isn't seriously hoping to make the leap.  What is holding it back?  It's daring, controversial syle and content.  And who can blame them?  In these times, you have to be very careful.

"The Evil Trio"
Still, look at the most recent "dark musicals" on Broadway.  Spring Awakening, the subversive and naughty Avenue Q, the subversive and naughty revival of Hair, Grey Gardens, next to normal.  Where did most of them start?  Off-Broadway!  Every season, there seems to be at least one "thinking person's musical".  Heck, every season for years there's been at least one Broadway revival of a show by the King of Darkness, Stephen Sondheim.  And it looks like this year's "thinking person's musical" will likely turn out to be a revue of his works, Sondheim on Sondheim!  Off-Broadway likes him, too... in recent years a major revival of Merrily We Roll Along and Saturday Night, the revues Marry Me a Little and Putting It Together all did major time off the Main Stem.

More and more, serious theatre-goers are looking everywhere for their musical nourishment.  I'm just a little surprised that people are just sarting to notice what most of us have known for a long time: off-Broadway costs less, but a lot of the time you have to work much harder as an audience member.  For those of us who thrive on that, I say, "BRING ON THE DARKNESS!"


Comments?  Leave one here or email me at jkstheatrescene@yahoo.com.
Jeff
Posted by JK at 9:00 PM