This series of blogs looks back at shows that are specifically relevant to shows happening today. Previously, I looked back at two Twyla Tharp shows because her current show is opening soon. Starting today, I will be looking back at musicals that may be related to the now-previewing Million Dollar Quartet.

First up, Buddy: The Buddy Holly Story, which, like MDQ tells the true story of a rock ‘n roll legend, and focuses primarily on a key event in the subject’s life.


BY THE NUMBERS
Buddy played at the Sam S. Shubert Theatre.


Cast members: 26 cast members, and one understudy that was not already part of the cast. Led by Paul Hipp as Buddy Holly, the rest of the company played numerous roles each; from recording people to Apollo band members, to The Crickets, and the folks in Buddy Holly’s life. Ken Triwush was his alternate. The only ensemble member of any measure of fame beyond Buddy is Jill Hennessey, who went on to star on Law and Order and her own series, Crossing Jordan. Of the 26 cast members and director Rob Bettinson, only six went on to other Broadway shows: Ken Triwush (Titanic), Don Stitt (Forum…), Steve Steiner (State Fair), David Mucci (the original Ragtime), Alvin Crawford (Candide, The Lion King), and Phillip Anthony (Not About Nightingales). Paul Hipp has gone on to an extensive TV and film career, both in front of and behind the camera. Perhaps, because this production, produced in part by Canadian impresario David Mirvish, has Canadian roots, the majority of players and designers are not likely to return to Broadway. (This is just a guess on my part.)
Awards:
The show was much more popular in London, with the original production running over 5,000 performances in 6 years and 5 months.


THE STORY
Well, we know the story. Buddy Holly, a quiet but determined singer from the sticks has a “different sound,” that “no one but Buddy can do.” He works his way up the food chain from local radio to state fair appearances, adds a back up group (The Crickets), meets a girl or two, he marries one to please his manager. She loves him a lot, we aren’t entirely sure about him, and she ominously begs him to promise never to fly in an airplane. He fights against convention (how conventional!), fights with the boss, the group, the wife. And, of course, as we know from the oft told story – on February 2, 1959, he boarded a small plane with Richie Valens and the Big Bopper after a Winter Dance Party Concert at the Surf Ballroom in Clear Lake, Iowa. There was a blinding snow storm, the plane went down, and that was the day the music died. 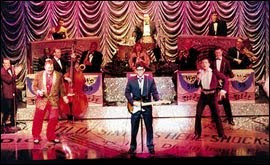 The Winter Dance Party in Buddy
Buddy told that story in two acts, pretty much depleting his limited song catalogue. The majority of act two was a re-creation of that final concert, including Valens and The Bopper. But, in spite of the fact that the rest of the show involved a whole bunch of scenery moving and costume changes, the rest of the show was really a Buddy Holly concert. Holly was not the most charismatic of performers, and that really worked against making the show visually interesting.
THE CRITICS
The critics gave producers enough quotes to pull out of their reviews for advertising purposes headlined, naturally, as “The Critics RAVE ON About Buddy!” (Get it? “Rave On”…). Pretty much everyone agreed that the plot was thin, and that the same story had been told better other places. They also agreed that the music sounded good, and that Paul Hipp did a very good Buddy Holly impersonation. The producers got their best ammo in quotes about the audience reaction. Of course, most were really of the “it must be the critic in me that hated it, but the crowd played along and screamed and danced after being coerced by the cast to do so.” But it made it sound like loud rock and roll and excited audiences made the show. The audience had its say, and the nominators were busy loving Miss Saigon and The Will Rogers Follies. Buddy didn’t last the season, closing after 1 Tony nomination and before it lost. 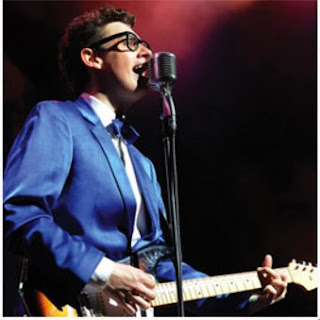 MY THOUGHTS
I am a huge fan of early rock and roll, and of Buddy Holly. I was really looking forward to seeing it, and when I did, I was very disappointed. I was hoping for perhaps a few small new insights, maybe some dramatic creativity, and to definitely be moved by his eventual demise. I thought Hipp was good, but not the best Holly impersonator I’ve seen, and I thought the concert aspect was well-played, but I hate being forced to participate. I remember leaving and thinking, “They made A Chorus Line close for this?” and “I enjoyed the Cast Recording more than the show.” Not a good thing. 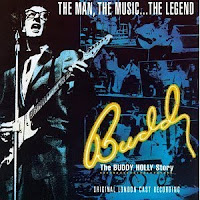 My fear is that I’ll have the same reaction to Million Dollar Quartet, as it is a re-creation of a very specific event in music history. I’m sure I’ll love the music, but I hope that the fact that I know so little about this event will at least lead to some interest in the story and the interaction between the characters. Plus, all four real life musician had performance charisma to spare, so I’ll assume that at the very least the actors will be interesting to watch. We shall see.
(PHOTOS: From the Buddy website, from various productions of the show.)