In honor of Million Dollar Quartet beginning Broadway previews today, I thought I'd take a look at their logo and see what it might reveal about the show.  In this case, a little research helped.

You see, as much as I enjoy the music of the early rock n' roll era, I had no idea that the "Million Dollar Quartet" was the name of an actual group of singers brought together for one mega jam session.  I thought maybe it had to do with the Beatles, or some harmonizing barbershop group that clawed its way to the top.  The first logo I saw that had to do with the show was this:

I knew the microphone standing in place of a letter meant it had something to do with music, and older music judging by the style of the microphone.  Other than that, my honest first thoughts were: "what the heck is this?" and "the color combination is classy and kinda cool."  On the plus side, I was visually stimulated by it enough to be curious.  On the negative, I was still pretty clueless and losing interest fast.

I wonder if they started (or continued) doing market research as the ads started and the box office opened.  Unless it was part of some big campaign to begin with, it seemd like they knew exactly what I was thinking, because lo and behold, they added the tagline, "A New Musical Inspired by the Actual Event."  And so Google and I went to work.  That's where I found out about the jam session, the album, Elvis' involvement, conflicting reports about Johnny Cash's contributions, how Jerry Lee Lewis got to the piano, and a fuller account by Carl Perkins about how it went down and what songs they jammed to. 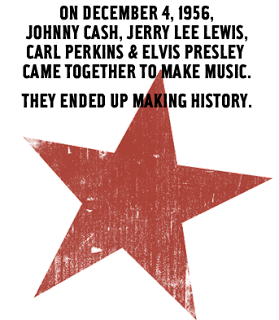 Suddenly the minute details of the logo made sense.  The lettering and the nearly complete silk screen style of the lettering suggested those old concert tour posters from the era.  The microphone "O" made even more sense and the ever so slight sun ray effect of the background color could be the representation of the Sun Records logo.  Sun Records is where all of this happened.  The logo and subsequent online ads also began featuring a "click here" that looks like an old record album.  It was finally coming together.

Then came the announcement that Broadway veterans Hunter Foster and Elizabeth Stanley were joining the cast, and all of the press releases featured them.  Wisely, as the show approached its first preview, there was a lot of press about the Quartet itself, and production photos began to surface more regularly.  I often have written that the logo draws you in, then it is smart to add production photos to really generate interest.  As you can see from the picture below of the doors outside the Nederlander Theatre, the combination is very effective. 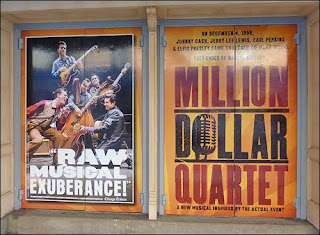 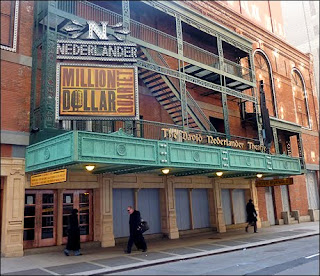 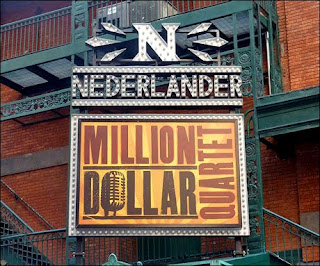 I have to admit I haven't heard much buzz about this Chicago import, but the advertising people are either really smart or really lucky.  Their little logo has morphed into a successful campaign, and has this ticket buyer increasingly interested.  I am really looking forward to seeing a preview in a few days!

(Photos by Matthew Blank.  The photo of the production is from the original Chicago production, which also featured what is now the Original Broadway Cast.)