THE SET UP: The reactions of the audience during the preview performance of Million Dollar Quartet that I attended pretty much say it all.  There was excited chatter prior to the start of the show, a hearty laugh at the joke in the "keep quiet during the show" announcement, and even applause as the curtain went up to reveal the titular quad of singers going full out on "Blue Suede Shoes."  It was kind of exciting, and I was hopeful.  Very hopeful.

Then Sam Phillips (Hunter Foster) comes out and begins narrating, doling out facts about what we are seeing like he is reading a list on Wikipedia.  Then, things get personal.  A sneer crosses his face, and the cockiness comes out.  Phillips has discovered what turns out to be four of the greatest names in rock 'n roll history - even though we are reminded at least ten times (I stopped counting at ten) that no one expects the "fad" to last, which gets a hearty chuckle the first and second times, not so much as the joke wears thinner.  He is also in a world of hurt - Elvis has left his small Sun Records for the big city charms of RCA; his first discovery, Carl Perkins has been eclipsed by Elvis and can't seem to find a follow up hit record; Johnny Cash has a bright future and a contract that has nearly ended; and Jerry Lee Lewis is a puppy that needs taming before he can start making hits.  Phillips is still taking heat for selling out Elvis, though he is quick to let us know that he's doing ok, having invested in a little hotel chain known as Holiday Inn. (wink wink, shit eating grin, uncomfortable pause) Then, after a few more snarky remarks, we are off recreating the "greatest night in the history of rock 'n roll." 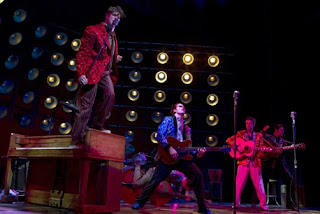 The Million Dollar Quartet - "Concert" Finale
THE PLAYERS: That is the set up for the show, and we watch as each star arrives and sings a ditty or two, and in between, they argue in a mostly charming way, setting up the egos and dynamic of a group of misfits with a common bond - music.  Jerry Lee Lewis (Levi Kreis) is the youngest - a crude hick with an amazing talent at the piano that everyone else is trying to ignore, until they finally have to accept that he is very good.  Carl Perkins (Robbert Britton Lyons) is the bitterest, and with reason - "daddy" Phillips promised him the moon, but that went to Elvis, who also got the gig on The Ed Sullivan Show, playing Perkins' song, "Blue Suede Shoes."  Much time is given to this slight, and you'd think Perkins would unleash a beast of anger at Elvis, but, in maybe the single smartest part of Colin Escott and Floyd Mutrux's otherwise "Weekly Reader" quality book, his anger is really aimed in the right place, at Sam Phillips, setting up a big fall for potentially everyone in the room.  Johhny Cash (Lance Guest) arrives heavy hearted and with a secret - he has jumped ship like Elvis to another label, and is here to tell Phillips.  Finally, there is Elvis (Eddie Clendening) - who arrives with new girlfriend Dyanne (Elizabeth Stanley) in tow.  He is the "brother in the family that got out and made it big" - the rest love, respect and envy the hell out of him.  He, paradoxically, wants to come back to Sun Records in the worst way.

THE "BOOK": All of the details come out in odd bits of narration by Foster, who looks understandably uncomfortable as he interrupts song after song just as they really get going (Jersey Boys anyone?).  We also get details from some "let's go get some air" conversations held "outside" the studio (designed by Derek McLane), including some actual insight by the one completely fictional character in the piece, Dyanne.  The effect of almost all of this is, as I said, mirrored by the audience reactions.  When they start playing a number we know, there is huge applause.  If they actually get to play the whole thing, the applause is heavy and well-earned.  If the song is interrupted (more often than not) the applause was significantly less.  And overall, the applause diminished over the course of the first hour and fifteen minutes.  (I'll get to the last fifteen in just a minute.)  And by about the sixth song, I, and nearly everyone around me began - stealthily at first and with carefree abandon at the end - to look at the song list in the Playbill, which is never a good sign.  In summary, we as a group wanted to love Million Dollar Quartet, but the "show" kept getting in the way.

Not that it was a complete failure as a script.  There is one extended bit of time without music, where all of the singers come clean and admit they are through with Sam and Sun, and where Sam, in desperation, begs Cash to stay, finally errupting into a tirade of betrayal fit for a Tennesse Williams play.  It, to a person, is brilliantly played, the tension in the theatre so thick you'd swear we didn't know what was coming.  And at that moment, one realizes just how terrific MDQ could have been.  For about five minutes, it was a completely engrossing human drama more about the family they really were than the stars we know them as. 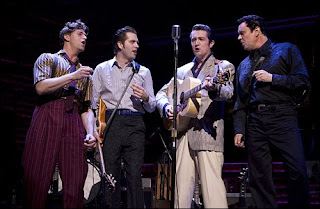 Levi Kreis, Robert Britton Lyons, Eddie Clendening and Lance Guest as
Jerry Lee Lewis, Carl Perkins, Elvis Presley and Johnny Cash
THE MUSIC: Not that it is a complete failure musically, either, the four actors (plus Corey Kaiser on bass and Larry Lelli on drums) are amazing musicians, Lyons and Kreis in particular, and they sing excellently as well.  It is a shame that much of the time, at least in the important opening 30 minutes or so, they don't get to finish what they start without interruption.   But I should note that it was wise by all concerned that they are not really doing impersonations, as much as they are doing "approximations" integrating signature moves when they perform and accents and inflections.  This is not a cheesey Vegas show of old in that regard.  Each actor gets to shine in signature numbers from their characters. Kreis, as Lewis, is amazing on the piano, and particularly on "Real Wild Child" and as one would hope, he wails on "Great Balls of Fire."  Guest, as Cash, is excellent with "Sixteen Tons" and "I Walk the Line," which got a hand before he even started singing it.  Lyons, as Perkins, plays a mean guitar, and sings the hell out of "Who Do You Love?" and "Party."  And Clendening, as Presley, charms with "Long Tall Sally" and "That's All Right."  Not to be left out, Stanley, as Dyanne, offers both of the evenings biggest and best surprises (and two of the biggest hands of the whole show) with a coy "I Hear You Knockin'" and perhaps the sexiest number of the entire Broadway season - a smoking hot rendition of "Fever" that works the boys and the audience into an absolute frenzy.  (Will someone PLEASE find a decent vehicle for Ms. Stanley!!??) 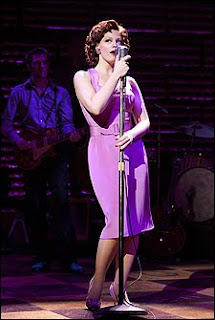 Elizabeth Stanley - "Fever"
As the history making event we have just witnessed draws to its conclusion, the audience makes a mystifying response to the recreation of the famous photo from the recording session.  Sam gets out his camera to commemorate the moment, huge strobes go off, with a flash sound effect, and complete blackout.  Then lights up to reveal the famous photo hanging large over the stage, with the four actors arranged similarly to the photo (but not exactly, and they are not wearing even similar clothes) and frozen.  The audience goes crazy (unless we were being supplemented by recorded applause, which is entirely possible).  I don't get it.  Oh, well. 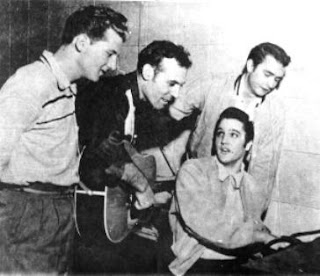 The "Real" Million Dollar Quartet
THE LOOK:  Then, in what has to be an attempt to legitimize bringing this trip down memory lane to Broadway vesus off-Broadway versus a small club showroom versus say, Branson, Missouri, the dingy (ok, it is accurate) set flys away to reveal an equally cheap looking concert stage.  From the heavens above, down flies a small bar with four sparkly Vegas style jackets (costume designs by Jane Greenwood), which the boys don, and give us a one song each rock 'n roll finale, complete with a woman who was dancing in the aisles.  (I'm thinking she's a plant, because she knows where to be to get their attention, and exactly how to manuever across the very cramped front row to end up just where she needed to be at the curtain call.  I could be wrong, but she hit certain marks flawlessly.)  And for about the last fifteen minutes, Million Dollar Quartet does what it should have all along - it entertains.  Each song is complete, and we are given time to show our appreciation.  That and the extended scene totals about 20 out of the 90 minutes of actual Broadway-caliber excellence.

I think director Eric Schaeffer, apparently the go-to man in the DC area, really needs to think about whether or not he belongs in the really big leagues.  What direction there is seems preoccupied with blocking, especially making sure that the actors are where they need to be during each flashback/mid-song interruption, so that Howell Binkley's better than decent lighting can be at its full effect.  The "outside" scenes are staged as awkwardly as they are written, and he has given virtually no guidance to Hunter Foster, another immense talent in search of a decent show.  The whole affair would be better if they'd just remember: Don't cheapen the already cheap.  Get rid of the Elvis "thank yuh, thank yuh vury much" and the sad run out by Foster, who screams to a departing audience, "Ladies and Gentlemen, Elvis has left the building."  Both occur in the final seconds of the show, and really bring it down, because until then, the one one truly positive thing I could say about the show is that it avoids being a cliche pretty well.) 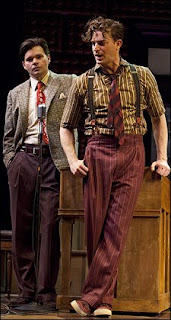 Hunter Foster as Sam Phillips and
Levi Kreis as Jerry Lee Lewis
I really and truly wanted this to be the rock 'n roll musical to break the string of boring shows that preceeded it.  Instead, it highlights the songis-interruptus of Jersey Boys and the plodding, fact-spewing, show-halting book style of Buddy.  What this show does do, that both of the others don't (and I know I'm in the minority for disliking Jersey Boys) is it features a core cast of terrific actor/singer/musicians who have an easy, natural rapport with each other, that is so real, you'd swear they were brothers in a family.  All four played the Chicago engagement of the show, and it shows.  Mr. Kreis and Mr. Lyons are particularly strong actors, and both Mr. Clendening and Mr. Guest ooze charisma.  Watching them perform as a group is really a treat, but the show they are stuck with is one of the best examples in some time of a show with heaps of promise and almost no follow through.

(Photos are of the Broadway Cast, by Joan Marcus.)

Comments?  Leave one here or email me at jkstheatrescene@yahoo.com.
Jeff
Posted by JK at 12:01 AM