The Lucille Lortel Awards, which honors outstanding off-Broadway theater, announced its nominees for the 2009 -2010 season yesterday.  Three of the five outstanding musical nominees are headed for Broadway, either this season or next.  If those three actually make the leap (and it looks likely) and the other two musicals born off-Broadway recently announced for the Great White Way make it too, they will be joining several other shows who started life off the main stem, in small intimate theatres.

The Scottsboro Boys, Yank!, Everyday Rapture
Yes, this time next year we may have Yank!, Hedwig and the Angry Inch, The Scottsboro Boys, and bare among the Tony Award nominees.  And those shows will be joining next to normal, Hair, In the Heights, Next Fall, Fela!, and the last entry of this season, the recently announced Everyday Rapture on Broadway.  Pretty exciting for a lot of people.

It wasn't all that long ago that Broadway shows either tried their luck directly on Broadway or did an out of town tryout in places like Boston, Philadelphia, Baltimore and Washington, DC.  Then there were more and more regional theatre tryouts - places like Seattle, La Jolla, Chicago - all far away enough from the New York press.  Of course, the Internet and those damned bloggers (oops), changed all that, and reviews are instant, no matter the show, the venue or the current state of the production.  (For an interesting point of view on Bloggers and Show Reviews Prior to Opening, click here.) 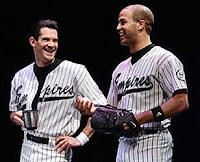 Avenue Q, In the Heights, Take Me Out
Regional tryouts and the occasional closer to home still happen, but more and more, Broadway is getting its newest hits from a closer neighbor - off-Broadway.  What used to be the norm is now completely the opposite.  And in a lot of ways, it makes sense.  First, you already have faced the scrutiny of the New York press and local theatregoers.  Second, you stand to lose a lot less money if you start smaller.  Third, New York-based actors and technicians can stay home, cutting huge hotel bills, and the same for carting scenery.  It has to be cheaper to lug stuff from Theatre Row or Greenwich to 45th Street than to haul it from from L.A.

And Broadway patrons are certainly benefiting.  As the theatre-going public's tastes change and become edgier, more modern fare is getting more and more attendance, off-Broadway makes sense as a place to get your next big hit.  Let's face it, Broadway has gotten more up to date, but off-Broadway is where the action really is if you want something with a little more to sink your teeth into. 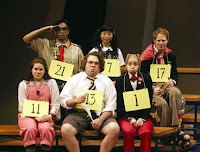 Spring Awakening, [title of show], The 25th Annual Putnam County Spelling Bee
Just look at what has come to Broadway from off since the 2000 - 2001 season (I'm sure I'll miss a few, so forgive.  The point will still be made, I think.): Proof, A Class Act, Urinetown: The Musical, Topdog/Underdog, I'm Not Rappaport, Frankie and Johnny in the Claire de Lune, Take Me Out, Avenue Q, Little Shop of Horrors, Assassins, Caroline, or Change, Frozen, Hair, Steel Magnolias, The 25th Annual Putnam County Spelling Bee, Doubt, Well, The Lieutenant of Inishmore, The Little Dog Laughed, Spring Awakening, Talk Radio, Sunday in the Park with George, Grease, Passing Strange, In the Heights, next to normal, [title of show], Slava's Snowshow, Oleanna, Fela! and Next Fall.