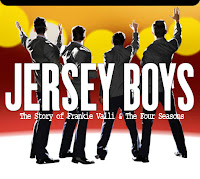 The "Looking Back" series of blogs looks back at shows that are specifically relevant to shows happening today. Previously, I looked back at Buddy: The Buddy Holly Story, which, like today's subject, tells the true story of a rock ‘n roll legend, and focuses primarily on the key events in the subject’s long career.  That makes Jersey Boys the perfect compliment to both Buddy and the soon-to-open Million Dollar Quartet.


BY THE NUMBERS
Jersey Boys opened at the August Wilson Theatre, where it continues today. 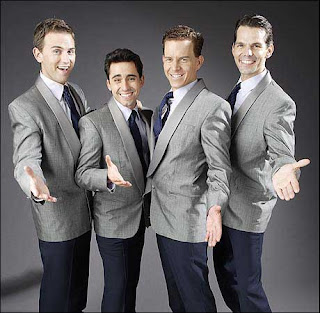 Daniel Reichard, John Lloyd Young, Christian Hoff, J. Robert Spencer
Cast Members: 13 cast members, plus 3 swings.  With the exception of the four leads, everyone in the company plays multiple roles.  The company was originally led by John Lloyd Young (Frankie Valli - Broadway Debut), Christian Hoff (Tommy DeVito), J. Robert Spencer (Nick Massi), and Daniel Reichard (Bob Gaudio - Broadway Debut).  The rest of the company included what are now Broadway regulars, including Tituss Burgess (The Little Mermaid), Jennifer Naimo (Les Miserables (original run), Grease! (1994)), Mark Lotito (Victor/Victoria), and Donnie Kehr (The Who's Tommy).  Two cast members went on to play Frankie Valli - Michael Longoria and Dominic Nolfi.  And all four of the original "Four Seasons" - in the show, that is - have gone on to such shows as Glee (Young), Pal Joey (at least until injury felled him - Hoff), Candide and regular at Broadway Bares (Reichard), and next to normal (Tony nominee Spencer). 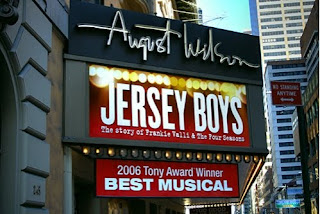 Awards:
THE STORY
Like both Buddy and Million Dollar Quartet, we go in knowing the story.  In this case it is the rise and fall (and eventual continuation) of Frankie Valli and the Four Seasons.  The story takes us from the days before they became a group, through the discovery of Valli, he of the unique falsetto sound, finding their own sound - glorious harmonies, clever, catchy lyrics - and from first record to worldwide pop music domination.  There is no disputing that theirs is the story of the American Dream and of rock 'n roll legend.  Their influence is still felt today. 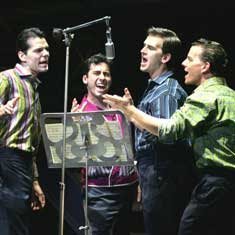 Unlike Buddy, this show benefits from depicting real life people, who, in real life are very interesting beyond the recording studio.  These Jersey goombas embrace all that goes with that title, including shady dealings and jail time, but their story is also that of brothers of sorts, of family, warts and all, love and fall out.  Framed by the alternately clever and obvious device of having each phase of their career being a season, all four of them, and directed with an earnest need to be slick and entertaining (Des McAnuff) and with their trademark choreography carefully re-created (plus some really snazzy stuff for the ensemble) by Sergio Trujillo, Jersey Boys moves.

THE CRITICS
Given the phenomenon the show has become - it continues to sell out on Broadway, plus there are at least two National Tours, including for a time a long sit down in Chicago - it might surprise some to find out that the reviews were not raves.  They were, on the whole, admiring of the show's slick presentation and especially of John Lloyd Young.  Some took issue with what felt like "manufactured dramatic tension" and others felt that there might be more substance.

Ben Brantley of The New York Times loved Young, deplored the audience's behavior ("they seem to have forgotten their age, where they are and the Mr. Young is not Frankie Valli").  He compares the book/story to a cross between Dreamgirls and Goodfellas, and says that compared to other jukebox musicals, this one is silver plated for stylish direction and the fact that the leads are actually singing and playing.  In short, it isn't as good as it could be ("Can't Take My Eyes Off Of You" is marked as the apex of the evening) and it isn't nearly as bad as it could have been. 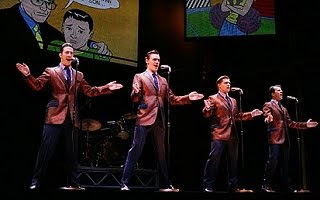 The original Chicago Company, with a glimpse of the set.
MY THOUGHTS
I rarely ever completely agree with Mr. Brantley, but in this case - a relatively straight-forward review devoid of malicious barbs - what he wrote was completely in my mind, too.  Almost word for word.  Scary.

Just as with Buddy and now with Million Dollar Quartet, I looked forward to Jersey Boys with excitement and high hopes.  I love the oldies and I love a potentially interesting story to go with them.  This one was chock full of possibility.  But all too soon, I was disappointed.  After you realize the format, you realize how rote the evening will be.  And it does not bode well when the opening number is a song you love ("Oh What a Night") sung entirely in French.  One of my two biggest gripes was the pandering to the lowest common denominator in the audience - the cast almost subliminally eggs on the audience to yell things out, to sing at full volume and completely forget everyone around them.  While that can be fun - the free for all Mamma Mia! curtain call is a load of fun - during the actual performance, let's leave the work to the actors.  I didn't pay $100+ to do the show for them.  But my biggest gripe - and one I fear will run rampant at Million Dollar Quartet is what I call "hit songus interruptus".  Just like the more famous "interruptus," just when things reach their frenzied climax, something or someone stops it cold.  Hit song after hit song starts, then stops, and most of the time ends unfinished in Jersey Boys.  It is maddening.  If you are going to use their music to tell their story, then use the f-ing music.  The only good thing about the start-stop is that it also stopped the audience sing-along.

Clearly, I am in the minority on Jersey Boys.  Frequently, friends ask me about it and I just smile and say, "You'll have to experience it for yourself."  And no one has come back to tell me thet didn't like it.  So I keep my mouth shut.  Except for on my own blog, of course.

So, next week, Million Dollar Quartet, will have opened, and I will have seen it.  But right now, as I write this weeks in advance, I am still hopeful that this newest oldies show will live up to its potential and be better than both of its musical relatives.