I was doing a little spring re-organizing this past weekend, though I didn't nearly as much finished as I had hoped to.  The chief reason is that I get distracted so easily.  Case in point:  I was dusting the bottom shelf of my bookcase - removing the books, dusting them, then the shelf, not that cursory dusting of just the shelf that I do most other weekends.  And I came across this great paperback that I hadn't opened in years (no letters about getting rid of old books, please!), and started thumbing through it.  Next thing I know, my butt and right leg are so mub they aren't even tingling.  It had been over an hour since the last time I even looked up at the clock!  Eh.  The dust'll be there next weekend, too.

The book in question is Making It on Broadway: Actors' Tales of Climbing to the Top by David Wiener (a theatrical lawyer!) and Jodie Langel (a Broadway/touring actress).  With a forward by Tony-winner Jason Alexander, and contributions from over 140 theatre actors, this book is an easy read.  Each chapter takes a look at a specific aspect of doing professional theatre, from college, to working odd jobs, to auditions, to making it, losing it, and lots of other things the rest of us with stars in our eyes never really think of.  Within each section, several actors talk about their expectations, dreams and the realities of working on a Broadway show, national touring company, or those periods where you aren't working at all.  It is generally very enlightening.  The stories seem to be stark truths, revelations, joys and disappointments.  All of them are short, and all of them are compelling.  It is also the kind of book that you can skip around and come back to time and time again. 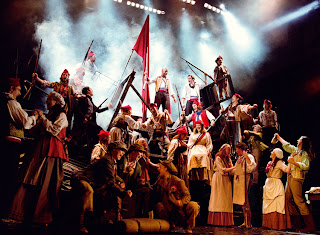 Is the ensemble singing?
Passing around M and Ms?
Or fondling each other?
Since the book came out in 2004, newer shows and tours aren't discussed, but it is neat to hear from actors who are a bigger deal now than they were then.  Subsequent editions would be nice, if for nothing else than to hear how their feelings may have changed or haven't.  Among the people quoted that are currently or recently on Broadway or on tour are: Roger Bart, Michael Berresse, Michael Berry, Sarah Uriarte Berry, Kerry Butler, Charlotte d'Amboise, Hunter Foster, Ruthie Henshall, Brian d'Arcy James, Marc Kudisch, Terrence Mann, Marin Mazzie, Idina Menzel, Donna Murphy, Faith Prince, Anthony Rapp, Alice Ripley, Emily Skinner, Barbara Walsh, and Karen Ziemba.  There are also some interesting perspectives from some real Brroadway legends like: Andrea McArdle, Chita Rivera, Ann Miller, Donna McKechnie, Colm Wilkinson and Lee Roy Reams.

Some of the more interesting sections include:


What strikes me most is how surprised they all seem when they make the realization that being in a show is a JOB, not play time.  And I love the actors who complain in one chapter about how unprofessionally people behave, then in another describe how they would bring on extra "props" to get people to break up during a performance.  Or the ones that are bitter about how some producers, especially conglomerates run a show like a business, then complain about things "that would never happen if I had a desk job!"  You can't have it both ways, kids.

But generally, even with all of the complaining, you can tell that even though their dreams are at odds with their realities, most of these people love what they do, and only grouse because they wish things were better.  (Side note to a certain replacement hyena: all that bitching about your "year from hell" in The Lion King really paid off, didn't it?  No one knows who you are, and you haven't worked since.)

I hope they update this book.  I'd love to hear what the community thinks about stage door stalkers, show "experts" and message boards on theatre websites...