That they have in common is interesting. They are all New York working girls: Fran is a waitress/hostess at a corporate restaurant, Charity is a hostess of another kind at a dance hall, and Paula is a retired-but-back-in-the game dancer/actress. As such, their digs all seem to be decent but not grand apartments in Manhattan

They all have similar dreams and nightmares: men. Poor Fran keeps getting mixed up with married men – executives at her company, which is a recipe for disaster, even at a time when office affairs were de rigueur, and even expected. But things never turn out well for the “other woman.” Then there is Charity, too naïve to fully understand what she is, and too sweet and needy not to be drawn to every single guy who shows her the least bit of attention. And Paula has been on the short end of the stick so many times, there is a name for her – The Goodbye Girl. Every time she’s ready to commit, he leaves town. 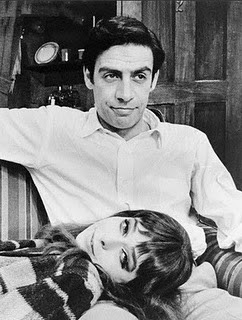 Jill O'Hara and Jerry Orbach
in the original Promises, Promises
On the other hand, all three have guys who are actually worthy of them; good matches who are as good as the girls themselves. Fran has Chuck, a nice guy who sees in her a nice girl, despite her affair with his boss. He embraces her quirks, and even rescues her from a suicide attempt. That he sticks around after that just goes to show the quality guy he is. Neither are without their warts, of course, but that is what makes them interesting. We are not sure how they will end up – they agree that “I’ll Never Fall in Love Again,” but there is reason to be optimistic as the curtain falls. 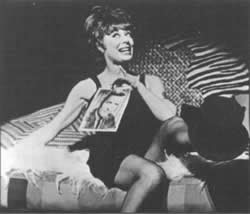 Gwen Verdon in Sweet Charity
Charity is literally trapped with Mr. Right – Oscar, man of many neuroses. Their hopes and fears are what draw them to each other, and boy do they have fun dates – a stuck Ferris wheel, a religion-of-the-week meeting under a bridge (or garage or nondescript seedy place, depending on which version you are most familiar with). Everything goes well, until Oscar just can’t come to terms with Charity’s job and assumed past. Charity is left high and dry, but stronger for the experience.

Tammy Minoff (Lucy),
Bernadette Peters (Paula) and
Martin Short (Elliott)
Then there is Paula, burned often and on the attack – let her hurt him before he can hurt her. Her latest lover has bid her goodbye, leaving her with no apartment and a young child in tow. Enter Elliott Grant, aspiring actor, who has sublet the apartment Paula must leave. Like oil and water, they immediately are at odds; the only thing that keeps them from killing each other is Lucy, Paula’s daughter. Of course, Lucy, like us, sees all of his charms and none of his faults, and it is obvious to all that they are made for each other. Cut to Paula and Elliott on the roof of the apartment building. He is wooing her like no one has since Romeo and Juliet, and she caves. Then he leaves. The Goodbye Girl again. Only this time, he comes back and she lives happily ever after.

Each ends up differently, but each is stronger for the experience. Add the patented Neil Simon zinger, plus the point of view of their perspective songwriters and directors – the urban-of-the-day Burt Bacharach and Hal David, plus Robert Moore and Michael Bennett for Promises, Promises, the brassy-sexy-edgy Dorothy Fields and Cy Coleman, plus Bob Fosse for Sweet Charity and the light show-bizzy-optimism of David Zippel and Marvin Hamlisch, plus the old school musical comedy-romance style of Michael Kidd for The Goodbye Girl – and it is really easy to see why these gals are among the most interesting, complicated and audience beloved of the mid to late 20th century musical theatre characters.


Comments?  Leave one here or email me at jkstheatrescene@yahoo.com.
Jeff
Posted by JK at 3:00 PM