Earlier this season, a rarely revived classic got better than decent reviews for its Encores! incarnation, so it got gussied up and opened on Broadway.  I'm talking, of course, about the critically-acclaimed, audience-ignored show Finian's Rainbow.  Featuring an awesome cast, including the three leads - Cheyenne Jackson, Jim Norton and Kate Baldwin - and an equally amazing supporting cast, including Tony winner Chuck Cooper, Tony nominee Christpher Fitzgerald, and crowd-pleaser Terri White.  It looked like a can't-miss production.  Looks can be deceiving, as the show lasted a disappointing 92 performances, closing near the end of January 2010.  But, the good news for fans (and even non-fans, like me), is that the producers saw fit to record the show.  As it turns out, the CD preserved some of the best parts, and is even better than the show itself. 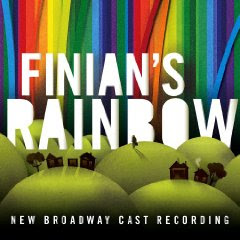 On the Show and Its Stars:  In my review, I wrote: "Finian's Rainbow [is] a decidedly old-school, old-fashioned show. Not that there is anything wrong with that, necessarily. But put a creaky old book (sooooo much exposition that things don't move forward until a full hour has gone by in an hour ten minute act one) together with community theatre level production values, and you get Broadway's first show downsized due to the economy, I'm guessing.  I can't really speak to any tinkering done between the original book (by Yip Harburg), the film version (by Fred Saidy) and the book adaptation (by Arthur Perlman). But whatever they did or didn't do, the book still plays like like it is a 40's musical, and still comes across as a poor man's Rodgers and Hammerstein crossed with an even poorer man's Lil Abner (if that's possible). I'm sure its bold in your face-ness about bigotry caused quite a stir back in the day, balanced only by the magical element which could always have given the creative team an out if necessary. And in two ways, Finian's Rainbow even comes across as a timeless classic: the bigotry theme is certainly relevant considering a black man (to use the show's vernacular) is in the White House, while a veritable rainbow of citizens is still fighting for equal rights; and the whole idea of wealth through credit is particularly resonant given our current economic state. So there are enough bones here to build an interesting, relevant revival out of a mediocre show. Instead, mediocrity rules the day. 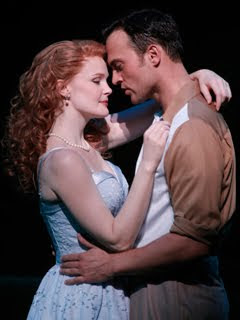 Kate Baldwin and Cheyenne Jackson
I am glad I saw it, because it was nice to see Cheyenne Jackson (Woody) playing a straight role (not versus gay, but meaning without camp) and the chemistry between he and Kate Baldwin (Sharon) was palpable even from the mid-mezzanine. Hers is a star-making performance. The third of the show’s leads, the titular Finian is played by Tony-winner Jim Norton. And he is a revelation. The role requires little in the way of singing, which handles nicely and more like an acting choice than with regard to “prettiness.” Norton is absolutely magnetic; he plays the show straight with the conviction of an actor who finally gets his shot at Hamlet. His performance has Tony nominee written all over it."  Unfortunately, because his role doesn't have much singing, you don't hear much from him, but what you do hear is first rate. 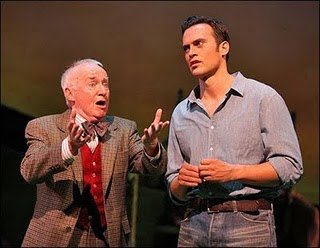 Jim Norton and Cheyenne Jackson
"Christopher Fitzgerald, as Og the leprechaun, is really not very funny in spite of the fact that he milks one cute joke til that cow is dry, all five or six times the script calls for it. He is somewhat better at the sight gags required of his role, and his knobby knees and gigantic calf muscles help add to the visual humor. Somewhat better, though largely because he is way better than the material, is Tony-winner Chuck Cooper, who plays the “black version” of a bigoted white Southern senator. Watching him work through the self-discovery and metamorphosis from jerk to open man is both hilarious and poignant.  The much lauded return to the stage by Terri White, is notable mostly because she makes a tiny part seem huge simply by mugging a few times in that sassy black woman way and by belting out a single verse of a single song like the whole of American Idol rested on those 20 seconds."  All three come out somewhat better on CD, mainly because you can't see what went with their persprctive numbers, especially "The Begat" which remains the most racist thing I think I have ever seen on stage in 30+ years of theatre going.

Likewise, you can't see the repetitive dancing, though the dance music is here in full length and include the ensemble making all the right noises as if they were actually performing.  Interestingly, they have much more energy here and a few under the breath side-comments made are hilarious.  Only the smarmy children are as smarmy without visual help as without.  And, fortunately, with the production photos and a little imagination you can fuse together a "what might have been" lavish production in your head. 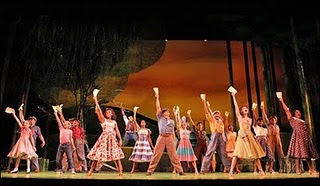 The Finian's Rainbow Company
On the Recording and the Stand Out Songs:  The recording is of first-rate quality.  The sound mix sounds like you are standing with the actors.  The orchestrations soumd more full and lush than they did in the theatre, much to Rob Berman's credit.

The same songs stand out here that did in the theatre, particularly "Old Devil Moon," which I play repeatedly.  Jackson and Baldwin sing it with grace, passion, romance and a clarity that is thrilling.  The dance numbers, as I mentioned, are actually fun to listen to, especially "That Great 'Come-and-Get-It' Day" and "Necessity."  Unfortunately, regardless of the quality of the recording, Mr. Fitzgerald's "Something Sort of Grand-ish" gets old very quickly and isn't half as charming as it thinks it is.

Still, considering how much I didn't care for the production itself, the CD represents the very best of the show and preserves several very fine performances.  I find myself pleasantly surprised that I have already played it dozens of times through which is easily more than twice what I thought I'd ever play it.