Don't forget to vote in this month's poll!  It closes at noon on Friday, April 30th!

WHAT YOU MIGHT HAVE MISSED THIS WEEK!
(And it was a lot!) 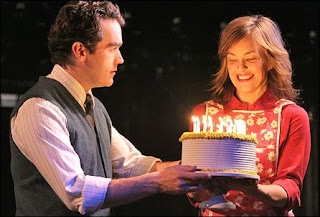 Brian d'Arcy James and Alice Ripley in next to normal
While it is always sad to say goodbye to a favorite actor in a show you love, it is always exciting to see who will be the replacement.  Well, in this week's high profile departure/arrival news, we have a return!  On May 16th, J. Robert Spencer will play his final performance as Dan, beleagured father, in next to normal.  On May 17th, Brian d'Arcy James will take over the role.  I wonder how different the show is now from when James departed it.  Now that his "family" - Alice Ripley, Jennifer Damiano,  and "new" son, Kyle Dean Massey are thoroughly deep into their roles, I wonder how he will fit.  Like a glove, I'm betting.  And now I have ANOTHER reason to see n2n again!

(Asa Somers has also rejoined the company - he played the doctors in the off-Broadway version - as an understudy to the roles he originated...) 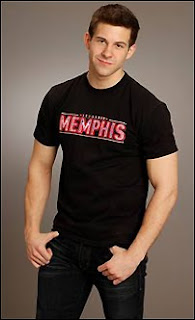 Charlie Williams - Mr. Memphis
The 4th Annual Broadway Beauty Pageant has been completed and this year's winner is Charlie Williams, Mr. Memphis.  This handsome guy is also one of the poster boys for Broadway Bares 20.  (A full "spread" on that is coming soon to this blog!).  The annual contest has some of the hottest guys currently onstage vying for the title through talent, interview, and, of course, bathing suit competitions.  All of the proceeds from this charity event go to the Ali Forney Center, which is a homeless shelter specifically for LGBT youth.

Other contestants included Wes Hart (Mr. West Side Story), Eddie Pendergraft (Mr. Wicked), Daniel Soto (Mr. Fela) and Rickey Tripp (Mr. In The Heights).  All of these guys, and their cause, are winners in my book!  But in case you needed more urging to finally go see Memphis, isn't Charlie a great reason to go??!!

Rickey Tripp and Eddie Pendergraft
THERE WILL BE MUSIC
This week, three Broadway-related CDs were announced.  Currently on sale is music inspired by Come Fly Away (or is it the other way around).  I think they should have recorded the actual Broadway band, not compiled them from somewhere else.  And it isn't even complete to the show!  (The best number, "Take Five", isn't on it, either!) 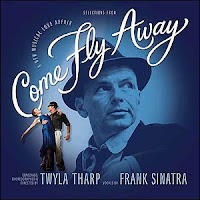 Then the track listing for Fela! due in June was released.  I haven't seen the show, but I do think it is cool that both male leads, who alternate, recorded it.  Apparently both versions will be available for download and at the theatre, but only one will be available in CD across the country.  Get your money ready, collectors!

And finally, they are going to record The Scottsboro Boys.  looks like a Broadway run is a sure thing now...

SPEAKING OF THAT
It worked for next to normal, so why not The Scottsboro Boys?  Both shows have controversial subject matter, traditionally better suited to off-Broadway, so both started there.  Both shows hooked up with great producers, with deep pockets, and faith in the material.  And both will have gone out of town for a "clean up try-out" - normal went to DC's Arena Theatre, and the Boys are going to Minneaoplis' Guthrie Theatre.  Next stop, Broadway!

BROADWAY BY NUMBERS
4: The number of days left in the 2009-2010 season.  Time sure flies!
1: The number of principals still attached to Spider-man: Turn Off the Dark.  His name is Reeve Carney. 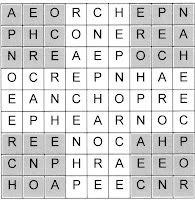 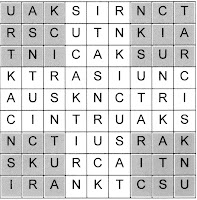 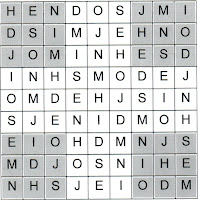 Look for more Broadway-themed puzzles soon!
Comments?  Leave one here or email me at jkstheatrescene@yahoo.com.
Jeff
Posted by JK at 12:01 PM