Tomorrow marks the first preview for the 2010 revival of La Cage aux Folles at the Longacre Theatre.  Normally, this would be when I would discuss the logo and print advertising for the new production.  But, in this case, I will let the people who actually made the decision do the talking.  You see, a few weeks ago, The New York Times did a feature on the genesis of the advertising for La Cage.  It is a pretty lengthy article, and it includes mock ups of several of the preliminary choices they narrowed it down to.  There is also an interactive feature that has the designer explaining each choice, what was learned from it, and how it is actually reflected in their final choice.

The 2010 Broadway Revival Logo
For the record, I think what they ended up with is the best choice.  It is evocative of the nightlife of the play, the pictures tease - both for those of us familiar with "Les Cagelles" and those who will experience them for the first time.  And the tagline is PRICELESS!  And, ultimately, it was the logo - I'm serious - that finally tipped me over the edge to buy a ticket.  OK, that, and the supporting cast casting. 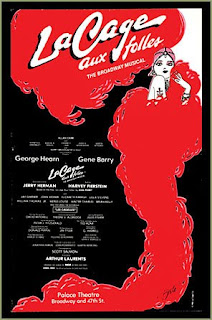 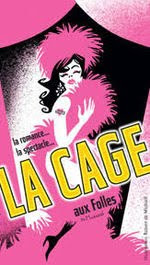 The 2004 Broadway Revival Logo
As I recall, I did not see the other revival specifically because I hated the logo, which felt like a cheap update of the original, which holds a very special place in my heart.  This revival purports to be a new take on the show.  So far the logo and advertising bears that out. 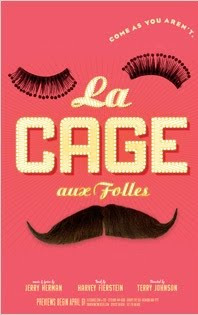 Also, for the record, if they didn't choose what they ended up with, I would have chosen the one above.
The New York Times article by Erik Piepenburg is HERE.  The interactive feature is HERE.
Comments?  Leave one here or email me at jkstheatrescene@yahoo.com
Jeff
Posted by JK at 12:02 PM