Best of the Decade: The Best Musicals, Part I

In selecting my absolute favorite theatrical experiences of the last ten years, I tried to keep in mind a quote that fellow blogger Ken Davenport quoted in his blog.  It is from an interview with Jordan Roth, head of the Jujamcyn Organization, who said, "The shows that change the world do it because they offer something you haven't seen before."  Davenport furthers the thought by adding, "But if you really want to be successful? Give us something that we don't even know we need . . . but once we get a taste of it, we can't get enough and don't know how we ever lived with out it."  And while those quotes are discussed in terms of marketing a Broadway show, their inherent truth for passionate theatre goers like myself is even more important.

Stats:  Opened: September 20, 2001.  Closed: January 18, 2004.  965 performances at The Henry Miller's Theatre.  10 Tony nominations, 3 wins.  Those three wins, Best Direction (John Rando), Best Book (Greg Kotsis) and Best Score (Music by Mark Hollman, Lyrics by Kotsis and Hollman) touched off a raging debate about just how come Thoroughly Modern Millie could be the Best Musical without the Best Book, Score or Direction.  Turns out it Millie tours better.  To be fair, I've seen several productions of each since then.
Why Top 15:  Well, it is extremely smart and witty.  Its references to musical theatre and the accompanying staging made it one of the few "self-aware" musicals that understood its own jokes.  I love a show that can entertain, touch the head and the heart and actually expects the audience to engage itself with the experience.  And the songs are prety darned catchy!  "Don't Be the Bunny," "The Cop Song," and the entire opening sequence are catchy, and always make me smile.  Then there is the cast, lead by John Cullum, Hunter Foster, Nancy Opel and Jennifer Laura Thompson.  From top to bottom this cast was a winner.  Spencer Kayden.... where have you been?  Come back! 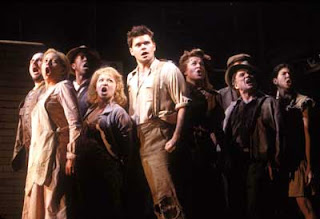 Hunter Foster and the Original Cast

Stats:  Opened: July 17, 2008  Closed: October 12, 2008  102 performances at the Lyceum Theatre.  One Tony nomination - Hunter Bell, Best Book.
Why Top 15:  Because those four people are each a part of me.  Because musical theatre is a passion, and because they had the drive to make it happen.  Because this is the most meta of the meta-musicals, and it works from the first note to the curtain call.  Because everyone has had a vampire in their life, and because these people faught theirs off.  Because it was like watching my own dream come true.  And because I have alot of the same Playbill covers.  Wanna trade Jeff or Hunter?  Again, heart, smart, engaging. 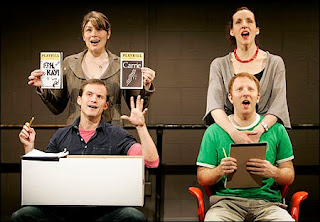 Stats:  Opened: November 13, 2008  Still running.  684 performances as of July 4, 2010 at the Imperial Theatre.  15 Tony nominations, 10 wins, including Best Musical.
Why Top 15:  Well, there are several reasons:  the story and its depiction of a bygone era that resonates today is profound and well-told.  The staging is exhilarating (for the most part), and it managed to have a stage full of little girls who didn't annoy the crap out of me.  But the performances of Greg Jbara, Hayden Gynne and my favorite Billy, Trent Kowalik made it a show I saw three times.  With a mostly new cast, I look forward to a return visit.  But you may be asking why it isn't higher on my list.  Two reasons:  the score is all over the place, most of it very nice, but it, like the other reason, the bi-polar direction hurt the show's focus.  Don't get me wrong, I loved the number "Expressing Yourself" by itself, but its break from the stirring reality was jarring in all the wrong ways.  Oddly enough, the way it was such a mess on the Tony Awards show that year points out the chief reason I love it desoite its flaws:  the staging and the show do everything a film (or television) can't do.  The show is best live and in the moment, just as the film is best in a dark room with a big screen. 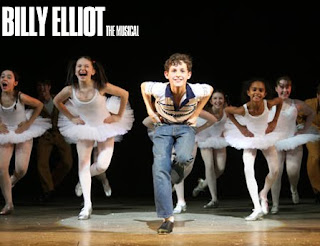 Stats: Opened April 18, 2005  Closed: July 2, 2006  504 performances at Lincoln Center's Vivian Beaumont Theatre.  11 Tony nominations, 6 wins, including Best Score by Adam Guettel, and Best Actress, Victoria Clark.
Why Top 15:  It is simple.  This is musical theatre as art.  Stunning to watch - all the tech Tonys were so well deserved as the show is perhaps the most beautiful of the whole decade.  Stunning to listen to, even when whole sections were in Italian.  And it is smart, has heart, and really makes you think.  Plus, it contains one of the best moments of the decade:  When Victoria Clark walks in on Kelli O'Hara and Matthew Morrison.  You gasped, you were shocked, and you immediately pitied all three for different reasons.  It was simply a beautiful show in every was a show can be. 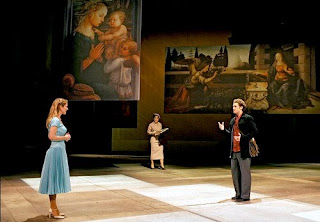 Stats:  Opened March 9, 2008  Still running  968 performances as of July 4, 2010 at the Richard Rodgers Theatre.  12 Tony nominations, 4 wins, including Best Musical.
Why Top 15:  This is a Cinderella story with the happiest of endings.  A new voice is being heard in Lin-Manuel Miranda, and it has a cast (even today) of some of the brightest, most committed stage acors/singers/dancers on Broadway.  The dancing by Andy Blankenbeuhler is amazing, exhilarating and it made me want to get up and join.  That it is about such a specific subculture of New Yourk City, and yet is so universal speaks volumes about the piece.  I laughed, I cried.  And man, did I want to dance!  It is just one of those shows whose entertainment value leaves you as high as a kite at the curatin call, but its themes, meaning and personal relationships stick with you months later.  Can't wait for the movie! 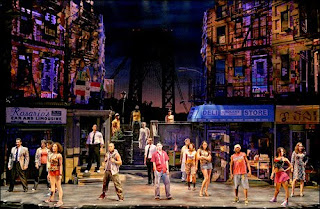 The Original Broadway Cast of In the Heights

Comments?  Leave one here or email me at jkstheatrescene@yahoo.com.
Jeff
Posted by JK at 10:01 PM