Trends of the Decade: Boys Will Be Boys

Well, the real trend during the 1st ten years of the 21st Century was the re-emergence of the Diva Performance.  (Click here to read that blog.)  But, as several of you wrote - and thank you for that, too - the boys didn't do too badly during these past ten seasons, either. And while I stand by my assertion that that the ladies made the bigger splash overall, here's to the boys of Broadway!

1.  Harvey Fierstein - A legend long before this decade, this actor, musical theatre star and playwright had a stellar first decade:  A Tony-winning turn as Edna Turnblad in Hairspray, a critically acclaimed run as Tevye in Fiddler on the Roof, and he wrote and co-starred in the much admired A Catered Affair. (Hairspray, Fiddler on the Roof, A Catered Affair and 2 Tony-winning revivals of La Cage aux Folles)

2.  Nathan Lane - One of the last of a dying breed, the true Broadway Star, he started the decade on a high note with The Producers, and ended on a less high note, but in a role that audiences love and fits him like a glove, Gomez in The Addams Family.  (The Man Who Came to Dinner, The Producers, The Odd Couple, November, Butley, The Frogs, The Addams Family)

3.  Dick Latessa - A Broadway career man whose onstage credits span decades, Latessa finally got the brass ring with his Tony-winning performance in Hairspray, and followed it with many New York appearances, ending the decade as the sweet doc next door in Promises, Promises. (Hairspray, Promises, Promises) 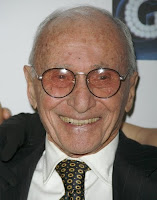 4.  Arthur Laurents - Outspoken, reviled and adored, Laurents has proven yet again that age has nothing to do with success.  Unhappy with revivals of his works (you should Google his opinions of BOTH La Cage revivals) he took the reins of his two biggest and made critical hits of both.  (Gypsy (Peters), Gypsy (LuPone), West Side Story) 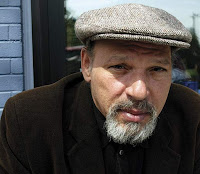 5.  August Wilson - The late great playwright git his 10 play cycle done just in time, with Radio Golf.  As controversial and salient in death as in life, his works are now being revived and re-examined by a variety of directors, including the controversial choice of Bartlet Sher as the first white director of a major production of a Wilson work, the critically acclaimed Joe Turner's Come and Gone.  In tribute, a Broadway theatre was renamed in his honor.  (King Hedley II, Gem of the Ocean, Radio Golf, revivals of Ma Rainey's Black Bottom, Joe Turner's Come and Gone, Fences)

Broadway Creators Who Came Into Their Own This Decade 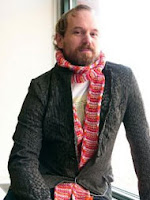 1.  Kevin Adams - (lighting designer): This guy is in the forefront of "green" lighting design, including Broadway's first musical done entirely in LED lights, next to normal.  This master artist with color and light is also responsible for the genius design of American Idiot, which earned him a much deserved Tony Award this past season.  And just look at his credits: A Class Act, Hedda Gabler, Sexaholix, An Almost Holy Picture, Take Me Out, The Good Body, Latinologues, Spring Awakening (Tony Award), The 39 Steps (Tony Award), Passing Strange, Hair (Tony nomination), next to normal (Tony nomination), American Idiot (Tony Award) and Everyday Rapture.

2. Hunter Bell and Jeff Bowen - (writers,composers, actors): Their little show debuted years ago off-Broadway and maintained interest for years until a Broadway production finally came to be.  Short lived, but critically and cult audience acclaimed it was.  A show about the birth of a show, [title of show]  was not only the quintessential backstage musical, it is also the last word in meta-musicals.  Here's looking forward to much more from these two.  PLEASE!  ([title of show])

3.  John Doyle - (director, designer, choreographer): This London import turned frugality as necessity into artistry.  He directed and designed the revival of Sweeney Todd into a hit run and a Tony winning endeavor.  His next effort was met in much the same way, with the revival of Company.  Critics and Sondheim agreed, he brought new meaning and urgency to two classics.  (And he brought us the lasting image of a tuba-toting Patti LuPone.)  His final effort of the first decade was the complex play/musical, A Catered Affair.

4.  Tom Kitt - (musical director, arranger and composer):  Talk about your ups and downs.  I don't think any one artist faced more triumphant highs and or despairing lows than Tom Kitt.  This decade brought him a couple of flops, 13 and High Fidelity, a marginal hit (so far) in American Idiot (talk about egregiously overlooked!), and a surprise, but solid hit musical, the Tony and Pulitzer Prize winning, next to normal. (An Evening with Mario Cantone, Urban Cowboy, Laugh Whore, High Fidelity, 13, next to normal, American Idiot, Everyday Rapture)

5.  Michael Mayer - (director, writer):  This guy has done much to advance and modernize the musical theatre art form.  His work on Spring Awakening was breath-taking and tragic in its simplicity, and his work on American Idiot was as breath-taking for its intensity and attention to detail.  And just look at the variety in his credits, just this decade: An Almost Holy Picture, Thoroughly Modern Millie (Tony nomination), After the Fall, 'night, Mother, Spring Awakening (Tony Award), American Idiot, Everyday Rapture). 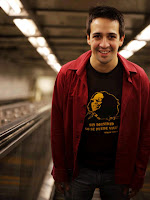 6.  Lin-Manuel Miranda - (writer, composer, actor):  Most people would consider getting the stamp of approval from Stephen Sondheim and Arthur Laurents to do Spanish translations for an all-time classic called West Side Story a career high.  But it would be hard not to consider that he actually did what many of us dream about - create, write and star in a completely original musical on Broadway.  Tony Awards, a long run on Broadway and a pending movie deal make In the Heights  one of the biggest hits of the decade, and all of it thanks to the seed of an idea tended to with care by Mr. Miranda.  Let's hope this young wunderkind has much more up his sleeve.  (In the Heights, West Side Story)

These Broadway Boys Flourished This Past Decade and Look to Be in it for the Long Haul: 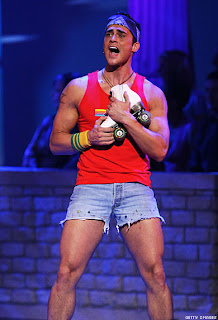 These Broadway Newbies Have Potential...If They Keep Coming Back: 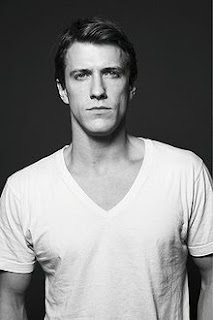 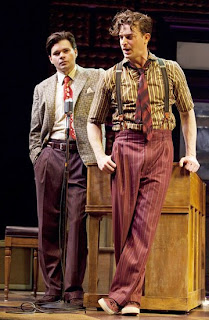 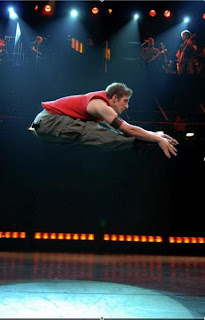 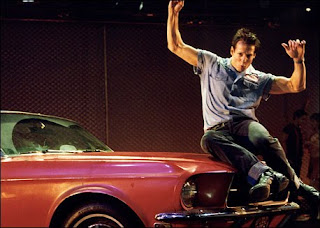 ... and Long Term Broadway Boy John Selya
Putting on the "Eddie" Moves in Movin' Out
These Are Tried and True Broadway Career Men: 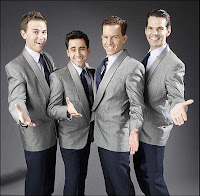 5.  The Jersey Boys: The show wasn't my cup of tea, but there was no doubting that these guys were singing, dancing and acting their asses off: Christian Hoff, J. Robert Spencer, Daniel Reichard and John Lloyd Young made being a pop star look easy.

4.  Raul Esparza as Robert in Company:  I still think he should have one the Tony for this intense, emotional performance.  Of curse, every time he's nominated, I think he should win.  He's THAT good.

3.  Nathan Lane as Max in The Producers:  Again, the show was not my cup of tea, but Nathan Lane was pretty spectacular in this role of a lifetime.  Others came after him, but none really came close. 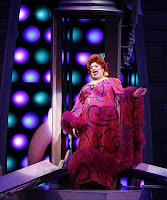 2.  Harvey Fierstein as Edna in Hairspray:  The gravelly voice, the loss of eyebrows and comedic timing that is virtually unparalleled conspired to make this man as woman really work.  She was one hell of a mother. 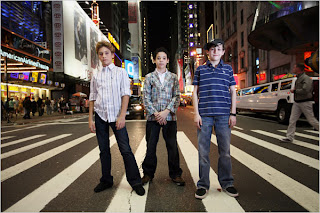 1.  Trent Kowalik, Kiril Kulish and David Alvarez as Billy in Billy Elliot: Never before and probably never since has a show so rested on such little shoulders.  These triple threats have set the bar high for future Billys.  Best of all each made the role their own, and each deserved their Tony win.  It will be interesting to see which, if any return in another show.  I hope all three do so.


Comments?  Leave one here or email me at jkstheatrescene@yahoo.com.
Jeff
Posted by JK at 2:01 PM