The current poll will be off on July 15 - so vote today!  And come back after the 15th to vote on the next all-American poll!


BOY, DID I LEARN MY LESSON!

Thank you to all of you who have taken the time to write about my opinion of Taylor Hicks.  Apparently, a lot of you disagree.  I think that is one of the great things about an outlet like this blog.  We are free to have differing opinions and openly discuss why.


One reader, Ivette P., asked why I thought he "messed up".  Well, that is a good, valid question and one that points up the fact that live theatre differs at every performance.  I can only (and have only) discuss the performance I saw.  And what I have described - audience frenzy at the start, light applause and a few boos at the end - is accurate as to what I saw.  Perhaps all of those storied hours spent promoting the show on radio and TV in every city, plus most nights out clubbing and concerting caught up with him.  The guy had an off night, and I saw it.  End of story.
But I do take exception, even though I published it, to the comment that says I lied.  I did no such thing.  I expressed an opinion backed up with facts.  And the fact is that to date, he is the least successful Idol winner, in terms of record sales (not including Kris Allen, whose record remains on the chart, but hasn't been out long enough to compare).  And I also think that Mr. Hicks got the deal of the century if they actually paid him $3.5M for the Grease Tour.  Of course, the whole show probably didn't cost that much to mount, but I can't verify either figure.  Perhaps the real issue is that as far as Grease goes, that production, overall, was lacking.  And that night was a particularly bad performance of it.  But one also has to wonder, with all of that legendary promotion of his new CD and less than 50,000 copies were sold, was it worth it?  Apparently so, to all of his Idol fans.  Mr. Hicks, congratulations on being a rich man with very, very ardent fans.
The funny thing is, I thought I'd get all kinds of letters and responses about who I left off my Divas of the Decade list.  Who knew that one crummy sentence in a blog about American Idol would cause such a stir?  Lesson learned.

LOOK OUT!  MORE OSCAR WINNERS ARE ON STAGE! 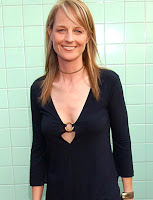 This week, one of my favorite actresses, Helen Hunt joined the cast of Our Town as the Stage Manager.  Pretty cool, and modern thinking.  I have just added it to my list of must-see shows.  But I am going to see her because she has regularly appeared onstage, not just in movies and TV.  And I'm going to see her because of the most important reason: she is a very good actress.


Another Oscar winner, and frequent Broadway Baby, Whoopi Goldberg was announced to be taking over the role of The Mother Superior in her production of Sister Act: The Musical in London.  Could this be a warm up for a limited enagement down the road on Broadway, when the show comes in later this season, directed by Jerry Zaks?  I'm sure she could squeeze it in even with her The View duties.  You gotta love Whoopi.  She promotes and returns to Broadway regularly, and with Sister Act, she also put her money where her mouth is!  Brava!

Hope Davis
I guess I can't complain that a TV series about producing a Broadway show is actually going to have Broadway stars in it.  Had they cast all TV and movie actors, I'd probably be pretty ticked.  So I guess I'll be happy to get my LuPone where I can, even if it means subscribing to HBO to do it.  The show is called "Miraculous Year", written by Red Tony-winning playwright, John Logan, and it will star Tony winners Patti LuPone, Frank Langella, Eddie Redmayne and Norbert Leo Butz, plus Tony nominees Hope Davis and Stark Sands.

Eddie Redmayne
Of course, this is just a pilot, but it also puts into question proposed casting for two upcoming shows, as Ms. LuPone has been reportedly attached to Women on the Verge of a Nervous Breakdown,  while Mr. Butz is certainly attached to Catch Me If You Can.  Then, too, since the show is about Broadway, maybe it will actually be filmed in New York, allowing them to do both.

Stark Sands
With the announcement of Mr. Sands being attached to this project, and Joshua Henry taking the lead in The Scottsboro Boys, one has to wonder about how much longer American Idiot will be around.

SO LONG, FOR NOW

Nixon and Henry
Man, it must stink to be Brandon Victor Nixon.  First he earns raves in The Scottsboro Boys, but leaves that show to star as Ray Charles in the bio-musical, Unchain My Heart.  Then his replacement, Joshua Henry, announced for Scottsboro, and Unchained gets postponed for a year.  Too bad he couldn't have done both. 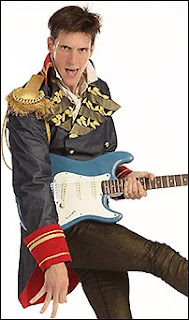 Colin Campbell McAdoo
You gotta love the folks at Theatreworks USA, who have begun an off-Broadway run of their new show We the People: America Rocks! a contemporary musical that brings major figures like John Adams and George Washington to life.  What makes it even better is that it is FREE!  That's right. The tickets cost $0.00 dollars.  The show is at the Lucille Lortel Theatre and runs through August 13.  A great opportunity to get the kids to a live show, and learn a little something.  Of course, if George Washington really looked like Colin Campbell McAdoo, I'd probably have done a lot better in American History!


Comments?  Leave one here or email me at jkstheatrescene@yahoo.com.
Jeff
Posted by JK at 1:35 PM