Trends of the Decade: Hollywood vs Broadway

This trend has been going on as long as there has been a "Broadway" and a "Hollywood."  But in recent years, it has really become pronounced.  That is high-profile movie stars are making big, splashy Broadway debuts, do the run in a limited engagement (12 - 16 weeks on average), make the money for the producers, talk about the prestige and not the money for doing Broadway, and then leave town feeling validated as an actor.  Things really came to a head just this past season when several of the major Tony nominations and eventual wins went to actors who are known primarily for being screen stars in shows that would be closing very shortly after the awards were handed out.  Some in the community have even rallied to have some sort of rule put into place to prevent "movie stars" from taking awards from "Broadway actors."  That debate is really for another blog entirely. 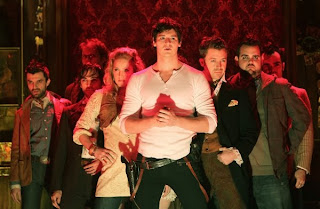 Our new Broadway Hero: Benjamin Walker (center)
in Bloody Bloody Andrew Jackson
And it does not seem to be abating anytime soon.  Just this week, high-profile movie stars Halle Berry, Samuel L. Jackson, Will Smith and Jada Pinkett-Smith were announced for imminent projects coming to Broadway.  Of course, there is the ultimate counter to that in young Benjamin Walker, a relative unknown, who might have lost his big movie break by declining a role in the next X-Men movie, so that he could star in the Broadway opening of Blood Bloody Andrew Jackson, a project he has been attached to for years.  Good for him for being loyal and seeing things through, right?  And no one seems to be protesting two film stars, Oscar nominee (and Tony winner) James Earl Jones and Oscar winner (and Tony winner) Vanessa Redgrave, who will be starring in a limited-engagement of Driving Miss Daisy.  Perhaps the difference is that they are perceived as BOTH film and stage stars by their perspective camps. 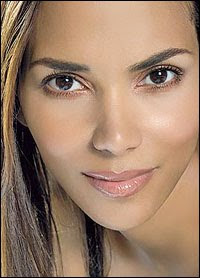 Oscar winner Halle Berry
may be Broadway bound
So, I looked over the openings of the first decade of the 21st Century, and made a few lists (none of which, I'm sure, are complete) to see just how much this trend is a trend and to see if the Broadway acting commuinty has a legitimate gripe (in terms of jobs versus awards, which I won't get into, except to say this: if you are doing this just to win awards, find another job).  I made a list of Broadway one-timers, a list of actors known to the public at large for their TV/film careers, but do Broadway regularly, and a list of actors who are thought of first as Broadway folk, but have managed a decent career in TV/film. 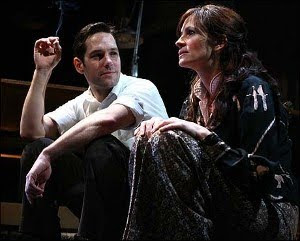 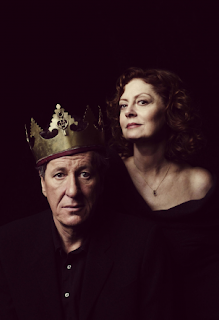 Movie stars of Broadway's
Exit the King: Rush and Sarandon 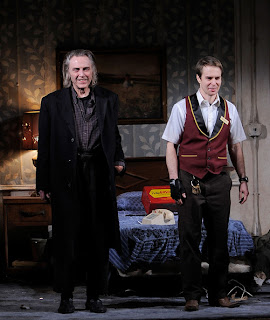 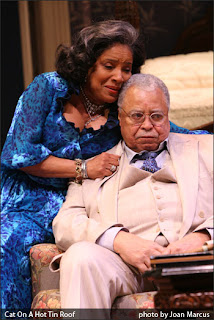 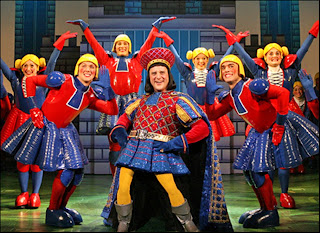 Christopher Sieber does a lot of Broadway, like Shrek: The Musical... 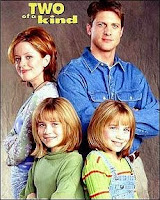 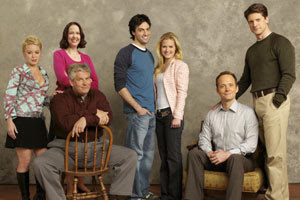 ... and has also starred in two TV series, Two of a Kind and It's All Relative
(along with Broadway's Harriet Harris and John Benjamin Hickey)
Granted, I am sure I missed a few from this decade, but of that top list only 3 have won Tonys, and the bottom two lists are virtually even.  I wonder how much anyone has to complain about.  Still, these high-profile limited engagement things seem to becoming more of a norm, so I can understand where everyone is coming from.  And it is a double edged sword - while it does bring people to Broadway who might otherwise not come, and might make them come back for other shows, it still limits the number of people who can see these stars, and as Fences showed us, it can drive up ticket prices.

In the long run, my money is on the folks who can sustain a respectable career, be it on Broadway alone or on Broadway with TV and film thrown in between Broadway gigs.