Best of the Decade: The Best Musicals, #4

The 2003 season was one of my favorites, with its two biggest hits making my top 5. Hairspray was the quintessential traditional Broadway musical (with a twist or two), while number 4, Movin’ Out, was everything Hairspray wasn’t. Entertaining, thought-provoking, and enjoyable, both shows had what a lot of more recent shows don’t. So, why is the Tony winning Best Musical just below the runner up? Because to this day, something will remind me of this dance musical and I am as enthralled by I now as I was then.

To date, Twyla Tharp’s biggest hit and most acclaimed musical is Movin’ Out. Here is a look at that show. 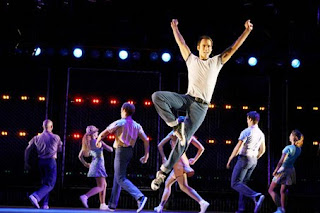 Over the run of the show**, there were:
** - NOT including return engagements, understudies, swings or stand-bys. 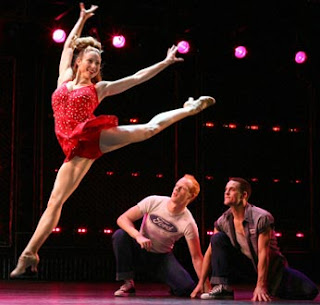 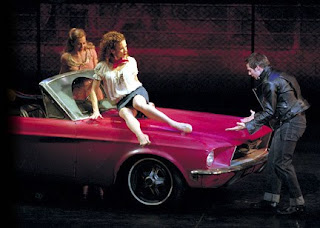 My Favorite Moments in Movin’ Out:

When I blogged earlier about Movin’ Out just as Tharp’s latest show, Come Fly Away, was about to open (click here for that article), I summed up my feelings thusly:

I love to watch excellent dancers perform excellent choreography (my thoughts on West Side Story corroborate that) and Movin' Out provided me with hours of such pleasure. I saw it three times on Broadway and several times on tour. It speaks to the quality of the piece, the director and the dancers that each time the show got richer and deeper, just the opposite of what happens to many long-running shows that become a parody of themselves. I sat in stunned silence the first time I saw it, and wept openly at Judy’s anguish, which closed act one, and wept yet again at the flashback sequences in act two that showed us what happened in Vietnam. As I type this all these years later, the goose bumps are fresh at just remembering the penetrating throb that went through my body as the sound of helicopters approached, hovered and finally left, an aural symbol of tat bloody conflict. I loved every single minute of it, even embracing the sweet, if unlikely ending.

The show has continued to tour the country, with 2 Equity National Tours and now with a non-equity tour. Most of its principal dancers have continued with Ms. Tharp in her subsequent shows, The Times They Are A-Changin’ and Come Fly Away.

Comments? Leave one here or email me at jkstheatrescene. Or send me a question at http://www.formspring.me/ and look me up as "jkstheatrescene" or "Jeff Kyler." Go ahead! Follow me!
Jeff
Posted by JK at 6:00 PM

Labels: Best of the Decade, Movin Out, Twyla Tharp