When the Show Goes On, But the Star Doesn't

Recently, fellow blogger and friend, Esther of Gratuitous Violins, posted a blog (click here to read her full explanation, and several responses) explaining her disappointment in a system where she found out well in advance that Kelsey Grammer would be out of La Cage aux Folles the night she would be attending, and was not informed of such by Telecharge. I will leave it to you to read her blog, but I thought I’d talk a bit about that subject here.

It is always a risk, of course, with live theatre that the cast members may, for whatever reason, be out for a given performance. It is particularly regrettable when the performance has been critically acclaimed and/or award-winning. And it is even worse when it is someone of a certain status that would make missing said actor a long-term disappointment. No offense to their understudies, but I’d feel extremely disappointed if Angela Lansbury or Bernadette Peters or Patti LuPone were out when I had a ticket. So I can totally understand Esther’s disappointment about Mr. Grammer (especially since I think his is the performance that makes the show, not the odd Douglas Hodge, who only impresses me in Act Two).

All of that said, I have over the years encountered the upset of understudies, and so far, I haven’t been disappointed, and in most cases leave the theatre thinking, “is so-and-so really that much better?”, and in one case, I actually preferred the understudy.

In previous blogs I’ve mentioned some of these folks, so please forgive the repetition!

I have managed to miss Gavin Creel in both shows I went to see him in specifically! That’s right, I saw his understudy - a young guy named Brandon Wardell - in Thoroughly Modern Millie, and Mr. Wardell was terrific. But my most pleasant surprise was during one of the first previews of Hair, when his understudy took the stage for the very first time - and apparently before he ever had a put-in rehearsal. That young man, Jay Armstrong Johnson, was superb. Do I regret missing Creel’s Tony-nominated performance? Sure. But I am really glad I saw this great new talent, and with a cast extra energized and pulling for him! 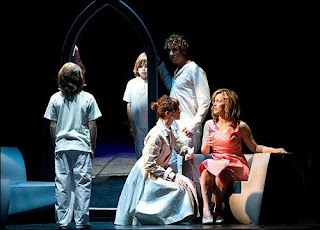 Alice Ripley in a Hollywood revival of Tommy, as Mrs. Walker
Back in the 90’s, shortly after it opened, Marcia Mitzman began to miss performances in The Who’s Tommy. The matinee I attended was one of them, and the understudy was so new to it that they had to hand us slips with her name on them; they weren’t even inserted in the Playbill! Sure, she seemed a touch young for the part to look at her, but the minute she opened her mouth, she WAS Mrs. Walker! Her name was Alice Ripley and the rest is history.

Interestingly, this past year, I went to the city to specifically see Kyle Dean Massey in next to normal, who at that point, was just a temporary replacement for Aaron Tveit, so the urgency was there. It turned out even better than I thought, though, when I saw that Alice Ripley would be out and Jessica Phillips (left) would be on. I was crushed, as I loved Ripley’s performance. So I texted a good friend and complained, and he convinced me to stay, reminding me that Ms. Phillips could turn out to be a great new discovery, and that they wouldn’t hire just anyone to cover a Tony-winner. And besides, I was there for Mr. Massey. So I sucked it up and went in. I’ve never been so glad I stuck with it. Ms. Phillips was mesmerizing, and played the role so well and so differently. I was moved, as with Alice, but in a much different way. I got to meet her after the show, and I told her how glad I was to have seen her. The look on her face made it all worth it.

Esther is going to see Christopher Hoch (at the top of this blog) as Georges in La Cage, and he was another of my understudy “finds.” I am a huge Christopher Sieber fan - I’ve never missed a show he was in, until this one. And aside from really wanting to see Sutton Foster in Shrek: The Musical, Mr. Sieber was the draw for me. So, I was terribly disappointed to find that nasty little white square of paper in my Playbill announcing that “at this performance…” Sieber was out and Hoch was in. You know what? He is a great actor/singer! And the audience ate him up. Glad I saw him, too!

And so, the show must go on, even if the star doesn’t. Most of the time, it has been a great experience for this theatre-goer.

Comments?  Leave one here or email me at jkstheatrescene@yahoo.com.
Jeff
Posted by JK at 6:33 PM