One of the things I love about a Broadway musical is a thrilling overture and/or big opening number.  They can really get a show going.  Another thing I love about a Broadway musical is the "star entrance."  You have to know what I mean!  That moment designed to garner applause for the guy or gal you are there to see.  Usually, it is the star, sometimes it is the character, but no matter, you know you are supposed to applaud.  Of course, in a way it is even more noticeable when said star is out and the understudy is on (generally speaking).

Here are some of my absolute favorite star entrances:

Shrek: The Musical: For a show that I really didn't care for, it had TWO such entrances... one, I think more for the character than the actor, and one just then opposite.  No offense to Brian D'Arcy James, but when Shrek comes bursting out of his outhouse and we see the green guy for the first time all grown up, it gets applause.  On the other hand, we get to see grown up Princess Fiona after a pause in the song, when a teenaged Fiona circles around the back of her tower, and a full grown Sutton Foster comes around the other side.  The music vamps until the applause dies down. 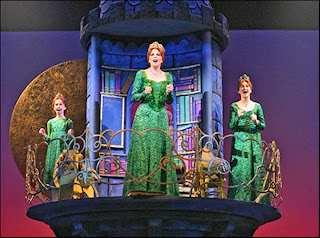 RENT: Whoever gets to play Maureen gets a hell of an entrance in RENT.  The character is mentioned, discussed and sung about well before we ever see her, and she comes in, on a "motorcycle" no less at the crescendo of a huge production number!  Pretty cool, and it was as cool when Idina Menzel was a nobody, and for every "Maureen" after. 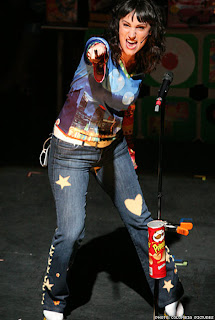 Grand Hotel: The Musical: Talk about your "Grand" entrances.  The entire main cast is introduced as they enter the hotel through the revolving door by the narrator/Doctor.  To make it even more interesting, the Doctor himself makes a spectacular entrance.  During a series of three angry crescendos from the orchestra, the Doctor storms through the door, limps angrily to his chair stage right, sits down and gives himself an injection of morphine! (Below, from the 1990 Tony Awards, Kathleen Turner does the introductions, plus  "We'll Take a Glass Together," one of the greatest musical numbers ever.)

Xanadu:  A show of extremes had star entrances at both ends of the spectrum, and really gave the whole cast a great way to take the stage.  First, Sonny (Cheyenne Jackson) just meanders on stage and begins drawing his muse mural.  The audience is silent, watching him, until he is ready to address the audience!  Then, during the opening number, "I'm Alive," the mural comes to life, via a cool projection and a well-placed trap door/elevator, which brings up groups of muses, ending with Kira (Kerry Butler). 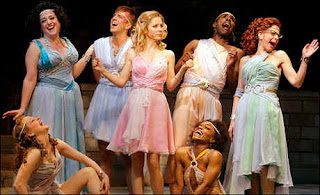 Hello, Dolly!:  Sure, we've seen Dolly Levi for almost every scene up to this point, but she (Carol Channing) gets to make one hell of an entrance during the title number, when she arrives at the top of the stairs at Harmonia Gardens in the amazing red dress. 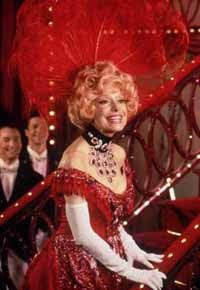 Promises, Promises:  Star Sean Hayes gets an interesting entrance, one that thankfully gets applause (both times I saw it, anyway).  The overture starts, and the scrim is back lit to reveal Mr. Hayes working at his desk center stage, while executives and secretaries dance around and all over him.  He never misses a beat, stapling and stamping and adding and eating lunch to every punctuating beat of that show's awesome overture.

The Addams Family:  Say what you want about the show, but between the awesome overture and the grand entrance of the titular family, this show starts off with a one two snap!  First you get the strains of the famous theme song, followed by a jazzy and intense overture, which culminates in the grand drape parting to reveal the Addams' in pose.  The crowd goes wild! 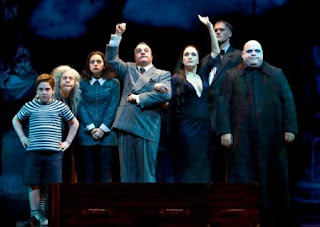 Hairspray:  This one has the most subtle of star entrances, first with Tracy (Marissa Jaret Winokur) "lying" in bed.  The angle is so jarring and funny, you don't even realize the leading lady has made her entrance!  Then, when Edna (Harvey Fierstein) takes the stage, it is from a trucked in piece of scenery, with her standing behind an ironing board, holding up a piece of laundry in front of her face until it is dropped at just the right moment to reveal our star. 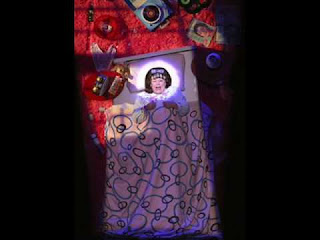 And here is the entrance that got me into this whole Broadway thing in the first place:

Mame:  I'll never forget it... the backdrop of the Brooklyn Bridge/Manhattan skyline circa the roaring 20's goes up to reveal a nearly empty stage, save for some exotically dressed people all in poses.  The scenery slides in (not a stage hand in sight!) and Mame's fabulous apartment takes shape.  The jazzy horns that begin "It's Today" start, including a long bugle vamp.  Mame (Angela Lansbury) comes into view at the top of an enormous spiral staricase, blowing a bugle.  APPL:AUSE!  Then, "playing" the bugle, she slides down the spiral bannister!  (I'm sure it was stage magic, but it was really something to a 17 year old at his first Broadway show in 1983.  I mean, scenery without people moving it???  Angela who? 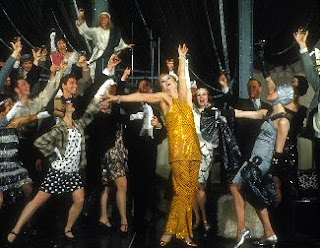 Do you have a favorite star entrance?  Tell me about it here or email me at jkstheatrescener@yahoo.com.
Jeff
Posted by JK at 11:38 PM