DON'T FORGET TO VOTE IN THE POLL TO YOUR RIGHT!  IT CLOSES SOON!

A special thank you to Tina C. from New Jersey for not making me feel stupid for missing the obvious!  She suggested the following:

Awesome, Tina!  And thanks again for being apart of my blog! 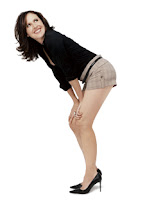 THE PROMISES OF GREAT CASTING - SUPERSTAR!

Is anyone else as excited as I am that Molly Shannon is going to replace Katie Finneran inPromises, Promises?  The woman is hysterical, and perfect for this small role.  (A little Molly can go a long way...)  And we already know she has chemistry with Sean Hayes - she was an excellent guest star on Will and Grace.  Here's hoping when she's through, we can see a little more of her on Glee!

THIS SISTER IS A CLASS ACT

Say what you want about Whoopi Goldberg, but when she commits to something she commits!  You might have heard that she took over the role of Mother Superior in the London version of her (she's a producer) Sister Act, but had to leave suddenly to look after her ill mother.  How many other celebrities honor their commitment after a crisis like that?  Damn few!  That's right, Whoopi arranged to come back for 5 performances before the show closes.  And even more graciously, is rotating in the role with the actress who was chosen to close the show so she won't miss out, either!

Sister Act  is Broadway-bound.  Let's hope the show is half as classy as its producer.

Citing technical transition issues, the musical Women on the Verge of a Nervous Breakdown, delayed previews by three days, and will now begin on October 5th.  In the mean time, here's another couple of fun promo pics! 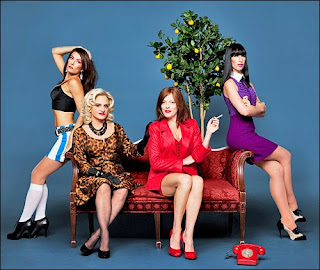 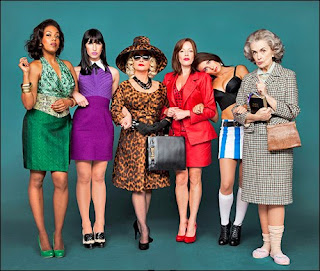 These ladies are DEFINITELY
on the verge of something!
WONDERLAND AT THE MARQUIS

Just how big is Frank Wildhorn's Wonderland that it is getting one of Broadway's most prime pieces of real estate, the Marquis Theatre?  You could have knocked me over with a feather when I read that.  Something tells me that my guess, Priscilla: Queen of the Desert will either go into the Al Hirschfeld after Elf leaves or it will get the Palace (how fitting for a queen!) when West Side Story either closes or moves to a smaller house.  Of course, the Nederlander and or the St. James may be both big enough and up for grabs for a spring opening of Priscilla.

Here are the answers to the Broadway Picto-grams Game.  If you want to play before you read the answers, click HERE. 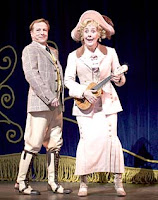