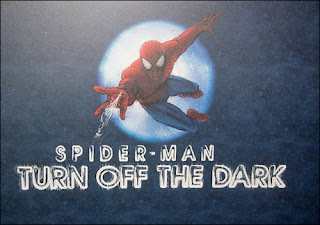 Perhaps the biggest Broadway news of the week was the Good Morning, America debut of both star and song from Spider-Man: Turn Off the Dark. Yes, Reeve Carney with his band debuted a new song, "Boy Falling from the Sky," from the forthcoming musical. A few comments, if you please.

The Performer and the Performance 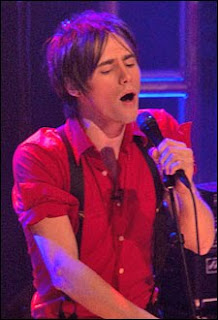 Already in Trouble?  Give us all a break!
I've already read where people have written off the show based on less than 4 minutes and zero theatrical context. And I've read about the people that "refuse to see it" because it is a "disgusting waste of money during a time of global economic crisis." You could say that about money spent on anything other than food, clothing and medicine. It isn't your money that's footing the bill. Sure, you contribute to returning that money to investors when you purchase a ticket, and it is certainly your choice not to go. But let's not condemn the entire enterprise because you have issue with its budget. Think about that the next time you order at Starbucks. Couldn't that $5 be better spent rebuilding New Orleans or building a new homeless shelter? Free medicine for the elderly?  Research to cure cancer, AIDS, and any other troubling disease?  Sure it can. 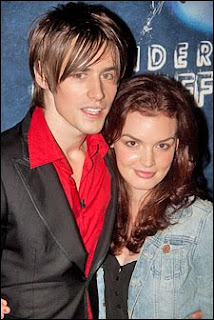 Peter and MJ:
Reeve Carney and Jennifer Damiano
The show's pre-opening troubles are a matter of public record.  From notorious trouble raising money, coupled with casting issues due to timing, publicly changing advertising agencies, and design delays, getting the ball even rolling has been a problem.  Hundreds of Broadway shows have gone through this and worse, but none in this age of Tweets, email blasts, Facebook and even blogs like mine.  But stop and think about it: how does anyone who isn't actually in the rehearsal hall know if the show is "in trouble"? Really. I'm sorry, but I just don't believe that rehearsals for this show are so open that anyone not directly involved could really know. The "I heard from my best friend who once sat across the aisle from Jennifer Damiano on the A Train and is now her best friend on Twitter" mentality of truth is destructive and unnecessary.

How about we let it start previewing, fix itself up and open before we already decide we hate it, huh?   How about we focus our energy on celebrating the fact that even in these tough times, new, exciting and daring shows are still opening and filling our hearts and souls with artistic nourishment?

I have always said that even if I personally hate a show, I wish everyone involved nothing but the best and long runs and happiness.  You all know my general disdain for Jersey Boys and Million Dollar Quartet, but I am thrilled that they are enjoying some success and are keeping hundreds of talented people employed.  How it turns out as far as Spider-Man goes remains to be seen.  But whether I like it or not, I wish all of them nothing but the best.

Comments?  Let me have it!  You know where.  (Only coherent, well-explained comments will be posted for this particular blog.)
Jeff
2.13
Posted by JK at 12:01 PM