From Ireland to Broadway and Back Again: 1916: The Musical

A few days ago I was contacted by the press agent for a new musical in the UK.  She was very complimentary about this blog and the quality of the comments that all of you leave.  And so she thought we might be able to help her out.  They have a website, a Facebook group and a brief video (below).  First, here is the press release I was sent, their words in BLUE: 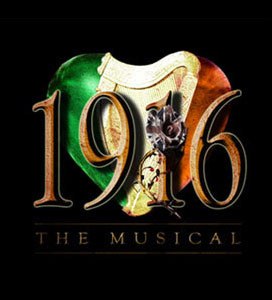 1916 is a new sung-through, epic musical on the scale of Les Miserables and Miss Saigon. It is a love story set in Dublin during the Easter Rising of the same year. At its heart lies a relationship between a beautiful girl who falls in love with a British Soldier, but whose brother is a determined Republican. As the events of battle ensue this love triangle is tested to breaking point in both directions.

The original concept has been developed by Sean Ferris over the last three years. Over the last two years the writing team of Simon Humphreys, David Christmas and Stuart Hancock have now completed 70% of the libretto and score which is now in workshops in London and will complete by December this year.


This work is so good that Abbey Road Studios in London agreed to support us and we have just completed recording and mastering the concept album at their studios, which contains eight key songs from the show. We have also been offered a worldwide distribution contract for the original cast album by EMI Records. 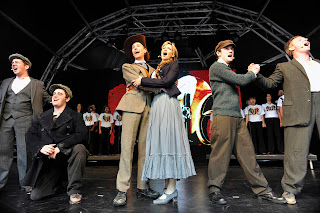 In July this year we were invited to perform a half hour segment at the theatrical showcase event “West End Live” in Leicester Square. This was an unprecedented invitation as all other performances over the weekend were from existing and well known London shows. As a direct result of this we have been asked for a fuller length performance to be staged in Trafalgar Square next year as part of the St Patrick’s Day celebrations.  We will also be performing a set from the current workshops at The London Irish Centre in December this year for interested investors, coproducers and broadcasters.


It had been our original intention to open this show in Dublin, however following discussions in Ireland with, amongst others, the President of the Hibernian Society, The Arts Council and Sinn Fein’s leader Martin McGuiness, we have been advised to open in Boston in April 2012, on the 96th anniversary of the Rising, from where the show will transfer to Broadway, London and return to Dublin for the Centenary itself in 2016.

Mr McGuiness described the work as “inspirational” and we are now in discussions with the Irish Governments on both sides of the border to make this the centrepiece of the Centenary celebrations. 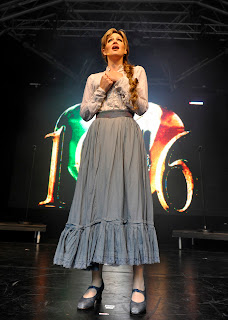 While the work does have political threads by its very nature, this is not a revolutionary, anti-British piece, indeed quite the opposite is true. It tells the story of hungry people who overthrow their oppressive masters, but the history contributes greatly to the healing and reconciliation process begun by the Good Friday Agreement. It will change a generation’s perceptions about we know as “The Troubles”. Its subject matter and portrayal are not about violence, bombings and sectarian killings. This is a story of real people who drew up a charter for freedom and the right to peace.

Every member of the team to date has worked on this project as a volunteer, including the creative team, producers and musicians. We have had some notable volunteers including Paul Monahan, formerly The Phantom Of The Opera and The Bishop of Digne is Les Mis, and our Bridie has been chosen by Sir Cameron Mackintosh to play Eponine in his 25th anniversary production of the show. We are now in the process of raising the necessary funding for launch.


On the broadcast side, we have been approached by a US TV production company with a view to them securing the rights for a network TV show in the USA, covering the opening, and we are filming for a documentary series as well to coincide with the Centenary.


There is a fantastic story to tell here, not just the historical side of it, but also about the phenomenal impetus this has achieved in such a short time and the unbelievable collaboration of writers and producers to develop this project to this stage. We have also been approached by BBC Radio to present a concept for a series to be written and presented by Tim Rice. We have also planned a Centenary Concert of the entire work to be performed at Croke Park, Dublin on 24th April 2016 in front of a massive live audience of 80,000 and a global TV audience with simultaneous concert in the USA.


You can see our website at www.1916themusical.com and join our Facebook group to see what people are saying for real!
This is truly an epic musical piece, imagine the wonderful orchestral
score infused with Celtic rhythms, pipes, harps and flutes..... 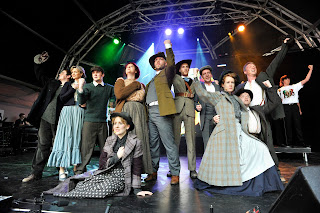 The website (http://www.1916themusical.com/) is pretty full of information, especially considering that a full production has yet to be completed.  Perhaps most importantly, there is information about the historical events being portrayed, events that most Americans probably do not know a thing about (myself included).  But that hasn't stopped us before - how much did you really know about the French Insurrection before you saw Les Miserables?  (I bet a lot of you still think it takes place during the French Revolution, like A Tale of Two Cities.  It doesn't.)  And if we can embrace the sad world of Billy Elliot, I'm pretty sure we can give this a chance, too.

Check out this video, a short documentary about the show to date, along with a rather bold announcement at the end:

And here is a bit of the show in performance at this year's West End Live (think Broadway on Broadway):

The folks associated with this show really want to hear your thoughts, so be sure to tell then what you think about what you've read and seen.