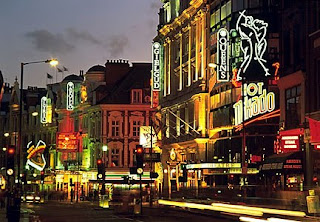 I don't know how many of you look around at London theatre sites, but if you do, you have probably noticed that many of them include links to really cool TV commercials, music videos, promotional videos and excellent b-roll previews of the shows they are promoting.

It is kind of sad that most Broadway shows don't have this, outside of links to promotional interviews, the occasional backstage "tour" or commercial.  Believe me, I'm thankful for what ever scraps they throw us.  But, still, most of it, you still have to find for yourself  on YouTube and the like.  Kudos to the major theatre sites like Playbill Online and Broadway.com for taking up the slack, proving it can be done.

Some of it I understand.  I mean regular music videos don't even get play on MTV, let alone a relatively small niche like show tunes.  Still, it is a sad commentary that a very American art form (and the performing arts) aren't more a part of our everyday popular culture. 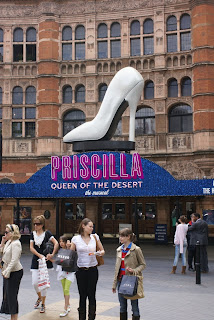 Then, too, there is the American Greed Factor and everyone shares the blame there: actors, producers, writers.  Absolutely nothing gets done without an eye toward profit and money making for everyone involved.  I don't know for sure, but I'm willing to bet part of the reason we don't see more things like they do in London because the unions won't allow it or because of haggling over profit margins or salaries or royalties.
Never mind the fact that maybe if they gave a little bit away for free (beyond promotional interviews and the rare backstage thing) it might entice people to see a show they know nothing about.  I can tell you for 100% certain that the promos for Deathtrap, La Bete and Brief Encounter have influenced my desire to see all three, and I am a VERY regular theatregoer, aka the sure thing to buy a ticket.  Imagine what it might do for the occasional, on the fence, but tired of Mamma Mia crowd!  People never see the long-range possibility...  (I could go on about ticket prices being lowered with an eye toward longer term profits rather than upfront smaller profits - if a show is crap it won't run anyway, so why not lower the prices and get more people in for a longer run?  But I digress...)

Here are some recent London videos... what do you think?  (Scroll to the bottom for maybe the best "unofficial" video for a show to date!)

Priscilla: Queen of the Desert (Cast member produced for a cast party)

Do Broadway people go to this much trouble for a cast party?  This is better than most shows, period.  If Broadway folks do, share it!  Geez, this isn't even "official" and it has gotten thousands of hits.  Any cast that has this much fun together must be tearing it up on stage.  I'd be surprised if this could happen here, though... rights, copyrights, in costume union time, blah blah blah... I hope I'm just being a cynic.  I somehow doubt it.