Tomorrow will mark the official Broadway opening night for the already critically acclaimed Brief Encounter, a play based on the Noel Coward film of the same name and a one-act play of his.

The stage version combines heightened theatricality, song and dance, and the cast interacting with filmed elements.  The story about a deeply passionate but forbidden love, is described as "sexy," "beautifully romantic," and "stunning theatricality."  I hope to see the show soon...

Anyway, let's take a look at the show's previous logo, before discussing the current promotional art for the Roandabout Theatre Company. 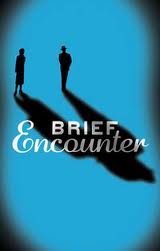 This version of the logo is wonderful in its simplicity, and relies very little on a patron's prior knowledge of the film or play upon which this show is based.﻿  But it speaks volumes.  The silhouettes of a woman and a man, small and apart certainly suggests that the two are apart for whatever reason - apart and alone.  That loneliness is likely a painful side to any romance that is not supposed to be.  Ah, but that their shadows, long and dark converge into the silhouette of an embracing couple speaks to the fact that the pair do connect and let their passions flow.  There is also a masculinity and urgency about the typography of the word "BRIEF" in all caps, just as there is a definite femininity about the cursive style of the word "Encounter."  Together it suggests a raw passion and a sweet romance.  Notice the title does not refer to the relationship as an affair.

Knowing what I know about the way the show is staged informs my assessment of the current Broadway logo, which I think is compelling, visually interesting and very much in keeping with the play patrons will see.  Of course, not having seen the show myself, yet, some of this is supposition on my part.  And since a show's logo is designed to generate new ticket sales, my point of view here is appropriate.  (I have not seen the film on which it is based, though I have seen some short clips from it.)
First of all, the way the title is printed is very telling.  Now, both words are are in that sharp, all caps font that suggests to me a definite masculinity and the lettering reminds me some how of something darker, a tinge sinister... almost "spy" like... clandestine.  And one as to assume that a story about forbidden love, an encounter, must be clandestine in nature. 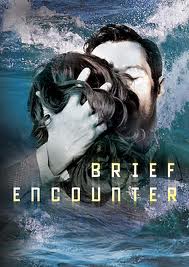 The photographic images are also an excellent choice.  The blue colored waves crashing (a nod to a key scene in the film version) suggests many things: a larger than life, cinematic sweep in scope, and a danger as the waves close in on the embracing couple in the photo, not to mention a myriad of water imagery connotations that may or may not fit the work, but certainly come to mind.  Clearly, by choosing such a large scale image as the crashing waves, we know going in that this is an epic story, told with the heightened drama of a torrid romance, and letting us know that film is an element in this production.  The other prominent photographic element, the embracing couple, is also very telling.  First, it is in black and white, telling us that this is a time ago, not current, especially against a full color background.  This image immediately transports us to another era - one where affairs were not expected or accepted as they are today.  Second, we only see their heads in tight close up.  Is this to let us know that these lovers, in spite of everything going on around them are to be our focus?  I think so.  And notice that of the two, we only see part of the man's face, eyes closed as he presses his face to hers.  Notice, though, that they are not in a kissing position, unless he is kissing her forehead or temple.  And then there is his hand, grasping her head, intertwined with some of her curls...to me it suggests a passion, but also a desperation like this is the last time he'll hold her.  That he is wearing a suit jacket also suggests that he is a man of means, a professional, not some guy off the street.  Finally, isn't it interesting that almost nothing about this tells us anything about the woman, aside from the fact that it is a woman?
When I eventually see this work (I hope!), it will be interesting to see if the logo presented really matches the show being performed.  Somehow, I think it most definitely does just that.
Comments?  Leave one here, Tweet me on Twitter or email me at jkstheatrescene@yahoo.com.
Jeff
2.27