Theatre Book Review: A Little Bit Wicked: Life, Love and Faith in Stages. By Kristin Chenoweth and Joni Rodgers.  Published by Touchstone a division of Simon and Schuster. Copyright 2009. Hardcover. 232 pages, plus 16 pages of color photographs. (NOTE: This review is NOT based on the revised Second Edition. See note at end of review.)

As you can see, I am still behind in my theatre reading.  Everyone else is salivating over Patti LuPone: A Memoir, while I am just getting around to last year's Broadway celebrity bio, A Little Bit Wicked: Live, Love and Faith in Stages, the autobiography of Kristin Chenoweth (with the help of Joni Rodgers).  My only regret is that I didn't get to it sooner!  For like the star herself, the book is sweet, honest, full of life-learned wisdom, and just a wee bit wicked.  How refreshing to read something that makes you feel like you are learning about a real person, warts, mistakes, embarrassments, triumphs and tragedies and all.  Make no mistake, while the book (as she freely admits) is not a sleazy tell-all, she certainly doesn't skimp on the details about herself that might be unflattering.  In short (no reference to the small in stature star), she is honest.  Would that every person who becomes as famous as she remain as grounded and overall selfless as Ms. Chenoweth.  Sure some hard knocks and bitter lessons learned have required her to be more careful personally and professionally.  But as this terrific, easy read of an autobiography shows, she remains open and accessible to ideas, her profession, her religion and her fans.

If you are looking for a blow by blow description of every event leading up to the opening of Wicked through Ms. C's departure from the show, you won't find it here.  While she references her biggest success to date frequently - most amusingly as she describes her legion of tranny-fans who dress like her as Glinda (Glindafied, she calls it) - not very much of the book it devoted to the show.  She briefly (as in Readers Digest) describes various changes in cast from workshop to workshop, and she does address the persistent rumor that she and Idina Menzel hate each other and that she is jealous that Menzel won the Tony.  Clearly, she is not jealous, and sounds sincerely congratulatory.  Whether they hate each other, I really doubt that, too.

But, if you are interested in Kristin Chenoweth, the person, and her rise to stardom, then this book is for you.

In a mostly conversational tone - think "cozy by a fire reminiscing" - Chenoweth does not tell her story in chronological order, but rather in almost stream-of-consciousness, letting one event or detail lead to another.  Each chapter is anchored by a significant event - the death of her grandfather, meeting her life mentor and voice teacher, Florence Birdwell, winning the Tony for You're a Good Man, Charlie Brown and having the show post closing the next morning - but each chapter also meanders back and forth as memory takes her.  Let me assure you, it is not at all confusing the way she tells it.

And while it seems that she has rarely a negative thing to say about others, she graciously tells us that there were issues between her and former boyfriends Marc Kudisch and Aaron Sorkin, but that they are none of our business.  It is fun to read her fan/co-star take on cast members from Pushing Daisies and The West Wing, and I admit to shedding a tear when she describes finding out that her great friend and co-star John Spencer passed away.

For me, the most interesting part is reading about her constant struggle to reconcile her devout Christian background with her personal beliefs.  One of the best parts is her candid discussion of her disastrous appearance on The 700 Club, which alienated her Christian fan base AND her gay fan base, and how she overcame all of that.  Then, as a follow up she explains why a Playboy spread was a no-go, while a flirty spread in FHM was something she needed to do.

I also found it interesting just how much her faith seems to - or as she believes that to be the case - have guided her career.  For example, her decision to not take a role in The West Wing because she was committed to Wicked, or how she got to work on her favorite show to date, The Apple Tree, with none other than ex-boyfriend, Marc Kudisch, are two examples of what she thought was part God, part career move.  Of particular interest to theatre fans of the 21st century, too, might be that she and best friend Erin Dilly were attached to Thoroughly Modern Millie, but neither made it to Broadway in that show... I'm thinking Kristin was Miss Dorothy... and Erin, as we know, was dismissed, and Sutton Foster became a star overnight as a result. 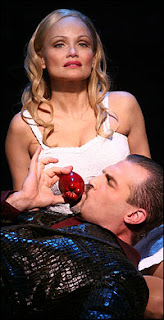 But perhaps the most heart-warming parts of the book are when she talks about her family and close friends.  Just from reading this book, I'd love to meet her other best friend, Denny, her ex-agent, Danielle, and of course, her magnificent teacher, Florence Birdwell.   Then there is her family.  By the time it is over, you feel you really know her mom, dad and brother, Mark.  And, sweetly, you find out what a blessing they were to Ms. Chenoweth, whom they adopted as a baby.  It may be old news to some "Cheno" fans, but I found her telling of her adoption, and even seeing someone she thinks might have been her birth mother, to be both touching and telling.  In genuine Kristin Chenoweth form, she thanks her birth mother for giving her life and God for giving her the family she has.

Throughout the book is laced with self-deprecating humor, some sad lows and some wonderful highs.  And along the way she has many helpful hints for those of us who aspire to the Broadway/Hollywood life.  Clearly, her support system, her belief in something bigger than all of us, some genuine luck, and a ton of talent all conspired to give the world the Kristin Chenoweth we all love and admire.  Thank God for that.

NOTE:  Since the publication of this first Edition, a Second Edition with additional material has been published.  I understand, though I have not read it, that includes more on Pushing Daisies, Promises, Promises, and her recurring role on Glee.

(The pictures included, aside from the book cover, are not from the book, but rather represent ideas expressed in the book.)